Reaching the age of adolescence of Class 8

Endocrine glands interact with each other, so that secretion of one gland may stimulate or depress the activity of another. The amount of hormone released by an endocrine gland is determined by the body's need at any given time e.g. The hypophysis produces a hormone that stimulates the thyroid to produce its hormone; in turn the thyroid secretion induces the hypophysis to produce less thyroid stimulating hormone. This is known as the `negative feedback'. This feed-back helps bring about a steady state in the body which is called as homeostasis.

VARIOUS ENDOCRINE GLANDS PRESENT IN THE HUMAN BODY ARE: 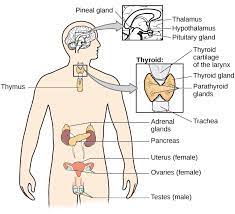 Various endocrine glands of human being

It is a small ovoid structure attached to the base of brain (hypothalamus) by a short stalk called infundibulum. Pituitary gland is also known as the master gland as it controls other endocrine glands. This gland consists of three lobes-anterior, middle and posterior.

It is a small gland reddish-grey in colour, about the size of a pea, attached to the roof of the third ventricle of the brain. It contributes in regulating gonadal development.

The thyroid gland consists of two lobes joined together by an isthmus. !t is situated in the lower part of the neck and when enlarged it forms goitre. Two hormones secreted by the thyroid gland are:

These are small ovoid glands, smaller than the size of pea. They lie on the posterior surface to the thyroid gland. Usually there are two pairs of parathyroid glands, a superior pair and an inferior pair. The parathyroid secretion, parathormone has two main functions:

This gland is situated in the thorax in midline under the sternum in front of trachea. It has 2 lobes which are further divided into many lobules. It secretes a hormone namely thymosin. It is one of the sites of lymphocyte formation in children. It helps in producing antibodies.

These are two small semilunar structures lying one each on upper pole of the kidneys. That is why they are also known as supra renal glands. Each gland consists of two separate parts known as cortex and medulla. The cortex occupies outer peripheral portion which is yellowish in colour and medulla is inner brownish part.

Cortex secretes three different kinds of hormones known as corticosteroids. They are:

Adrenal medulla is important in raising defence mechanisms and supplementing sympathetic actions in the body.

Testosterone is the main testicular hormone secreted by interstitial cells of the testis. It is mainly concerned with the development and maintenance of male sex characters and enhancing the process of spermatogenesis.