The Making Of Global World of Class 10

There took place three types of movements or flows within international economic exchange. These are as follows:

Examples: India used to export spices, tea, Rice and many other agricultural products to the rest of the world. During the nineteenth and the twentieth century’s, India emerged as a larger exporter of raw materials and importer of manufactured goods.

All these flows represented that a world economy was gradually emerging. In a world-economy, different economies get integrated and come to depend upon each other for varied needs.

(i) Pattern of food production and consumption in industrial Europe changed. Traditionally, countries liked to be self-sufficient in food. But in nineteenth-century Britain, self-sufficiency in food meant lower living standards and social conflict.

(ii) Population growth from the late eighteenth century had increased the demand for food grains in Britain, pushing up food grain prices. Under pressure from landed groups, the government restricted the import of corn, the laws allowing the government to do this were commonly known as "Corn Laws". Unhappy with high food prices, industrialists and urban dwellers forced the abolition of the Corn Laws. After the Corn Laws were scrapped, import of food was cheaper than producing it in the country itself. It resulted in farmers leaving their land uncultivated, thousands of men and women thrown out of work flocked to the cities or migrated overseas.

(iv) Transportation has to be improved, people had to settle on the lands to bring them under cultivation. This meant building homes and settlements. All these activities in turn required capital and labour. Capital flowed from financial centers such as London.

(v) In mid-nineteenth century nearly 50 million people emigrated from Europe to America and Australia. All over the world some 150 million are estimated to have left their homes, crossed oceans and vast distances over land in search of a better future. 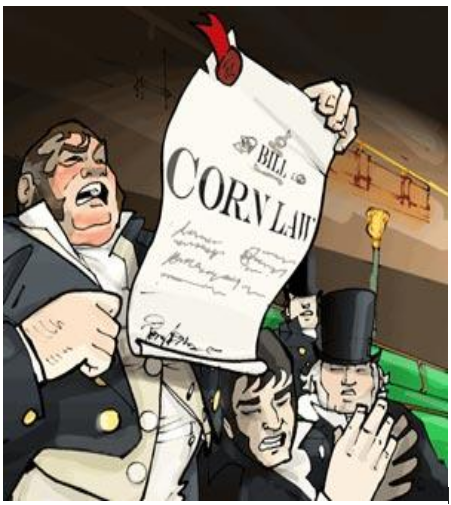 By 1890, a global agricultural economy had taken shape. Food no longer came from a nearby village or town, but from thousands of miles away. Was grown by a peasant working on a large farm, was transported by railway and ships from southern Europe, Asia Africa and the Caribbean. The British Indian government in Punjab built a network of irrigation canals to transform semi-desert wastes into fertile agricultural lands that could grow wheat and cotton for export. The Canal Colonies, as the areas irrigated by the new canals were called, were settled by peasants from other parts of Punjab. So rapidly did regional specialization in the production of commodities (cotton and rubber) develop that between 1820 and 1914 world trade is estimated to have multiplied 25 to 40 times. Nearly 60 percent of this trade comprised `primary products'- such as wheat and cotton, and minerals such as coal.

THE ROLE OF TECHNOLOGY:

The railways, steamships, the telegraph were important inventions without which we cannot imagine the transformed nineteenth-century world. Take the example of mobile phone and internet in modern world and try to imagine a world without these two important tools of communication. Refrigeration provided an effective and cheaper way to ensure availability of meat products to Europe.

Trade flourished and markets expanded in the late nineteenth century. But this was not only a period of expanding trade and increased prosperity. It is important to realise that there was a darker side to this process. In many parts of the world, the expansion of trade and a closer relationship with the world economy also meant a loss of freedoms and livelihoods. Late nineteenth- century European conquests produced many painful economic, social and ecological changes through which the colonised societies were brought into the world economy. 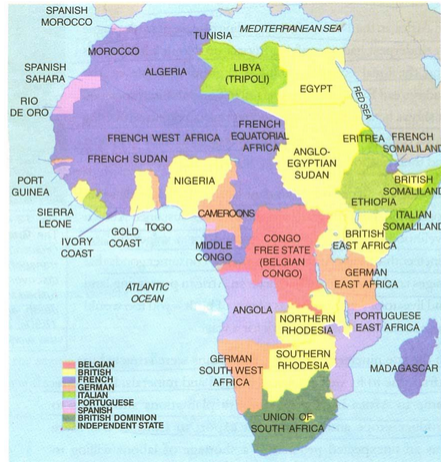 Map of colonial Africa at the end of the nineteenth century

RINDERPEST OR THE CATTLE PLAGUE:

Africa had abundant land and a relatively small population. For centuries, land and livestock sustained African livelihoods and people rarely worked for a wage. In the late nineteenth century, Europeans were attracted to Africa due to these vast resources of land and minerals, hoping to establish plantations and mines to produce crops and minerals for export to Europe. But there was unexpected problems- a shortage of labour willing to work for wages. To recruit and retain labour, heavy taxes were imposed which could be paid only by working for wages on plantations and mines. Inheritance laws were changed so that peasants were displaced from land: only one member of a family was allowed to inherit land, as a result of which the others were pushed into the labour market.

Rinderpest arrived in Africa in the late 1880s. It was carried by infected cattle imported from British Asia to feed the Italian soldiers invading Eritrea in East Africa. Entering Africa in the east, rinderpest moved west `like forest fire', reaching Africa's Atlantic coast in 1892. It reached the Cape (Africa's southernmost tip) five years later. Along the way rinderpest killed 90 percent of the cattle. The loss of cattle destroyed African livelihoods. Control over scarce resource of cattle enabled European colonizers to conquer and subdue Africa.

In the nineteenth century, hundreds of thousands of Indian and Chinese labourers went to work on plantations, in mines, and in road and railway construction projects around the world. In India, indentured labourers were hired under contracts which promised return travel to India after they had worked five years on their employer’s plantation. Most Indian indentured workers came from the present-day regions of eastern Uttar Pradesh, Bihar, central India and the dry districts of Tamil Nadu. In the mid-nineteenth century these regions experienced many changes – cottage industries declined, land rents rose, lands were cleared for mines and plantations. All this affected the lives of the poor: they failed to pay their rents, became deeply indebted and were forced to migrate in search of work.

Recruitment was done by agents engaged by employers and paid a small commission. Many migrants agreed to take up work hoping to escape poverty or oppression in their home villages. Agents also tempted the prospective migrants by providing false information about final destinations, modes of travel, the nature of the work, and living and working conditions. Often migrants were not even told that they were to embark on a long sea voyage. Sometimes agents even forcibly abducted less willing migrants.

Nineteenth-century indenture has been described as a ‘new system of slavery’. On arrival at the plantations, labourers found conditions to be different from what they had imagined. Living and working conditions were harsh, and there were few legal rights. But workers discovered their own ways of surviving. Many of them escaped into the wilds, though if caught they faced severe punishment. Others developed new forms of individual and collective self expression, blending different cultural forms, old and new. In Trinidad the annual Muharram procession was transformed into a riotous carnival called ‘Hosay’ (for Imam Hussain) in which workers of all races and religions joined. Similarly, the protest religion of Rastafarianism (made famous by the Jamaican reggae star Bob Marley) is also said to reflect social and cultural links with Indian migrants to the Caribbean. ‘Chutney music’, popular in Trinidad and Guyana, is another creative contemporary expression of the post-indenture experience.

These forms of cultural fusion are part of the making of the global world, where things from different places get mixed, lose their original characteristics and become something entirely new.

Most indentured workers stayed on after their contracts ended, or returned to their new homes after a short spell in India. Consequently, there are large communities of people of Indian descent in these countries.

From the 1900s India’s nationalist leaders began opposing the system of indentured labour migration as abusive and cruel. It was abolished in 1921. Yet for a number of decades afterwards, descendants of Indian indentured workers, often thought of as ‘coolies’, remained an uneasy minority in the Caribbean islands.