Definition of Acid and Base

Definition of Acid and Base

There are several theories to classify acids and bases, which are more-or-less different definitions of what we choose to call an acid or a base. Since it is only a matter of definition, no theory is more right or wrong than any other, and we use the most convenient theory for a particular chemical situation. Of all such theories, lets us take the three important ones.

The ionization of an acid HA in its aqueous solution can be represented by the following equation.For More Chemistry Formulas just check out main pahe of Chemsitry Formulas.

According to this concept, HCl is regarded as an acid only when dissolved in H2O and not in some other solvent such as C6H6 or when it exists in the gaseous form

For eg., the dissolution of ammonia in water can be represented as 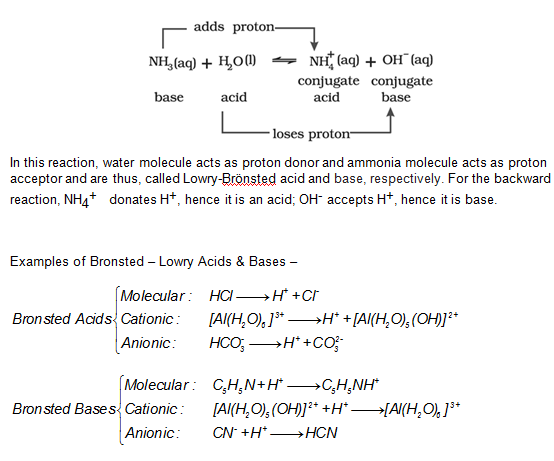 Which can be formed from each other mutually by the gain or loss of a proton are called conjugate acid - base pairs.

If in the above reaction, the acid HCl is an acid and Cl– is its conjugate base.

Similarly, H2O is a base and H3O+ is its conjugate acid.

·    Stronger a Bronsted acid is, weaker is its conjugate base.

·    Stronger a Bronsted base is, weaker is its conjugate acid.

Substance that act as an acid as well as a base is called as amphiprotic.

In fact the amphiprotic nature of H2O is well illustrated in the extremely slight dissociation or self-ionisation:

Other examples of Lewis acid-base neutralization

Any Lewis acid must contain at least one empty orbital in the valence shell of one of its atoms to accept an electron pair form a Lewis-base. Lewis - acids may be classified as:

i) Molecules containing a central atom with an incomplete octet. Typical examples of this class of acids are electron deficient molecules such as alkyls and halides of Be, B and Al. Some reactions of this type of Lewis acid with Lewis bases are shown below:

ii) Molecules containing a central atom with vacant d-orbitals. The central atom of the halides such as SiX4, GeX4, TiCl4, PCl3, PF3, SF4, SeF4, TeCl4 etc. have vacant d-orbitals. These substances can, therefore, accept an electron pair from the Lewis base to accommodate in their vacant d-orbital and can thus form adducts with a number of halide ions and organic bases. These substances are, therefore, Lewis acids. These halides are vigorously hydrolyzed by H2O to form an oxy acid or oxide of the central atom and the appropriate HX. The hydrolytic reactions take place presumably through the intermediate formation of unstable adducts with H2O. For example

iii) Simple cations. Theoretically all simple cations are potential Lewis acids. Reactions of some cations as Lewis acids with Lewis Bases are shown below. It will be seen that these reactions are identical with those which produce Werner complexes. For example, 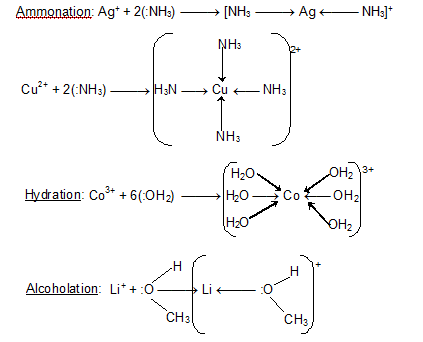 iv) Molecules having multiple bonds between atoms of dissimilar electro-negativity. Typical examples of molecules falling in this class of Lewis acids are CO2, SO2 and SO3. In these compounds the oxygen atoms are more electronegative than S– or C- atom. As a result, the electron density of p-electrons is displaced away from carbon or sulphur atoms which are less electronegative than oxygen, towards the O-atom. The C- or S-atom thus becomes electron deficient and is, therefore, able to accept an electron pair from a Lewis base such as OH– ions to from dative bond.