Gay Lussac's Law can be defined as the pressure of a given mass of any gas is directly proportional to its temperature in which volume remains constant . For More check Chemistry Formulas main page of Physics Wallah. 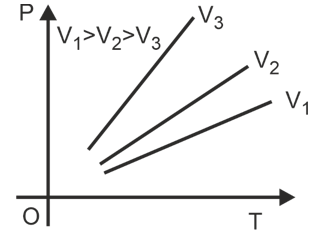 If P1 and  P2 are volumes of a gas at temperature T1 and T2 respectively and the volume is kept constant, then:

Graphically it is expressed as follows. Each line is called as Isochor. Note that slope is greater for lower volume. Volume remaining constant, the pressure of a given mass of a gas increases or decreases by 1/273 of its pressure at 0°C per degree change of temperature.

At constant volume, the pressure of a given amount of a gas is directly proportional to its absolute temperature.

Q1. A certain amount of ethane is confined in a bulb of 1 liter capacity. The bulb is so weak that it will burst if pressure exceeds 10 atm. Initially gas exerts 8 atm pressure at 27°C. Find temperature at which the bulb will burst?