For other CBSE Worksheet for class 10 Mathematic check out main page of Physics Wallah.

angles are equal then the two triangle are similar

Two triangles ABD and PQR such that ΔABC~ΔPQR

1. In the following figure AE is perpendicular to BC,D is the midpoint of BC then x is equal to: 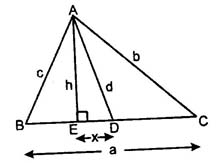 4) P and Q are the mid points of the sides AB and BC respectively of the triangle ABC, the Right angle triangle at B then,

5) ABC is a right angled triangle, right angled at A.A circle is inscribed in it. The lengths of the two sides containing the right angle are 6 cm and 8 cm, then the radius of the circle is 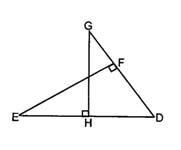 Find the lengths of segments DG and DE. 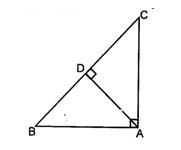 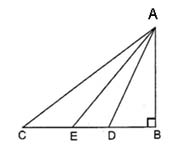 5) D, E, F are the mid points of the side AB,BC, and CA respectively of ΔABC. Findar(ΔDEF)/ar(ΔABC)

6) In figure M is the midpoint of side CD, of a parallelogram ABCD. The line BM is drawn intersecting Ac at L and AD produced at E. Prove that EL=2BL.

7) If the area of two similar triangles are in the ratio 25:64 write the ratio of their corresponding sides.

Using the above do the following