Our Environment of Class 10

An ecological pyramid is a graphical representation of an ecological parameter like number of individuals or amount of biomass or amount of energy present in various trophic levels of a food chain with producers forming the base and top carnivores from the tip. Ecological pyramids could be upright, inversed or spindle shaped. There are three important parameters of each trophic level in a food chain i.e. number of individuals, amount of biomass and amount of energy.

(i) Phytoplanktons: They are the inactive floating plants, because they do not have locomotory organs e.g. Diatoms.

(ii) Phytonektons: These plants swim actively in water, because in them locomotary organs are present. Usually flagella are present in these plants. e.g. Chlamydomonas and dinoflagellates. The number of phytoplanktons and phytonektons are higher per unit area of water because they are unicellular. 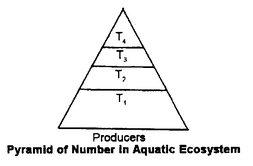 The biomass of each trophic level is shown by this pyramid. Mostly these pyramids are also upright (erect). e.g. Tree ecosystem.