1. What is the average cell cycle span for a mammalian cell?
Sol. 24 hours.

3. Describe the events taking place during interphase.
Sol. The interphase, though called the resting phase, is metabolically quite active. It is the time during which the cell prepares itself for division by undergoing both cell growth and DNA replication in an orderly manner. The interphase is further divided into three phases:
• G1 (Gap 1) phase
• S (Synthesis) phase
• G2 (Gap 2) phase
G1 phase corresponds to the interval between mitosis of previous cell cycle and initiation of DNA replication. During G1 phase the cell is metabolically active and grows continuously but does not replicate its DNA S or synthesis phase marks the period during which DNA synthesis or replication takes place. During this time the amount of DNA doubles per cell. In animal cells, during the S phase, DNA replication occurs in the nucleus, and the centriole duplicates in the cytoplasm. During the G2 phase synthesis of DNA stops while cell growth continues with synthesis of protein and RNA in preparation for mitosis.

4. What is G0 (quiescent phase) of cell cycle?
Sol. G0 phase is the phase of inactivation of cell cycle due to non-availability of mitogens and energy rich compounds. Cells in this stage remain metabolically active but no longer proliferate i.e., do not grow or differentiate unless called on to do so depending on the requirement of the organism. E.g., Nerve and heart cells of chordates are in permanent G0 phase.

6. Name the stage of cell cycle at which each one of the following events occur:
(i) Chromosomes are moved to spindle equator.
(ii) Centromere splits and chromatids
separate.
(iii) Pairing between homologous chromo-somes takes place.
(iv) Crossing over between homologous chromosomes takes place.
Sol.
(i) Metaphase
(ii) Anaphase
(iii) Zygotene of prophase I of meiosis 1
(iv) Pachytene of prophase I of meiosis I

7. Describe the following:
(a) Synapsis
(b) Bivalent
(c) Chiasmata
Draw a diagram to illustrate your answer.
Sol. (a) Synapsis: During zygotene of prophase I stage homologou s chromosomes start pairing together and this process of association is called synapsis. Electron micrographs of this stage indicate that chromosome synapsis is accompanied by the formation of complex structure called synaptonemal complex.
(b) Bivalent: The complex formed by a pair of synapsed homologous chromosomes is called a bivalent or a tetrad i.e., 4 chromatids or a pair of chromosomes. 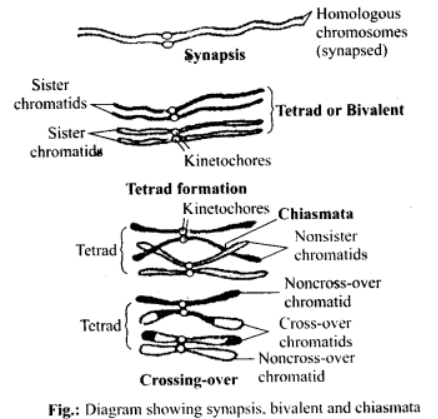 8. How does cytokinesis in plant cells differ from that in animal cells?
Sol. Plant cytokinesis and animal cytokinesis differ in following respects:

11. List the main differences between mitosis and meiosis.
Sol. 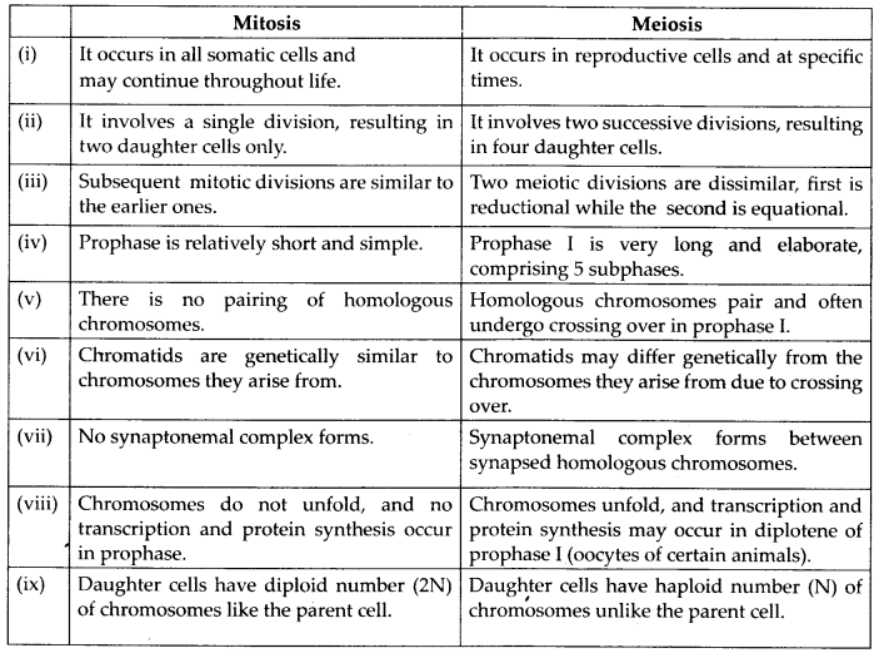 12. Distinguish anaphase of mitosis from anaphase I of meiosis.
Sol. Anaphase of mitosis : It is the phase of shortest duration. APC (anaphase promoting complex) develops. It degenerates proteins -binding the two chromatids in the region of centromere. As a result, the centromere of each chromosome divides. This converts the two chromatids into daughter chromosomes each being attached to the spindle pole of its side by independent chromosomal fibre. The chromosomes move towards the spindle poles with the centromeres projecting towards the poles and the limbs trailing behind. There is corresponding shortening of chromosome fibres. The two pole-ward moving chromosomes of each type remain attached to each other by interzonal fibres. Ultimately, two groups of chromosomes come to lie at the spindle poles. 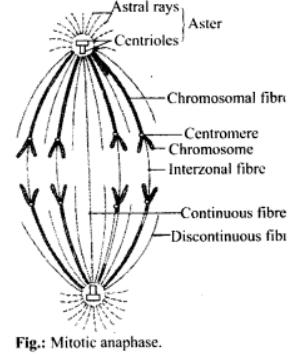 Anaphase I of meiosis : Chiasmata disappear completely and the homologous chromosomes separate. The process is called disjunction. The separated chromosomes (univalents) show divergent chromatids and are called dyads. They move towards the spindle poles and ultimately form two groups of haploid chromosomes. 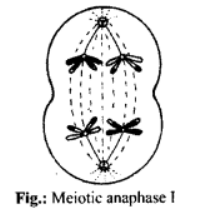 13. What is the significance of meiosis?
Sol. The significance of meiosis is given below:
(i) Formation of gametes – Meiosis forms gametes that are essential for sexual reproduction.
(ii) Genetic information – It switches on the genetic information for the development of gametes or gametophytes and switches off the sporophytic information. ‘
(iii) Maintenance of chromosome number – Meiosis maintains the fixed number of chromosomes in sexually reproducing organisms by halving the same. It is essential since the chromosome number becomes double after fertilisation.
(iv) Assortment of chromosomes – In meiosis paternal and maternal chromosomes assort independently. It causes reshuffling of chromosomes and the traits controlled by them. The variations help the breeders in improving the races of useful plants and animals.
(v) Crossing over – It introduces new combination of traits or variations.
(vi) Mutations – Chromosomal and genomic mutations can take place by irregularities of meiotic divisions. Some of these mutations are useful to the organism and are perpetuated by natural selection.
(vii) Evidence of basic relationship of organisms – Details of meiosis are essentially similar in the majority of organisms showing their basic similarity and relationship.