Air Around Us of Class 6

Air is a mixture of several gases. We cannot see air but air is everywhere around us. All living things require air. Air is necessary for the breathing of all the living things. No living things can survive without air. Though we cannot see air but we can feel its presence when it starts moving (or blowing). Moving air is called wind. When a child holds the stick of the phirki in his hand, stands in an open area and adjusts the direction of phirki blade, the phirki starts rotating. It is the moving air (or blowing air) which makes a phirki rotate. 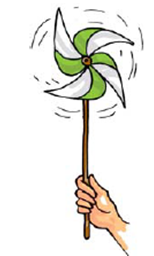 Air is transparent, so we can see through it. Air fills all the space available to it. Since air is a gaseous substance, it can be compressed easily.

The important properties of air are as follows:

Air is Present Everywhere Around Us

Air is present everywhere around us. Even those containers and vessels which appear to be empty to us are filled with air. For example, an empty bottle is not really empty, it contains air in it. Even when we turn an empty bottle upside down, the air remains in it. We can show by performing a simple activity that air occupies space and that even an empty bottle is full of air.

The envelope of air that surrounds the earth is called atmosphere. The atmosphere (or layer of air) extends up to many kilometers above the surface of earth. Atmosphere is essential for life on earth. This is because the air of atmosphere provides oxygen gas for breathing by all the living organisms including us. As we go higher up in the atmosphere, the amount of air becomes less and less. The air at the top of very high mountains is so thin that it does not have enough oxygen for the people to breathe properly. So, the people who climb high mountains (called mountaineers) carry cylinders containing oxygen gas with them. They breathe in oxygen from these cylinders (so as to survive on high mountains).