Bohr developed a model for hydrogen atom and hydrogen like one–electron species (hydrogenic species). He applied quantum theory in considering the energy of an electron bound to the nucleus.

where,m = mass of the electron

v = velocity of the electron

n = orbit number in which electron is present

r = radius of the orbit

Since the excited state is less stable, atom will lose it’s energy and come back to the ground state.

Energy absorbed or released in an electron jump, (ΔE) is given by

where E2 and E1 are the energies of the electron in the first and second energy levels, and ν is the frequency of radiation absorbed or emitted.

[Note: If the energy supplied to hydrogen atom is less than 13.6 eV, it will accept or absorb only those quanta which can take it to a certain higher energy level i.e., all those photons having energy less than or more than a particular energy level will not be absorbed by hydrogen atom. But if energy supplied to hydrogen atom is more than 13.6 eV then all photons are absorbed and excess energy appear as kinetic energy of emitted photo electron].

Consider an electron of mass ‘m’ and charge ‘e’ revolving around a nucleus of charge Ze (where, Z = atomic number and e is the charge of the proton) with a tangential
velocity v. r is the radius of the orbit in which electron is revolving.

By Coulomb’s Law, the electrostatic force of attraction between the moving electron
and nucleus is

(where ∈o is permittivity of free space)

The centrifugal force acting on the electron is

Since the electrostatic force balance the centrifugal force, for the stable electron orbit.

According to Bohr’s postulate of angular momentum quantization, we have

solving for r we get r =

Hence only certain orbits whose radii are given by the above equation are available for the electron. The greater the value of n, i.e., farther the energy level from the nucleus the greater is the radius.

Calculation of energy of an electron

The total energy, E of the electron is the sum of kinetic energy and potential energy.

Kinetic energy of the electron = ½ mv2

From equation (1) we know that

Substituting this in equation (4)

Substituting for r, gives us

This expression shows that only certain energies are allowed to the electron. Since this energy expression consist of so many fundamental constant, we are giving you the following simplified expressions.

The energies are negative since the energy of the electron in the atom is less than the energy of a free electron (i.e., the electron is at infinite distance from the nucleus) which is taken as zero. The lowest energy level of the atom corresponds to n=1, and as the quantum number increases, E becomes less negative.

When n = ∞, E = 0, which corresponds to an ionized atom i.e., the electron and nucleus are infinitely separated.

According to the Bohr’s theory electron neither emits nor absorbs energy as long as it stays in a particular orbit. However, when an atom is subjected to electric discharge or high temperature, and electron in the atom may jump from the normal energy level, i.e., ground state to some higher energy level i.e, exited state. Since the life time of the electron in excited state is short, it returns to the ground state in one or more jumps.

During each jump, energy is emitted in the form of a photon of light of definite wavelength or frequency. The frequency of the photon of light thus emitted depends upon the energy difference of the two energy levels concerned (n1, n2) and is given by

The frequencies of the spectral lines calculated with the help of above equation are found to be in good agreement with the experimental values. Thus, Bohr’s theory elegantly explains the line spectrum of hydrogen and hydrogenic species.

Bohr had calculated Rydberg constant from the above equation.

According to quantum mechanics the Rydberg constant is given by R =

Were μ is reduced mass for the atom ε0 is the permitivity of a vacuum. The reduced mass of an atom with one electron is given by

where mnuc = mass of nucleus

and me = mass of electron. For a nucleus with mass mnuc → α

By substituting for r we are getting

Where excepting n and z all are constants

Further application of Bohr’s work was made, to other one electron species (Hydrogenic ion) such as He+ and Li2+. In each case of this kind, Bohr’s prediction of the spectrum was correct.

i) The experimental value of radii and energies in hydrogen atom are in good agreement with that calculated on the basis of Bohr’s theory.

ii) Bohr’s concept of stationary state of electron explains the emission and absorption spectra of hydrogen like atoms.

iii) The experimental values of the spectral lines of the hydrogen spectrum are in close agreement with that calculated by Bohr’s theory.

i) It does not explain the spectra of atoms having more than one electron.

ii) Bohr’s atomic model failed to account for the effect of magnetic field (Zeeman effect) or electric field (Stark effect) on the spectra of atoms or ions. It was observed that when the source of a spectrum is placed in a strong magnetic or electric field, each spectral line further splits into a number of lines. This observation could not be explained on the basis of Bohr’s model.

iii) De Broglie suggested that electrons like light have dual character. It has particle and wave character. Bohr treated the electron only as particle.

iv) Another objection to Bohr’s theory came from Heisenberg’s Uncertainty Principle. According to this principle “It is impossible to determine simultaneously the exact position and momentum of a small moving particle like an electron”. The postulate of Bohr, that electrons revolve in well defined orbits around the nucleus with well defined velocities is thus not tenable.

An atom contains large number of shells and subshells. These are distinguished from one another on the basis of their size, shape and orientation (direction) in space. The parameters are expressed in terms of different numbers called quantum numbers.

Quantum numbers may be defined as a set of four numbers with the help of which we can get complete information about all the electrons in an atom. It tells us the address of the electron i.e., location, energy, the type of orbital occupied and orientation
of that orbital.

ii) Azimuthal or angular momentum quantum number (l): This represents the number of subshells present in the main shell. These subsidiary orbits within a shell will be denoted as 1,2,3,4,… or s,p,d,f… This tells the shape of the subshells. The orbital angular momentum of the electron is given as

iii) The magnetic quantum number (m):An electron due to its angular motion around the nucleus generates an electric field. This electric field is expected to produce a magnetic field. Under the influence of external magnetic field, the electrons of a subshell can orient themselves in certain preferred regions of space around the nucleus called orbitals. The magnetic quantum number determines the number of preferred orientations of the electron present in a subshell. The values allowed depends on the value of l, the angular momentum quantum number, m can assume all integral values between –l to +l including zero. Thus m can be –1, 0, +1 for l = 1. Total values of m associated with a particular value of l is given by 2l + 1.

Shapes and size of orbitals

An orbital is the region of space around the nucleus within which the probability of finding an electron of given energy is maximum (90–95%). The shape of this region (electron cloud) gives the shape of the orbital. It is basically determined by the azimuthal quantum number l, while the orientation of orbital depends on the magnetic quantum number (m). Let us now see the shapes of orbitals in the various subshells.

p–orbitals (l =1): The probability of finding the p–electron is maximum in two lobes on the opposite sides of the nucleus. This gives rise to a dumb–bell shape for the p–orbital. For p–orbital l = 1. Hence, m = –1, 0, +1. Thus, p–orbital have three different orientations. These are designated as px,py & pz depending upon whether the density of electron is maximum along the x y and z axis respectively. As they are not spherically symmetrical, they have directional character. The two lobes of p–orbitals are separated by a nodal plane, where the probability of finding electron is zero.

The three p-orbitals belonging to a particular energy shell have equal energies and are called degenerate orbitals.

lie along the axis. 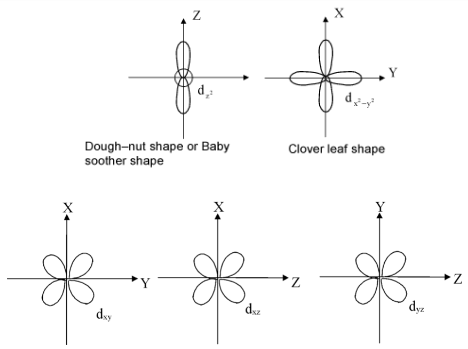 Rules for filling of electrons in various orbitals

The atom is built up by filling electrons in various orbitals according to the following rules.

Aufbau Principle: This principle states that the electrons are added one by one to the various orbitals in order of their increasing energy starting with the orbital of lowest energy. The increasing order of energy of various orbital is

How to remember such a big sequence? To make it simple we are giving you the method to write the increasing order of the orbitals. Starting from the top, the direction of the arrows gives the order of filling of orbitals. 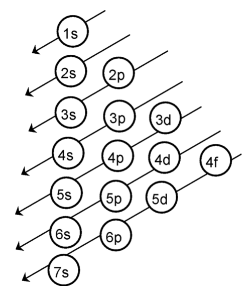 Alternatively, the order of increasing energies of the various orbitals can be calculated on the basis of (n+l) rule.

“In neutral isolated atom, the lower the value of (n+ l) for an orbital, lower is its energy. However, if the two different types of orbitals have the same value of
(n+ l), the orbitals with lower value of n has lower energy’’.

According to this principle, an orbital can contain a maximum number of two electrons and these two electrons must be of opposite spin.

Two electrons in an orbital can be represented by

This rule deals with the filling of electrons in the equal energy (degenerate) orbitals of the same sub shell (p,d and f). According to this rule,

“Electron pairing in p,d and f orbitals cannot occur untill each orbital of a given subshell contains one electron each or is singly occupied”.

This is due to the fact that electrons being identical in charge, repel each other when present in the same orbital. This repulsion can, however, be minimised if two electrons move as far apart as possible by occupying different degenerate orbitals. All the electrons in a degenerate set of orbitals will have same spin.

Electronic configuration is the distribution of electrons into different shells, subshells and orbitals of an atom .

Keeping in view the above mentioned rules, electronic configuration of any orbital can be simply represented by the notation.]

Orbital can be represented by a box and an electron with its direction of spin by arrow. To write the electronic configuration, just we need to know (i) the atomic number (ii) the order in which orbitals are to be filled (iii) maximum number of electrons in a shell, sub–shell or orbital.

a) Each orbital can accommodate two electrons

b) The number of electrons to be accomodated in a subshell is 2 × number of
degenerate orbitals.

c) The maximum number of electron in each shell (K,L,M,N…) is given by 2n2.
where n is the principal quantum number.

d) The maximum number of orbitals in a shell is given by n2 where n is the principal quantum number.

e) The number of nodal planes associated with an orbital is given by l -1.

Importance of knowing the electronic configuration

The chemical properties of an element are dependent on the relative arrangement
of its electrons.

Stability of half filled and completely filled orbitals

Cu has 29 electrons. Its expected electronic configuration is

But a shift of one electron from lower energy 4s orbital to higher energy 3d orbital will make the distribution of electron symmetrical and hence will impart more stability.

Thus the electronic configuration of Cu is

Fully filled and half filled orbitals are more stable.