The human skeleton or skeletal system is made up of 206 bones. A new born baby has 300 bones. But as it grows, some of the bones fuse together or join. Thus the number reduce from 300 to 206. 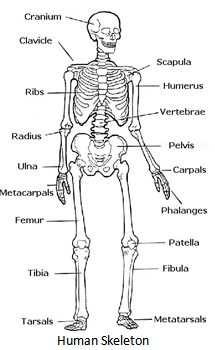 The important functions of skeleton are as follows:

Illustration 2:      What do you mean by fracture and dislocation in bones?

Solution:              Bones may crack or are completely broken in an accident. Such injuries are called fractures. Bones can also move from the original position called dislocation.

Parts of the skeleton

The bony part of our head is called skull.  It is called ‘khopri’ or ‘Kapli’ in Hindi.

The bones of the skull are the hardest of all the bones. Cranium is the box like structure around the brain.

The rest are facial bones which give shape to the face. Two bony sockets are formed by facial bones in which our eyes balls are protected. All the bones of the skull are fixed and only the lower jaw is movable which help us to eat and speak.

Illustration 3:      How many total bones are present in the human skeleton?

The backbone or the vertebral column extends from the base of the skull to the hip. It is also known as spine. This backbone and the strong back muscles help us to stand erect. The backbone is made up of 33 separate bones called vertebrae (singular Vertebra). These vertebrae are ring like and are joined end to end. The first 24 are jointed serially by cartilage. Thus it forms a hollow long tube like structure through which the main nerve cord (spinal cord) passes. The last nine vertebrae are joined together and do not move.

Illustration 4:      Which tissue is present between the vertebrae?

Running through the centre of the chest is the breastbone or sternum. Joined to it are strong, curved, flexible bones called ribs. The ribs are thin, flat, bones that form a protective cage around the heart and lungs. This is called the rib cage. The rib cage consists of 24 bones arranged in 12 pairs. All of them are joined to the backbone. 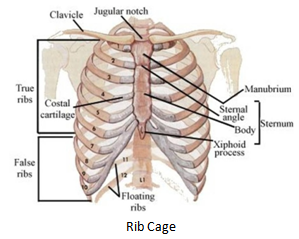 Shoulders are that part of the body (or skeleton) to which our arms are attached. There are two shoulder bones: Collar bone and shoulder blade. The upper arm fits into the socket of shoulder blade forming ball and socket joint.

Functions of the Shoulder Bone

The hip bone forms a large, basin-shaped frame at the lower end of the backbone, to which the legs are attached. The hip bone is also known as pelvic bone (or pelvis). The thigh bones of our legs are joined to the hip bone by the ball and socket joint.

Bones of the hands

Our hand is made up of three parts: wrist, palm and fingers. The wrist consists of 8 small bones known as carpals. The palm of hand is composed of 5 longer bones called metacarpals. The fingers (including thumb) are made of jointed bones called phalanges. There are 3 bones or phalanges in each finger but the thumb has only 2 bones (or phalanges). The wrist bones (carpals) form movable joint with the bones of forearm. Due to this our wrist is flexible. The palm bones (metacarpals) form movable joints with fingers. The finger bones (phalanges) form movable joints among themselves. There are five fingers in our hand including the thumb. The thumb is shorter than other fingers.

(iii)   Cartilage is found on the end of bones where they meet one another at a joint.

(iv)  Cartilage is also present (as cartilage discs) between the vertebrae of backbone.

A place where two or more bones join is called a joint. Bones are joined by tough, flexible bands of elastic tissue called ligaments. Joints are of two types - fixed and movable.

Depending on the type and extent of movement they allow, movable joints can be further classified into different types.

Ball and Socket Joints: These joints allow the greatest freedom of movement or are the most mobile. In such joints, the rounded head of one bone fits into the hollow, cup-shaped socket of another. The bone that fits into the socket is free to move in all directions around the joint. The joint of the upper arm and the shoulder bone is an example of this type of joint. That is how a bowler can lay his arm or a swimmer can rotate his arms freely. The hip joint is another ball and socket joint. 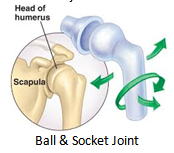 Hinge Joints: These joints work like a door hinge or a penknife. In this type of joint, the convex (slightly bulging) surface of one bone fits into the concave (slightly depressed) surface of another bone, allowing movement in only one direction. For example, the hinge joint at your elbow allows you to bend your forearm and straighten it. It does not let you bend your arm backwards or sideways. The same is true of the knee joint. 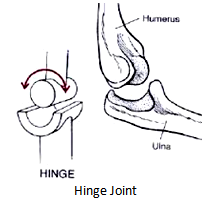 In such joints, a bony ring rotates around a pivot (axis), or stick like bone. This allows twisting movement about the joint. The head moves from side to side because it rests on a pivot joint at the top of our spine. 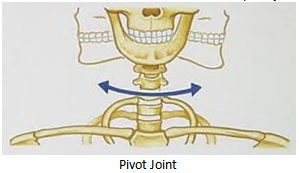 Such joints occur between the vertebrae and between the bones of the wrists and ankles. The cartilage between these bones allows small movements, somewhat like the movement. During movement, one bone slides over the other. 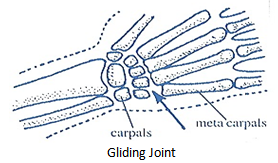 Illustration 6:      Give two examples of ball and socket joint