Different reactions occur at different rate. In fact a chemical reaction involves redistribution of bonds –– breaking of bond(s) in the reactant molecule(s) and making of bonds in the product molecule(s). The rate of a chemical reaction actually depends upon the strength of the bond(s) and number of bonds to be broken during the reaction. It takes longer time for the reactant molecules to acquire higher amount of energy which they do by collision. Hence reactions involving strong bond – breaking occur at relatively slower rate while those involving weak
bond – breaking occur at relatively faster rate. On the basis of rate, reactions are classified as.

Ionic reactions are instantaneous. If a drop of silver nitrate solution is added to a solution of the chloride salt of any metal or solution of HCl, a white precipitate of silver chloride appears within twinkling of eye. This is because of the fact that in aqueous solution an ionic compound exists as its constituent ions. No bond needs to be broken during the reaction. Hence reaction takes no time to complete. The half life period of an ionic reaction is of the order of 10–10 s.

Some molecular reactions involving reactant(s) containing odd electron completes within a fraction of second. The speed of such reactions is attributable to the tendency of the odd electron molecule (paramagnetic in nature) to transform into stable spin-paired molecule (diamagnetic) by dimerisation. An example of such reaction is the dimerisation of nitrogen dioxide into nitrogen tetraoxide as mentioned below.

There are some molecular reactions which are known to be extremely slow. Their half-lives are of the order of several years. Some examples of the type of reactions are as given below:

Note that the first reaction given above is called “rusting of iron”. The second one is not ionic reaction as it appears at the first sight. Here in this reaction it is the co-ordinate bond between central metal ion i.e. Cr3+ (acceptor) and water molecule (donor) that is broken and covalent bond between Cr3+ and I– that is formed. The half-life of this reaction is in years. 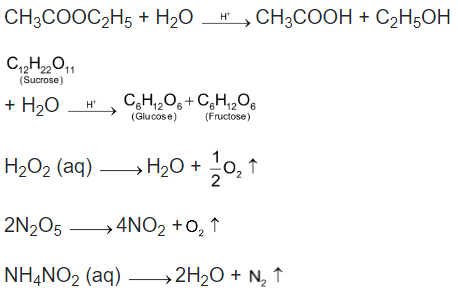 In Chemical Kinetics we deal with the rates of only those reactions which occur with measurable rate i.e. which are neither too fast nor too slow. The rates of fast reactions are also determined using lasers.