The planets move around the sun in elliptical orbits with the sun at one focus.

An ellipse with two foci F1 and F2 is shown in the figure. 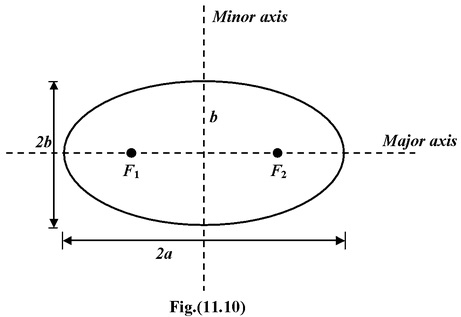 The line joining the sun to a planet sweeps out equal areas in equal time.

Suppose that in a given time interval a planet moves from A to B as shown in the figure, and from C to D during another time interval. According to the second law the areas SAB and SCD are equal. The speed of the planet, therefore, must vary during its orbit. It is greatest at the perihelion, and least at the aphelion. In example (11.5), this law is shown to be a consequence of the conservation of angular momentum.

The square of the period of planet is proportional to the cube of its mean distance from the sun.

The mean distance turns out to be the semi-major axis, a.

where κ is a constant that applies to all planets.

According to Kepler's second law of planetary motion, the line joining the sun to a planet sweeps out equal areas in equal time intervals. Show that this is a consequence of the conservation of angular momentum. The path of the planet is an ellipse.

Thus, its area is

The angular momentum of the planet is

Combining (i) and (ii) we see that

A planet moves around sun in an elliptical orbit of semi-major axis a  and eccentricity e. If the mass of sun is M, find the velocity at the perigee and apogee.

Using conservation of mechanical energy, we get

On rearranging, we get

Substituting the value of vp = va 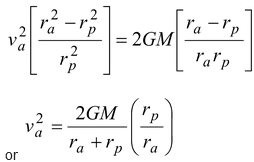 Putting the value in (i), we get

Applying energy conservation principle at infinity and at P.

where M = mass of the sun

m = mass of the body

and r = distance of closest approach.

Since the angular momentum of the body about the sun will remain conserved, therefore, 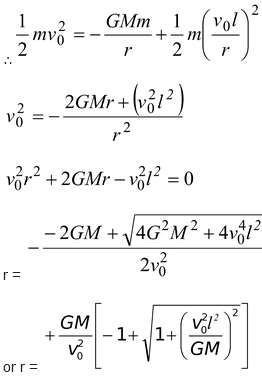 An artificial satellite of the earth (radius R and mass M) moves in an orbit whose radius is n times the radius of the earth. Assuming resistance to the motion to be proportional to the square of velocity that is F = av2. Find how long the satellite will take to fall on to the earth. 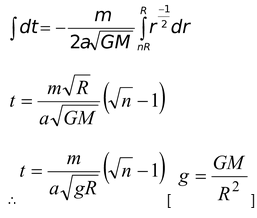 .A planet moves along an elliptical orbit around the sun. At the moment when its distance from the sun is ro, its velocity is vo at an angle α to ro. Find the maximum and minimum distance of this planet from the sun. Mass of the sun = M.

From law of conservation of angular momentum 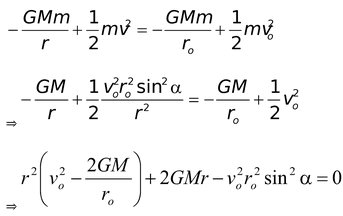 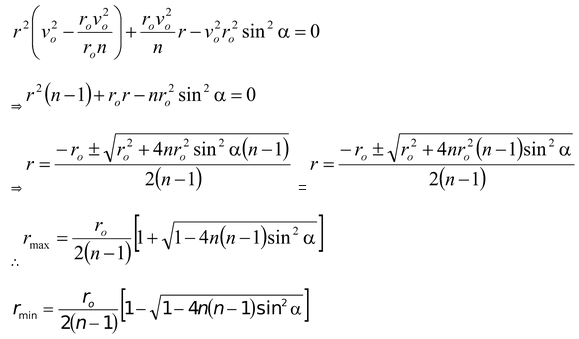 (b)If the collision is completely inelastic find the total mechanical energy immediately after collision. Describe the subsequent motion of the combined satellite.

(b)According to conservation of momentum along the tangent

Energy of the system = Gravitational energy

Since velocity = 0, system will fall vertically down.

A double star is a system of two stars moving around the centre of mass of the system due to gravitation. Find the distance between the components of the double star if the total mass equals M and time period is T.

d1 and d2 are the distances of stars from c.m. 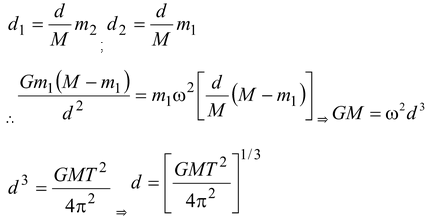