Introduction : Term was given by Zacharis,which is found in the cells of all living organisms except plant viruses, where RNA forms the genetic material and DNA is absent. In bacteriophages and viruses there is a single molecule of DNA, which remains coiled and is enclosed in the protein coat. In bacteria, mitochondria, plastids and other prokaryotes, DNA is circular and lies naked in the cytoplasm but in eukaryotes it is found in nucleus and known as carrier of genetic information and capable of self replication. Isolation and purification of specific DNA segment from a living organism achieved by Nirenberg H.Harriesis associatedwith DNA-RNA hybridization technique. 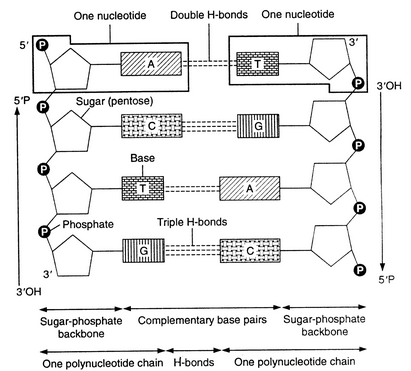 (1) Chemical composition :The chemical analysis has shown that DNA is composed of three different types of compound.

(i) Sugar molecule : Represented by a pentose sugar the deoxyribose or 2-deoxyribose which derived from ribose due to the deletion of oxygen from the second carbon.

(a) Purines :Two ring compound namely as Adenine and Guanine.

(b) Pyramidine :One ring compound included Cytosine and Thymine in RNA uracil is present instead of Thymine.

Nucleotides :In a nucleotide, purine or pyrimidine nitrogenous base is joined by deoxyribose pentose sugar (D), which is further linked with phosphate (P) group to form nucleotides.

Composition of nucleoside and nucleotides of DNA and RNA 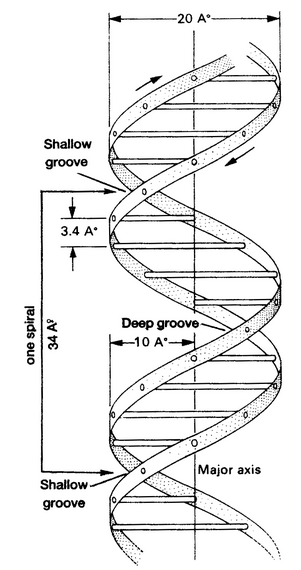 There are important features of DNA double helix.

(a) The double helix comprises of two polynucleotide chains.

(b) The two strands (polynucleotide chains)of double helix are anti-parallel due to phosphodiester bond.

(c) Each polynucleotide chain has a sugar-phosphate ‘backbone’ with nitrogeneous bases directed inside the helix.

(f) Ten base pairs occur per turn of helix (abbreviated 10bp). The spacing between adjacent base pairs is 10Å. The helix is 20Å in diameter and DNA molecule found 360o in a clockwise.

(3) Forms of DNA :Five different morphological forms of DNA double helix have been described. These are A, B, C, D and Z forms. Most of these forms (except B, and Z) occur in rigidly controlled experimental conditions. Watson and crick model represents commonest form, Biotic-form (B-form or B-DNA) of DNA. Some DNA forms are inter convertible also. The differences in these DNA forms are associated with:

(i) The numbers of base pairs, present in each turn of DNA helix.

(ii) The pitch or angle between each base pair.

(iv) The handedness of double helix. Which is mentioned in table.

Comparison of different types of DNA

(i) Denaturation or melting :The phenomenon of separating of two strand of DNA molecule by breaking of hydrogen bond at the temp. 900C.

These properties help to form hybrid from different DNA or with RNA.

(i) Bacterial transformation or Griffith's Experiments :Griffith (1928) injected into mice with virulent and smooth (S-type, smooth colony with mucilage) form of Diplococcuspneumoniae. The mice died due to pneumonia. No death occurred when mice were injected with nonvirulent or rough (R-type, irregular colony without mucilage) form or heat- killed virulent form. However, in a combination of heat killed S-type and live R-type bacteria, death occurred in some mice. Autopsy of dead mice showed that they possessed S-type living bacteria, which could have been produced only by transformation of R-type bacteria. The transforming chemical was found out by O.T.Avery, C.M. Mc. leod and M. Mc. Carty(1944). They fractionated heat-killed S-type bacteria into DNA, carbohydrate and protein fractions. DNA was divided into two parts, one with DNAase and the other without it. Each component was added to different cultures of R-type bacteria. Transformation was found only in that culture which was provided with intact DNA of S-type. Therefore, the trait of virulence is present in DNA. Transformation involves transfer of a part of DNA from surrounding medium or dead bacteria (donor) to living bacteria (recipient) to form a recombinant.

(ii) Evidence from genetic recombination in bacteria or bacterial conjugation :Lederberg andTatum (1946) discovered the genetic recombination in bacteria from two different strains through the process of conjugation. Bacterium Escherichia coli can grow in minimal culture medium containing minerals and sugar only. It can synthesize all the necessary vitamins from these raw materials. But its two mutant strains were found to lack the ability to synthesize some of the vitamins necessary for growth. These could not grow in the minimal medium till the particular vitamins were not supplied in the culture medium.

(a) Mutant strain A :It (used as male strain) had the genetic composition Met– , Bio–, Thr+, Leu+, Thi+. It lacks the ability to manufacture vitamins methionine and biotin and can grow only in a culture medium which contains these vitamins in addition to sugar and minerals.

(b) Mutant strain B :It (used as female strain or recipient) has a genetic composition Me++, Bio+, Thr–, Leu–, Thi–. It lacks the ability to manufacture threonine, leucine and thionine and can grow only when these vitamins are added to the growing medium.

These two strains of E.coliare, therefore, unable to grow in the minimal culture medium, when grow separately. But when a mixture of these two strains was allowed to grow in the same medium a number of colonies were formed. This indicates that the portion of donor DNA containing information to manufacture threonine, leucine and thionine had been transferred and incorporated in the recipient’s genotype during conjugation.

This experiment of Lederberg and Tatum shown that the conjugation results in the transfer of genetic material DNA from one bacterium to other. During conjugation a cytoplasmic bridge is formed between two conjugating bacteria.

(iii) Evidence from bacteriophage infection : Hershey and Chase(1952) conducted their experiment on T2bacteriophage, which attacks on E.coli bacterium. The phage particles were prepared by using radioisotopes of 35S and 32P in the following steps.

(a) Few bacteriophages were grown in bacteria containing 35S. Which was incorporated into the cystein and methionine amino acids of proteins and thus these amino acids with 35 S formed the proteins of phage.

(b) Some other bacteriophages were grown in bacteria having 32P. Which was restricted to DNA of phage particles. These two radioactive phage preparations (one with radioactive proteins and another with radioactive DNA) were allowed to infect the culture of E.coli. The protein coats were separated from the bacterial cell walls by shaking and centrifugation.

The heavier infected bacterial cells during centrifugation pelleted to bottom. The supernatant had the lighter phage particles and other components that failed to infect bacteria. It was observed that bacteriophages with radioactive DNA gave rise to radioactive pellets with 32 P in DNA. However in the phage particles with radioactive protein (with 35 S) the bacterial pellets have almost nil radioactivity indicating that proteins have failed to migrate into bacterial cell. So, it can be safely concluded that during infection by bacteriophage T2, it was DNA, which entered the bacteria. It was followed by an eclipse period during which phage DNA replicates numerous times within the bacterial cell. Towards the end of eclipse period phage DNA directs the production of protein coats assembly of newly formed phage particles. Lysozyme (an enzyme) brings about the lysis of host cell and release, the newly formed bacteriophages. The above experiment clearly suggests that it is phage DNA and not protein, which contains the genetic information for the production of new bacteriophages. However, in some plant viruses (like TMV), RNA acts as hereditary material (being DNA absent).

(6) DNA replication :Watson and Crick suggested a very simple mechanism of DNA replication or DNA transcription onthe basis of its double helical structure. During replication the weak hydrogen bonds between the nitrogeneous bases of the nucleotides separate so that the two polynucleotide chains of DNA also separate and uncoil. The chains thus separated are complementary to one another. Because of the specificity of base pairing, each nucleotide of separated chains attracts it complementary nucleotidefrom the cell cytoplasm. Once the nucleotides are attached by their hydrogen bonds, their sugar radicals unite through their phosphate components, completing the formation of a new polynucleotide chain.

The method of DNA replication is semi-discontinuous and described assemi-conservative method, because each daughter DNA molecule is a hybrid conserving one parental polynucleotide chain and the other one newly synthesized strand. DNA replication occur in S-phagein cell cycle. 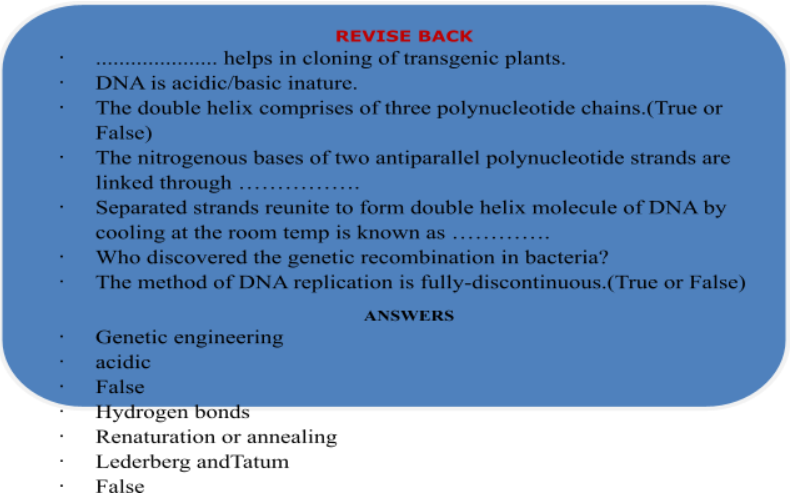