On the basis of the experiments performed and the results obtained Mendel formulated four laws. They are:

(c) The Principle of Segregation or Law of Segregation : (Law of purity of gametes) The law of segregation states that when a pair of contrasting factors or genes or allels are brought together in a heterozygous condition, the two remains together without being contaminated but when gametes are formed from them the two separate out from each other. This is also known as Mendel's first law of heredity. 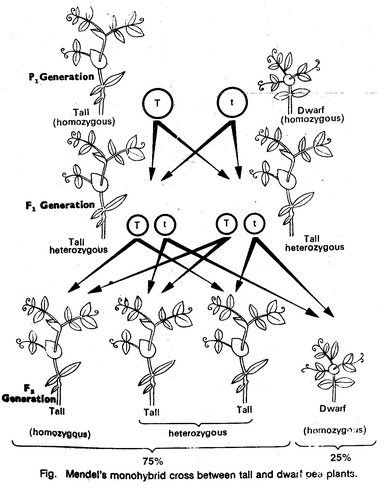 (i) Monohybrid cross :Experiments with garden pea for single pair of contrasting characters.

Hence it is to be said that in F2 generation 50% plants passes parental combination while 50% are new combination.

(b) Mendel’s explanation : Mendel explained above results by presuming that Tallness and dwarfness are determined by a pair of contrasting factors or determiners (now these are called genes). A plant is tall because it possesses determiners for tallness (represented by T) and a plant is dwarf because it has determiners for dwarfness (represented by t). These determiners occur in pairs and are received one from either parent. On the basis of this behaviour the tallness is described as dominant character and dwarfness as recessive (law of dominance).The determiners are never contaminated. When gametes are formed, these unit factors segregate so that each gamete gets only one of the two alternative factors. When F1 hybrids (Tt) are self pollinated the two entities separate out and unite independently producing tall and dwarf plants (law of segregation).

(a) Procedure :Later on Mendel conducted experiments to study the segregation and transmission of two pairs of contrasting characters at a time. Mendel found that a cross between round yellow and wrinkled green seeds (P1) produced only round and yellow seeds in F1 generation, but in F2 four types of combinations were observed. These are 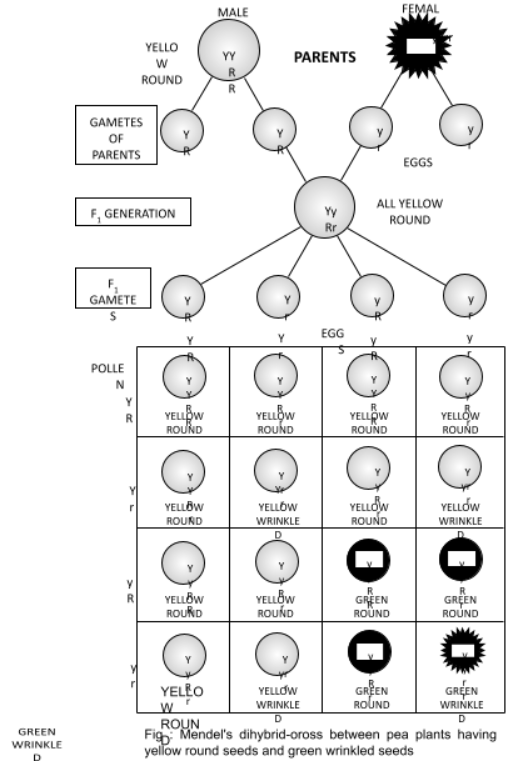 Mendel represented round character of seed by R and wrinkled by r. Similarly he designated the yellow character by Y and green by y. Therefore, it was a cross between RRYY and rryy.

(b) Mendel’s explanation : Mendel explained the results by assuming that the round and yellow characters are dominant over wrinkled and green so that all the F1offsprings are round yellow. In F2-generation since all the four characters were assorted out independent of the others, he said that a pair of alternating or contrasting characters behave independently of the other pair i.e., seed colour is independent of seed coat.

Therefore, at the time of gamete formation genes for round or wrinkled character of seed coat assorted out independently of the yellow or green colour of the seed. As a result four types of gametes with two old and two new combinations i.e., RY, ryRy, rY are formed from the F1 hybrid. These four types of gametes on random mating produced four types of offsprings in the ratio of 9:3:3:1 in F2 generation (Law of Independent Assortment).

(iii) Trihybridcross :The offsprings shows 27 : 9 : 9 : 9 : 3 : 3 : 3 : 1 ratio is found in trihybrid cross. This suggests that a di, tri, or polyhybrid cross is actually a combination of respectively two, three or more monohybrid crosses operating together

The term 'gene' was introduced by Johanssen for Mendelian factor. Ageneis a molecular unit ofheredityof a livingorganism. It is a name given to some stretches ofDNAandRNAthat code for apolypeptideor for an RNA chain that has a function in the organism. Living beings depend on genes, as they specify all proteins and functional RNA chains. 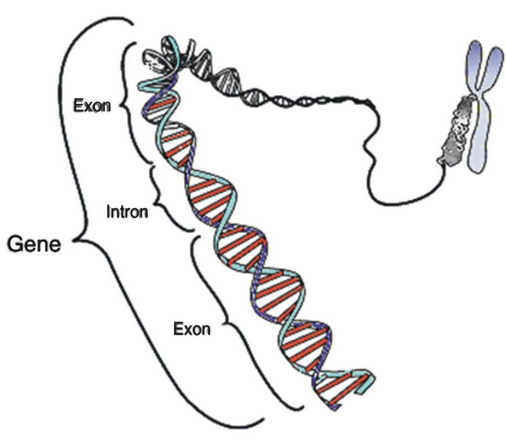 (1) Gene action :Gene act by producing enzymes. Each gene in an organism produces a specific enzyme, which controls a specific metabolic activity. It means each gene synthesizes a particular protein which acts as enzyme and brings about an appropriate change.

(i) One gene one enzyme : This theory was given by Beadle and Tatum (1958), while they were working on red mould or Neurospora (ascomycetes fungus). Which is also called Drosophila of plant kingdom. Wild type Neurospora grows in a minimal medium (containing sucrose, some mineral salts and biotin). The asexual spores i.e. conidia were irradiated with x-rays or UV-rays (mutagenic agent) and these were crossed with wild type. After crossing sexual fruiting body is produced having asci and ascospores. The ascospores produced are of 2 types -

(a) The ascospores, which are able to grow on minimal medium called ‘prototrophs’.

(b) Which do not grow on minimal medium but grow on supplemented medium called ‘ auxotrophs’.

(2) Molecular structure of gene :Gene is chemically DNA but the length of DNA which constitutes a gene, is controversial 3 term i.e.cistron, muton and recon were given by Seymour Benzer to explain the relation between DNA length and gene.

(i) Cistron or functional gene or gene in real sense :Cistron is that particular length of DNA which is capable of producing a protein molecule or polypeptide chain or enzyme molecule.

(ii) Muton or unit of mutation :Muton is that length of DNA which is capable of undergoing mutation. Muton is having one or part of nucleotide.

(iii) Recon :Recon is that length of DNA which is capable of undergoing crossing over or capable of recombination. Recon is having one or two pairs of nucleotides.

(iv) Complon :It is the unit of complementation. It has been used to replace cistron. Certain enzymes are formed of two or more polypeptide chains. Whose active groups are complimentary to each other.

(v) Operon :Operon is the combination of operator gene and sequence of structure genes which act together as a unit. Therefore it is composed of several genes. The effect of operator gene may be additive or suppresive.

(vi) Replicon :It is the unit of replication. Several replicons constitute a chromosome. 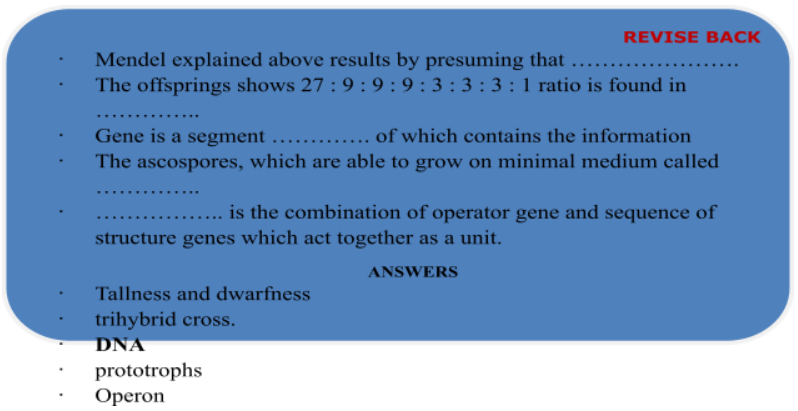