In a pure rolling motion a wheel rotates about its center of mass and the center of mass moves linearly so that it covers a distance equal to its circumference in one complete rotation.  °

Since rolling is a combination of translation of the center and rotation about the center, therefore, velocity of any point on the rim is the vector sum

The direction of the velocity vector is perpendicular to the line joining the point and the point of contact. The velocities of the point 1, 2 and 3 are shown in figure (10.22 b).

The velocity of the point A can be obtained in two ways:

Kinetic Energy of a Rolling Body

Since the rolling motion is a combination of linear velocity of the center and rotational motion about the center. Therefore, the total kinetic energy of a rolling body is given by

is the translational kinetic energy and

is the rotational kinetic energy about the center of mass

Using parallel axes theorem, the term Ic + mR2 gives the moment of inertia about the point of contact, therefore,

Note that equation (10.31) gives the rotational kinetic energy of the wheel about the point of contact.

A hoop of mass m and radius R rolls without slippage with velocity vo. Find its kinetic energy.

for the object as if it were a point−mass, that is, ignoring rotation.

α as if the object were only rotating about the centre of mass, that is ignoring translation.

4.Solve the resulting equations simultaneously for any unknown.

Figure shows a sphere of mass M and radius R that rolls without slipping down an incline. Its moment of inertia about a central axis is

(a)Find the linear acceleration of the center of mass.

(b)What is the minimum coefficient of friction required for the sphere to roll without slipping?

Since the sphere rolls without slipping, the speed of the center is v = ωR.

By differentiating it with respect to time, we get

We use equation (vi) to find the minimum coefficient of friction required for the sphere to roll without slipping.

By definition, f = μN where N = M g cosθ. Combining this with equation (vi) we have

If the coefficient of static friction is less than this value, the sphere will slip as it rolls down the incline.

A stick of length l and mass M , initially upright on a frictionless floor, starts falling. Find the velocity of its centre of mass when it touches the floor. Describe the trajectory of the centre of mass.

Using conservation of energy ,we get

Relation between ω and v

differentiating w.r.t. time , we get 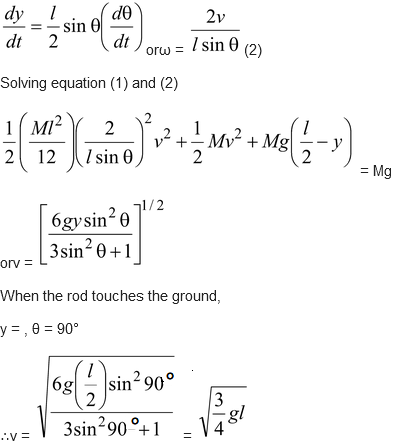