A satellite is a small body revolving around a planet.

Satellites are of two types:

The moon, our nearest neighbour in space, is a natural satellite of the earth. A satellite is a heavenly body that revolves around a planet. Of the nine planets, only mercury and venus have no satellites or moons associated with them. Mars is believed to have 2 moons, jupiter 28 moons, saturn 30 moons, uranus 21 moons, neptune 8 moons of their own. The earth, of course, has only one moon and that, being our nearest neighbour, has been explored and studied the most by the astronomers.

The moon has no air or water on it. Its diameter is about (1/4th) of the diameter of the earth and its mass is about (1/81th) that of the earth. It has no light of its own. Its observed silver glow is only due to the light of sun reflected by its surface.

The moon is very much smaller than stars but it appears bigger because of its nearness. This near neighbour is, however, still about three lakh eighty four thousand and four hundred kilometers (3,84,400 km) away from us. Its surface is covered with hard and loose dirt and it has many uplands (mountains) and valleys that are filled with dry rock materials.

The moon has a very interesting feature associated with it. It takes same time (27 days and 7 hours) to revolve around the earth as well as to spin, or rotate, once about its own axis. We on the earth, therefore, always seen only one side (the `front' side) of the moon. Its other; or `black' side is not seen from the earth. 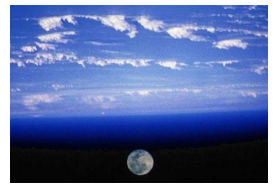 Formation of the various Phases of the Moon:

(A) When the moon is on the side of earth nearest to the sun (see position 1 in the figure), then the side of moon which is lit by sun is away from earth. And the side of moon which is towards the earth is in darkness, in this position, moon appears to be in darkness from earth. This is called new moon. The new moon day is called `Amavasya'. In fact, we cannot see the moon at all on the new moon day (or Amavasya). So, the new moon night (or Amavasya Night) is very dark having no moonlight at all. 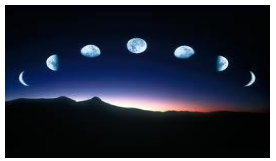 (B) As the moon moves in its orbit around the earth from position 1 to 2, we can see a small sun-lit portion of its surface. This is called crescent moon. As the moon moves further from position 2 to position 3 and 4, the sun-fit portion of moon facing the earth becomes bigger and bigger giving us half moon and more than half moon. This is called the waxing phase (increasing phase) of the moon.


(C) After two weeks time from new moon day, the moon reaches in position 5 which is on the side of the earth farthest from the sun. In this position whole sun-lit side of the moon is towards the earth, and we see the moon as a full round disc of bright light. This is called full moon. The full moon day is called `Purnima'. The full moon night (or Purnima Night) is very bright because we have the maximum moonlight on that night.

From the above disscussion we conclude that we have 'Amavasya' on the new moon day which changes in two weeks' time into Purnima. And during the next two weeks, Purnima changes into Amavasya again. This process is repeated again and again.

Artificial satellites have many practical applications. They are used for forecasting weather, transmitting television and radio signals. They are also used for telecommunication and remote sensing.