SOUND NEEDS A MATERIAL MEDIUM FOR ITS PROPAGATION

An electric bell is enclosed inside an inverted bell jar by hanging from the rubber cork. The jar is closed at the bottom by an airtight place with a hole in the centre. A pipe through the hole leads out to a vacuum pump (pump which draw the air out a vessel). 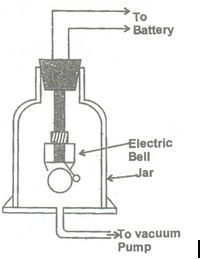 The bell is connected to a battery through a key.

The bell is started by closing the key. Initially when jar has normal air inside it, sound waves produced by the ringing bell heard outside the jar.

The vacuum pump is started and the air from inside the jar is gradually drawn out. With decreases air inside the jar, sound heard becomes weaker and weaker. After sometime no sound is heard, though the bell hammer is seen in vibration.

In the absence of medium (air) around the source, sound is not being propagated.

A natural fact: Moon has no atmosphere. The space above the atmosphere is also vacuum. If some explosion takes place on moon, sound of the explosion will not be propagated to the earth. So the sound waves never reach the earth.

A wave is a vibratory disturbance in a medium which carries energy from one point to another, without there being a direct contact between the two points.

(a) Type of waves on the basis of material medium 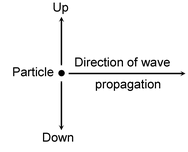 The ‘depression’ or ‘hollow’ in a transverse wave is called trough. In other words, a trough is that part of the transverse wave (B and D) which is below the line of zero disturbance.

Wave motion is a form of disturbance (a mode of energy transfer) which is due to repeated vibrations of the particles of the medium about their mean positions and the motion is handed over from one particle to the other without any net transport of the medium.

Sound as a Longitudinal Wave:

Sound produced by the object from vibration is known as mechanical wave. The vibrations produced the sound of the object becausethe particles in the surrounding medium transport  vibrational motion, thus transporting energy through the medium then sound produced. For a sound wave traveling through any medium like air, the vibrations of the particles are best described as longitudinal waves. Longitudinal waves are waves in which the motion of the individual particles of the medium is in a direction that is parallel to the direction of energy transport by the waves. A longitudinal wave can be created in a slinky if the slinky is stretched out in a horizontal direction and the first coils of the slinky are vibrated horizontally. Each individual coil of the medium is set into vibrational motion in directions parallel to the direction that the energy is transported.

Production of compressions and rarefactions near a source of sound:

Air is best example because air is the most common medium through which sound travels and it does so easily with the help of intervening layers of air. A source of sound puts the particles of the medium into vibratory motion. We can understand this by the experiment - Let us consider a vibrating tuning fork as a source of sound.

(a) When the right prong moves from left (L) to right (R), it compresses the layer of air in front of it. This results in the increase of the pressure as well as density of this layer. This layer (or region) of compressed air is called a compression. 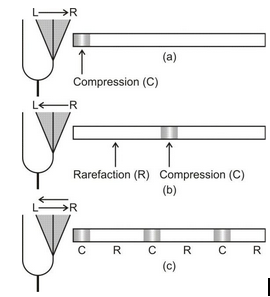 (b) When the prong moves from its right extreme (R) to left extreme (L), the air in front of it expands. As a result, the pressure (as well as density) of this layer decreases. This region of rarefied air is called a rarefaction.

Characteristics of a Sound Wave:

As already discussed, sound waves are produced due to variations in pressure and density of the medium. The various other characteristics are:

A compression and rarefaction is formed when the particles of the medium lie farther apart than the normal distance. 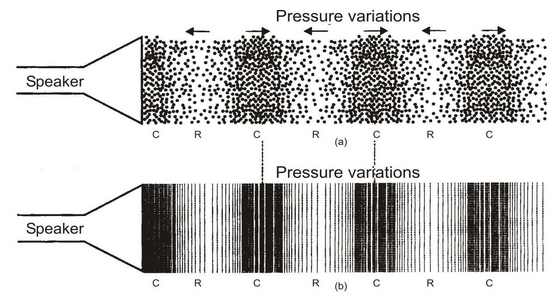 The graphical representation of sound wave is given below :

If the frequency of the wave is ν, then from the definition of frequency,

And time taken for completing 1 oscillation =

Speed of sound is the distance travelled by the sound wave per unit time. It is denoted by v and is measured in metre/second (m/s).

From the definition of wavelength,

Distance travelled by sound wave in a periodic time (T) = wavelength (λ) of the sound wave.

where ν is the frequency of the sound wave.

If two of the three quantities are known, the third quantity can be obtained from equation (1).

Thus, to describe a sound wave, we need to know :