Work, Life And Leisure of Class 10

(i) The simple city is changed in to modern metro city.

(ii) The city has the features of big markets having big shops with variety of commodities.

(iii) Bullock cart is replaced by variety of means of transport such as water ways on river Ganges, trains buses etc.

(iv) There is a High court and a remarkable museum.

(v) Flourished trade and commerce, schools and colleges for education and variety of job opportunities. Besides these features Calcutta city changed a lot.

(i) Anti social activities like theft and cheating were also growing.

(ii) The extreme gap between poor and rich.

(iii) Big industries spoiled the environment. Problems of sanitation and poor housing were also there.

(iv) Distinction on the basis of caste, creed and gender-the predominant features of Hindu society were in a changed position.

(v) The city was in transitional state having contradictory experience such as extreme wealth and poverty, opportunities and frustration, glamour and dirt. God Brahma was cheated while buying the glasses. The creator of world, Brahma was astonished by splendid form of city as cited in the novel of Durga Charan Ray.

CHARACTERISTICS OF THE CITY:

Towns and cities that first appeared along river valleys, such as Ur, Nippur and Mohenjodaro, were larger in scale than other human settlements. Ancient cities could develop only when an increase in food supplies made it possible to support a wide range of non-food producers. Cities were often the centres of political power, administrative network, trade and industry, religious institutions, and intellectual activity, and supported various social groups such as artisans, merchants and priests.

Cities themselves can vary greatly in size and complexity. They can be densely settled modern-day metropolises, which combine political and economic functions for an entire region, and support very large populations. Or they can be smaller urban centres with limited functions.

INDUSTRIALISATION AND THE RISE OF THE MODERN CITY IN ENGLAND:

Industrialization changed the form of urbanisation in the modern period. However, even as late as the 1850s, many decades after the beginning of the industrial revolution, most Western countries were largely rural. The early industrial cities of Britain such as Leeds and Manchester attracted large numbers of migrants to the textile mills set up in the late eighteenth century. In 1851, more than three-quarters of the adults living in Manchester were migrants from rural areas.

London can be an ideal example of development of a city. By 1750, one out of every nine people of England and Wales lived in London. It was a colossal city with a population of about 675,000. Over the nineteenth century, London continued to expand. Its population multiplied fourfold in the 70 years between 1810 and 1880, increasing from 1 million to about 4 million. 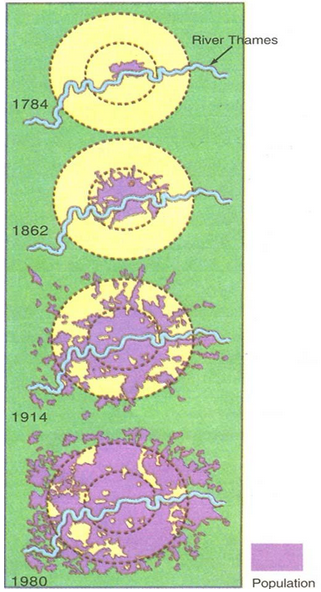 The Growth of London, a map showing its population in our different eras.

The city of London was a powerful magnet for migrant populations, even though it did not have large factories. ‘Nineteenth century London,’ says the historian Gareth Stedman Jones, ‘was a city of clerks and shopkeepers, of small masters and skilled artisans, of a growing number of semi skilled and sweated outworkers, of soldiers and servants, of casual labourers, street sellers, and beggars.’