Question 2: Fill in the blanks.

(i) The blood from the heart is transported to all parts of the body by the______.

(iv) The rhythmic expansion and contraction of the heart is called ___ _ _.

(viii) Water reaches great heights in the trees because of suction pull caused by ______.

(i) The blood from the heart is transported to all parts of the body by the _arteries__.

(iii) Arteries and veins are joined by a network of __capillaries__.

(iv) The rhythmic expansion and contraction of the heart is called __heart beat__.

(v) The main excretory product in human beings is __urea__.

(viii) Water reaches great heights in the trees because of suction pull caused by __transpiration__.

(a) In plants, water is transported through

(iv)covered with a polythene bag

Question 4: Why is transport of materials necessary in a plant or in an animal? Explain.

Answer: Transport of materials is necessary in both plants and animals as every cell needs a regular supply of nutrients and oxygen for releasing energy through respiration. The food that we eat is broken down into smaller components to be absorbed by the cells. The oxygen that we inhale is also transported to all the cells of the body. Our body also requires a constant removal of waste materials such as carbon dioxide. For the transport of all these materials (food, oxygen, and wastes), our body has a specialised transport system. Similarly, in plants, the transport of water and food is accomplished with the help of a complex transport system.

Question 5: What will happen if there are no platelets in the blood?

Answer: If there are no platelets in the blood, then the blood would not be able to clot. A clot is formed because of platelets. They release blood clotting chemicals at the site of injury. These chemicals form a clot and prevent further bleeding.

Question 6: What are stomata? Give two functions of stomata.

Stomata are tiny pores present on the surface of a leaf.

(a) Stomata help in the exchange of gases.

(b) Evaporation of water from the leaf surface occurs through stomata. 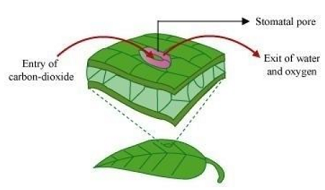 Question 7: Does transpiration serve any useful function in the plants? Explain.

Answer: Transpiration is the evaporation of water from the plants. The water evaporates through the stomata present on the surface of the leaves.

Transpiration is mainly responsible for the loss of water that was absorbed by the plants. However, it is important for plants as it helps in the movement of water to the top of tall trees. As a result, it helps in the distribution of water throughout the plant body. It also helps in cooling the plant.

Question 8: What are the components of blood?

Answer: The main components of blood are 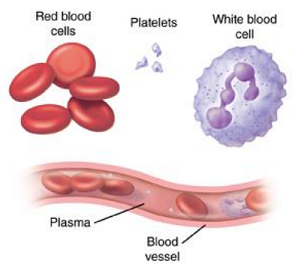 (ii) White blood cells (WBCs): WBCs are colourless cells without haemoglobin. They fight against infections and protect the body from foreign particles such as germs and bacteria.

(iii) Platelets: Platelets are the smallest cells in the blood. The main function of platelet is to prevent bleeding.

Question 9: Why is blood needed by all the parts of a body?

Answer: Blood is needed by all parts of the body as it is an important part of the transport system of our body. It performs the following important functions:

(i) It transports O2 from the lungs to all the body cells.

(ii) It carries CO2, a waste product back to the lungs so that it can be exhaled easily.

(iv) It also fights off diseases and infections.

Answer: The presence of haemoglobin, a red pigment in the red blood cells (RBCs) makes blood appear red in colour. The haemoglobin carries oxygen and transports it to all the parts of the body.

Question 11: Describe the function of the heart. 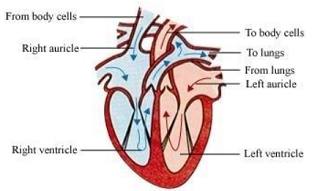 Flow of blood in the human heart

Hence, the rhythmic contraction and expansion of various chambers of the heart maintains the transport of oxygen to all parts of the body.

Question 12: Why is it necessary to excrete waste products?

Question 13: Draw a diagram of the human excretory system and label the various parts. 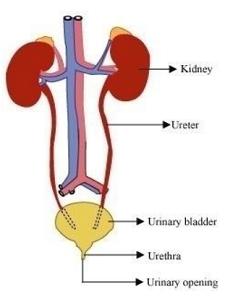