Question 1: Classify the changes involved in the following processes as physical or chemical changes:
(a) Photosynthesis
(b) Dissolving sugar in water
(c) Burning of coal
(d) Melting of wax
(e) Beating aluminium to make aluminium foil
(f) Digestion of food

Answer: (a) False
Cutting a log of wood into pieces is a physical change.
(b) False
Formation of manure from leaves is a chemical change.
(c) True
(d) False
Iron and rust are different substances. Rust is iron oxide Fe2O3
(e) True

Answer: (a) When carbon dioxide is passed through limewater, it turns milky due to the formation of calcium carbonate (CaCO3) .
(b) The chemical name of baking soda is sodium hydrogen carbonate.
(c) Two methods by which rusting of iron can be prevented are galvanization and painting.
(d) Changes in which only physical properties of a substance change are called physical changes.
(e) Changes in which new substances are formed are called chemical changes.

Question 7: Explain why burning of wood and cutting it into small piece are considered as two different types of changes.
Answer: When we burn wood, a new substance, coal, is formed. Therefore, it is a chemical change. However, when we cut wood, only the shape and size of the wood are changed. No new substance is formed. Therefore, it is a physical change.

Question 8: Describe how crystals of copper sulphate are prepared. 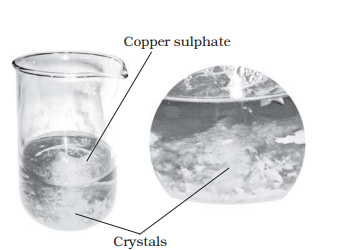 Question 9: Explain how painting of an iron gate prevents it from rusting.

Answer: Rusting is aided by both moisture (water) and air (oxygen). By painting an iron gate, we prevent its contact from the air and moisture present in the atmosphere. Hence, rusting is prevented.

Question 10: Explain why rusting of iron objects is faster in coastal areas than in deserts.

Answer: (ii) Process − B is a chemical change.

Answer: (iii) Both processes A and B are chemical changes.

Question 1: Describe two changes that are harmful. Explain why you consider them harmful? How can you prevent them?

Answer: (i) Rusting: If a piece of iron is open for some time, it acquires a film of brownish substance. This substance is called  rust and the process is called rusting.

Rusting is harmful because it destroys the iron objects. Iron is the most  widely used metal and so rusting is such a serious problem.

Prevention of rusting: Rusting can be prevented by preventing iron articles from coming in contact with oxygen, or water, or both.

• One simple way is to apply a coat of paint or grease. In fact, these coats should be applied  regularly to prevent rusting .

• Another way is galvanization, i.e., to deposit a layer of metal like chromium or zinc on iron.

(ii) Spoilage of food: Food item when kept carelessly, get spoiled. This is a chemical change and obviously harmful for us.

Food is spoiled by microorganisms.

Question 2:Take three glass bottles with wide mouths. Label them A,B and C. Fill about half of bottle A with ordinary tap water. Fill bottle B with water which has been boiled for several minutes, to the same level as in A. In bottle C, take the same   boiled water and of the amount as in other bottles. In each bottle put a few similar iron nails so that they are completely under water. Add a    teaspoonful of cooking oil to the water in bottle C so it forms a film on its surface. Put the bottles away for a few days. Take out nails from each bottle and observe them. Explain your observations.

The nails in bottles B rust  a little, nails in A are the most rusted and that in C remain unchanged.

For rusting both water and oxygen are necessary. Both the factors are present in the bottle A since oxygen is dissolved  in water.

In bottle B, water is boiled and hence dissolved air is removed. Due to lack of oxygen, iron nails do not rust much.

In bottle C, the layer of oil present prevents dissolving of atmospheric air in the water and hence no rusting occurs.

Answer: A cupful of water  taken in beaker and a few drops of dilute sulphuric acid are added into it. The water is heated. When it starts boiling alum powder is added slowly while stirring continuously. Alum powder is added continuously till no more powder can be dissolved. The solution is filtered and allowed to cool down. Crystals of alum slowly form at the bottom of the beaker. 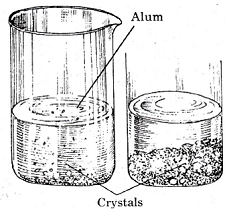 Question 4:Collect information about the types of fuels used for cooking in your area. Discuss with your teachers/parents/others which fuels are less polluting and why ?

Among all these, biogas and  LPG are least polluting. Both of these burn completely and do not give smoke. Also they do not  leave any residue (ash, unburnt part, etc.)