1. What are the factors affecting the rate of diffusion?

Sol. Factors affecting the rate of diffusion are :

• Density – Rate of diffusion of a substance is inversely proportional to square root of its relative density (Graham’s Law).

• Permeability of medium – Rate of diffusion decreases with density of the medium.

• Temperature – A rise in temperature increases the rate of diffusion with Q10 = 1.2 -1.3. Because of it sugar crystals do not dissolve easily in ice cold water while they do so easily in warm water.

2. What are porins? What role do they play in diffusion?

Sol. The porins are proteins that form huge pores in the outer membranes of the plastids, mitochondria and some bacteria allowing molecules up to the size of small proteins to pass through. Thus they play an important ‘ role in facilitated diffusion.

3. Describe the role played by protein pumps during active transport in plants.

Sol. Active transport uses energy to pump molecules against a concentration gradient. Active transport is carried out by membrane play a major role in both active as well as passive transport. Pumps are proteins that use energy to carry substances across the cell membrane. These pumps can transport substances from a low concentration to a high concentration (‘uphill’ transport). E.g.,H+ pump,K+ pump, Cl- pump, Na+-K pump.The pumps operate with the help of ATP.K+-H+ exchange pump occurs in guard cells. Na+-K+ exchange pump operates across many animal membranes. Transport rate reaches a maximum when all the protein transporters or pumps are being used or are saturated.Like enzymes these carrier proteins are very specific in what they carry across the membrane. These proteins are sensitive to inhibitors that react with protein side chains.

4. Explain why pure water has the maximum water potential.

5.Briefly describe water potential. What are the factors affecting it?

6. What happens when a pressure greater than the atmospheric pressure is applied to pure water or a solution?

Sol. If a pressure greater than atmospheric pressure is applied to pure water or a solution, its water potential increases. It is equivalent to pumping water from one place to another. Pressure can build up in a plant system when water enters a plant cell due to diffusion causing a pressure built up against the cell wall, it makes the cell turgid.

7. (a) With fhe help of well-labelled diagrams, describe the process of plasmolysis in plants, giving appropriate examples.

(b) Explain what will happen to a plant cell if it is kept in a solution having higher water potential. 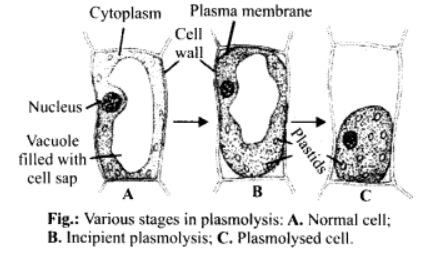 (ii)Salting kills the weeds of lawns by inducing plasmolysis in their cells.

(iii)Plasmolytic method is applied for the determination of osmotic pressure of a cell in the laboratory.

8.How is the mycorrhizal association helpful in absorption of water and minerals in plants?

Sol. Some plants have additional structures associated with them that help in water (and mineral) absorption. A mycorrhiza is a symbiotic association of a,fungus with a root system. The fungal filaments form a network around the young root or they penetrate the root cells. The hyphae have a very large surface area that absorb mineral ions and water from the soil from a much larger volume of soil that perhaps a root cannot do. The fungus provides minerals and water to the roots, in turn the roots provide sugars and N-containing compounds to the mycorrhizae. Some plants have an obligate association with the mycorrhizae. For example Pinus seeds cannot germinate and establish without the presence of mycorrhizae.

9.What role does root pressure play in water movement in plants?

Sol. As various ions from the soil are actively transported into the vascular tissues of the roots, water follows (its potential gradient) and increases the pressure inside the xylem. This positive pressure is called root pressure, and can be responsible for pushing up water to small heights in the stem. Root pressure can, at. best, only provide a modest push in the overall process of water transport. They obviously do not play a major role in water movement up tall trees. The greatest contribution of root pressure may be to re-establish the continuous chains of water molecules in the xylem which often break under the enormous tensions created by transpiration.

10.Describe transpiration pull model of water transport in plants. What are the factors influencing transpiration? How is it useful to plants?

Sol.Transpiration pull or cohesion-tension theory was originally proposed by Dixon and Joly in 1894 and further improved by Dixon in 1914. According to this theory, a continuous

column of water is present in the xylem channels of plant. The continuity of water column is maintained in the plant because of cohesive force of water molecules. There is another force of adhesion which holds water tp the walls of xylem vessels. During transpiration in plants, water is lost, in form of water vapour, from the mesophyll cells to exterior, through stomata. As a result, the turgor pressure of these cells decreases and the diffusion pressure deficit (DPD) increases. Now these cells take water from adjoining cells and the turgor of those adjoining cells decreases. This process is repeated and ultimately water is absorbed from nearest xylem vessels of leaf. As there is a continuous water column inside the xylem elements, a tension or pull is transmitted down and finally transmitted to root, resulting in the upward movement of water.

(ii)Atmospheric temperature – A high temperature opens stomata even in darkness. Besides producing a heating effect, it lowers the relative humidity of the air and increases vapour pressure inside transpiring organ. Consequently, rate of transpiration increases.

(iii)Light – Because most of the transpiration occurs through stomata, the rate of transpiration is quite high is light. It falls down appreciably in the darkness.

(iv)Air movements – Transpiration is lower in the still air because water vapours accumulate around the transpiring organs and reduce the DPD of the air. The movement of the air increases the rate of transpiration by removing the saturated air around the leaves.

(vi)Availability of water – The rate of transpiration depends upon the rate of absorption of soil water by roots. This is further influenced by a number of soil factors like soil water, soil particles, soil temperature, soil air, etc.

(i) Leaf area (transpiring area) – A plant with large leaf area will show more transpiration than another plant with less leaf area.

(a) Cuticular transpiration decreases with the thickness of cuticle and cutinisation of epidermal walls.

(b) Because most of the transpiration takes place through the stomata, their number and position influences the rate of transpiration.

(c) The sunken stomata are device to reduce the rate of transpiration by providing an area where little air movement occurs.

(iv)Mucilage and solutes – They decrease the rate of transpiration by holding water tenaciously.

Transpiration is useful to plants in the following ways:

(i) Removal of excess water – It has been held that plants absorb far more amount of water than is actually required by them. Transpiration, therefore, removes the excess of water.

(ii)Root system – Transpiration helps in better development of root system which is required for support and absorption of mineral salts.

(iii)Quality of fruits – The ash and sugar content of the fruit increases with the increase in transpiration.

(iv)Temperature maintenance – Transpiration prevents overheating of leaves. However, plants growing in areas where transpiration is meagre do not show over¬heating. Some succulents can endure a temperature of 60°C without any apparent damage.

(vi)Distribution of mineral salts- Mineral are mostly distributed by rising column of sap.

11.Discuss the factors responsible for ascent of xylem sap in plants.

Sol. Xylem sap ascends mainly due to forces generating in the foliage of plants as a result of active transpiration. Thus, the factors which enhance the rate of transpiration are also the factors responsible for ascent of xylem sap in plants.

Various factors responsible for ascent of xylem sap in plants are as follows:

(i) Capillarity: There is limited rise of water in narrow tubes or capillaries due to forces of cohesion amongst molecules of water and their property of adhesion to other substance.

(ii)Root pressure: It is positive pressure that pushes sap from below due to active absorption by root.

(iii)Transpiration pull: Transpiration in aerial parts brings the xylem sap under negative pressure or tension due to continuous withdrawal of water by them. Water column does not break due to its high tensile strength related to high force of cohesion and adhesion.

12.What essential role does the root endodermis play during mineral absorption in plants?

Sol. Like all cells, the endodermal cells have many transport proteins embedded in their plasma membrane; they let some solutes cross the membrane, but not others. Transport proteins of endodermal cells are control points, where a plant adjusts the quantity and types of solutes that reach the xylem. Because of the layer of suberin, the root endodermis has the ability to actively transport ions in one direction only.

Sol. Transport over longer distances proceeds through the vascular system (the xylem and the phloem) and is called translocation. In rooted plants, transport in xylem (to water and minerals) is essentially unidirectional, from roots to the stems. Organic and mineral nutrients however, undergo multidirectional transport. Food, primarily sucrose, is transported by the vascular tissue, phloem, from a source to a sink. Usually the source is part of the plant which synthesises the food,

i.e., the leaf, and sink, the part that needs or stores the food. But, the source and sink may be reversed depending on the season, or the plant’s needs. Since the source-sink relationship is variable, the direction of movement in the phloem can be upward or downward, i.e., bi-directional. Hence, unlike one-way flow of water in xylem, food in phloem tissues can be transported in any required direction.

14.Explain pressure flow hypothesis of translocation of sugars in plants.

Sol. The accepted mechanism used for the translocation of sugars from source to sink is called the pressure flow hypothesis. As glucose is prepared at the source i.e., in leaves, (by photosynthesis) it is converted to sucrose (a dissacharide). The sugar is then moved in the form of sucrose into adjacent companion cells and then into the living phloem i.e., in sieve tube cells by active transport. This process of loading at the source produces a hypertonic conditions in the phloem. Water in the adjacent xylem moves into the phloem by osmosis. As osmotic pressure builds up, the phloem sap will move to areas of lower pressure. At the sink, osmotic pressure must be reduced. Again active transport is necessary to move the sucrose out of the

phloem sap and into the cells which will use the sugar converting it into energy, starch, or cellulose. As sugars are removed, the osmotic pressure of the phloem decreases and water moves out of the phloem 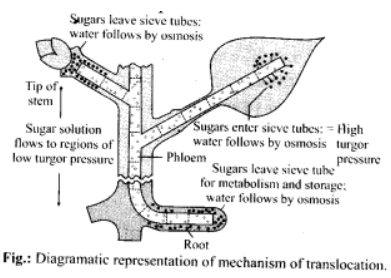 15.What causes the opening and closing of guard cells of stomata during transpiration?

16.Differentiate between the following:

(a) Diffusion and Osmosis

(b) Transpiration and Evaporation

(e) Apoplast and Symplast pathway of movement of water in plants

Sol.(a) Differences between diffusion and osmosis are as follows : 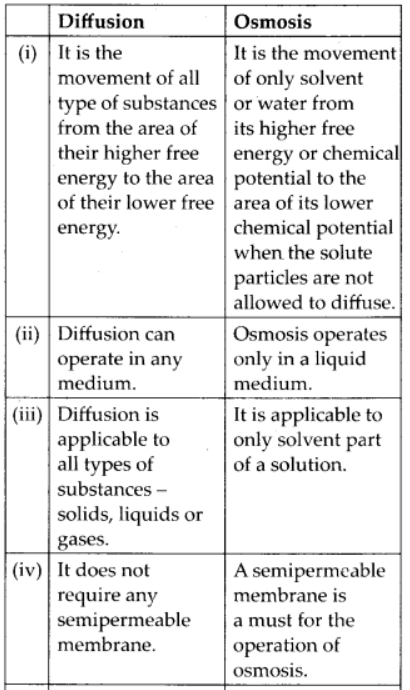 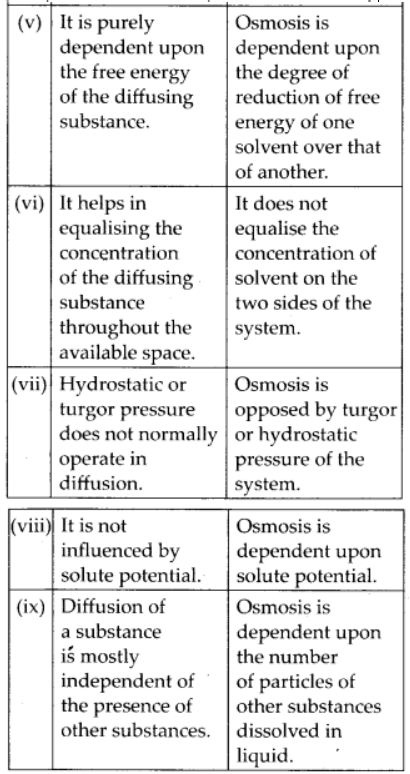 (b) Differences between transpiration and evaporation are as follows: 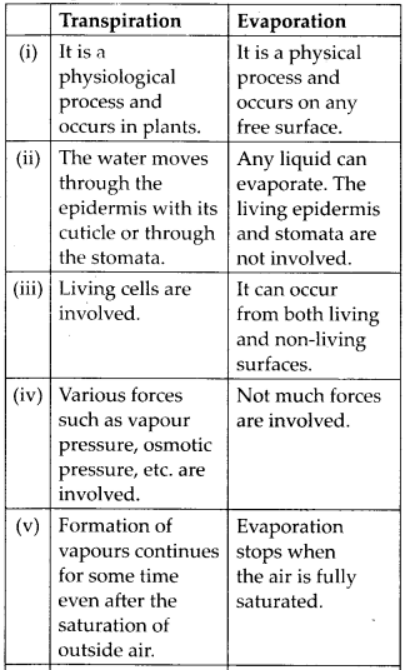 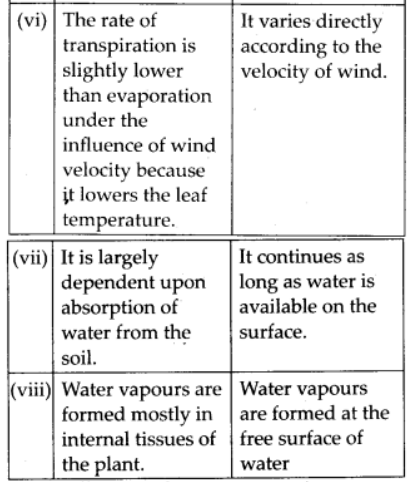 (c)Differences between osmotic pressure and osmotic potential are as follows: 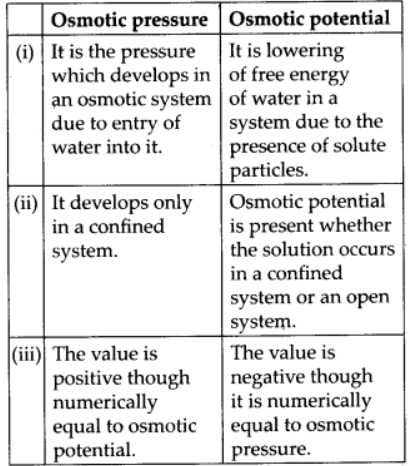 (d) Differences between imbibition and diffusion are as follows: 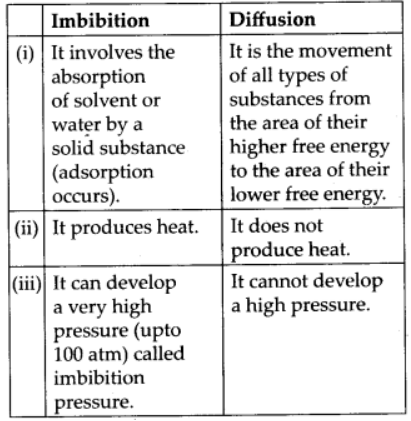 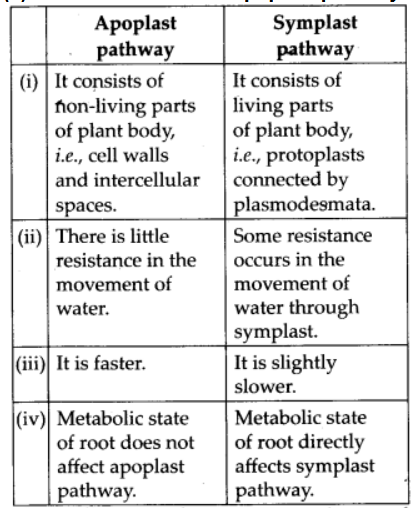 (f) Differences between guttation and transpiration are as follows: 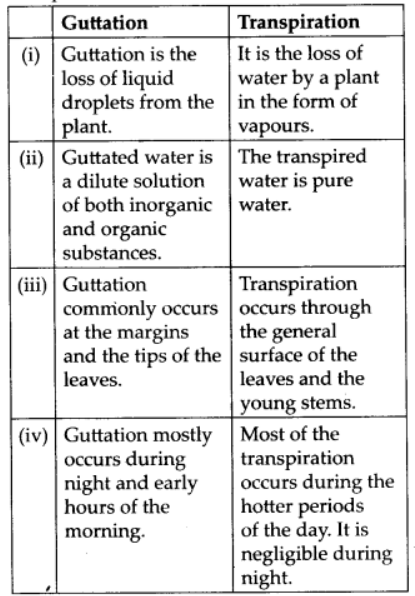 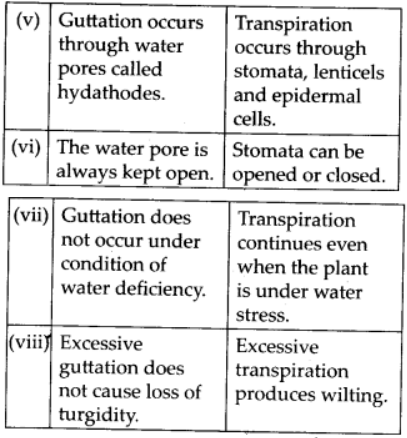