NCERT Solutions for Class 11 Biology, Chapter 5 Morphology. This NCERT solution contains questions, answers, and explanations for the complete chapter 5. Here on Physics Wallah, you can access to NCERT Solutions in free PDF for Biology for Class 11. The NCERT Solutions to the questions after every unit of NCERT textbooks designed at helping students solving difficult questions.

Answer. Roots of some plants change their shape and structure and become modified to perform certain functions other than absorption and conduction of water and minerals. It is called modification of roots. Roots are modified for support, storage of food and respiration, etc.
(a) Root modification in banyan tree : The banyan tree (Ficus benghalensis) has massive pillar-like adventitious roots arising from the aerial part of the stem. These roots grow towards the ground and provide support to the tree. Such roots are called prop roots.
(b) Root modification in turnip : The modification of root found in turnip is napiform for food storage. The upper portion of these fleshy roots is inflated or swollen which tapers towards the lower end.
(c) Root modification in mangrove trees : The roots of mangrove plants grow vertically upwards from the soil for the absorption of oxygen from the atmosphere as the soil is poorly aerated. These types of roots are called pneumatophores.

2.Justify the following statements on the basis of external features:
(i) Underground parts of a plant are not always roots.
(ii) Flower is a modified shoot.

Answer.(i) There are not always roots for underground plant because sometimes the stem also becomes underground and gets modified into various forms to complete several functions of storage, vegetative propagation, perennation, etc. Underground modifications of stems are tuber, rhizome, corm and bulb. The underground stems can be distinguished from roots externally by the presence of nodes and internodes, axillary buds, scale leaves etc. and by absence of root cap and root hairs.
(ii) During the flowering season, the apical meristem gives rise to the floral meristem. The axis of the stem gets condensed, while the internodes lie near each other. Instead of leaves, various floral appendages arise from the node. Therefore, it can be said that the flower is a modified shoot.

4.Explain with suitable examples the different types of phyllotaxy.

Answer. Phyllotaxy can be defined as the pattern of arrangement of leaves on the stem or branch. It is mainly of three types – alternate, opposite and whorled. In alternate type of phyllotaxy, a single leaf arises at each node in alternate manner, as in china rose, mustard and sunflower plants. In opposite type, a pair of leaves arises at each node and lie opposite to each other as in Calotropis and guava plants. If more than two leaves arise at a node and form a whorl it is called whorled phyllotaxy as in Alstonia.

Answer. (a) Aestivation : The mode of arrangement of accessory floral organs (sepals and petals) in relation to one another in floral bud is known as aestivation. The main type of aestivation are valvate, twisted, imbricate, and vexillary.
(b) Placentation : The arrangement of ovules within the ovary is known as placentation. It is primarily of five types, namely marginal, basal, parietal, axile, and free central.
(c) Actinomorphic : When flower can be divided into equal radial halves in any radial plane passing through the centre, it is said to be actinomorphic, e.g., mustard, Datura etc.
(d) Zygomorphic : When a flower can be divided into two similar halves by a single vertical plane, it is said to be zygomorphic, e.g., pea, gulmohar, bean, Cassia.
(e) Superior ovary : In hypogynous flower, the gynoecium occupies the highest position while the other parts are situated below it. The ovary in such flowers is said to be superior, e.g., mustard, brinjal.
(f) Perigynous flower: In perigynous flowers, the gynoecium is present in the centre and the rest of the floral parts are arranged at the rim of the thalamus at the same level. Examples include plum and rose.
(g) Epipetalous stamen : When stamens are attached to the petals, they are called epipetalous stamens e.g., brinjal.

6.Differentiate between
(a) Racemose and cymose inflorescence
(b) Fibrous root and adventitious root
(c) Apocarpous and syncarpous ovary

Answer.(a) Differences between racemose and cymose inflorescence are as follows:

(b) Differences between fibrous and adventitious roots are as follows :

7. Draw the labelled diagram of the following:
(i) Gram seed
(ii) V.S. of maize seed 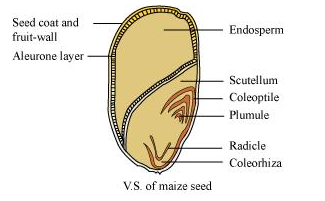 Answer. The modifications of Stem with suitable examples are:

→ Food Storage: Stems are modified to perform different functions. Underground stems of potato, ginger, turmeric, zaminkand, Colocasia are modified to store food in them. They also act as organs of perennation to tide over conditions unfavourable for growth.

Tendrils: Stem tendrils which develop from axillary buds, are slender and spirally coiled and help plants to climb such as in gourds (cucumber, pumpkins, watermelon) and grapevines.

→ Thorns: Axillary buds of stems may also get modified into woody, straight and pointed thorns. Thorns are found in many plants such as Citrus, Bougainvillea. They protect plants from browsing animals. Some plants of arid regions modify their stems into flattened (Opuntia), or fleshycylindrical (Euphorbia) structures. They contain chlorophyll and carry out photosynthesis.

→ Vegetative Reproduction: Underground stems of some plants such as grass and strawberry, etc., spread to new niches and when older parts die new plants are formed. In plants like mint and jasmine a slender lateral branch arises from the base of the main axis and after growing aerially for some time arch downwards to touch the ground. A lateral branch with short internodes and each node bearing a rosette of leaves and a tuft of roots is found in aquatic plants like Pistia and Eichhornia. In banana, pineapple and Chrysanthemum, the lateral branches originate from the basal and underground portion of the main stem, grow horizontally beneath the soil and then come out obliquely upward giving rise to leafy shoots.

9. Take one flower each of families Fabaceae and Solanaceae and write its semi-technical description. Also draw their floral diagrams after studying them.

Fabaceae (earlier called Papilionaceae) is a sub-family of the Leguminoseae family. 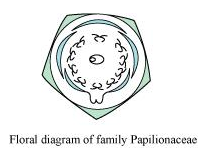 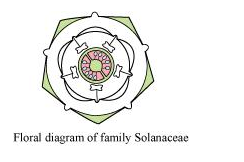 10. Describe the various types of placentations found in flowering plants.

Answer. Placentation: The arrangement of ovules within the ovary is known as placentation. The placentation are of different types namely, marginal, axile, parietal, basal, central and free central.

The various types of placentations found in flowering plants are:

→ Basal placentation: The ovary in which the placenta develops from its base and a single ovule is found attached to the base is said to have basal placentation. It is found in marigold and sunflower.

11. What is a flower? Describe the parts of a typical angiosperm flower?

Answer. The flower is the reproductive unit in the angiosperms. It is meant for sexual reproduction. A flower has four different parts i.e., the calyx, corolla, androecium, and gynoecium. Androecium and gynoecium represent the male and female reproductive organs of a flower respectively. Parts of flower are:

→ Corolla: Corolla is composed of petals. Petals are usually brightly coloured to attract insects for pollination. When the petals are free, they are called polypetalous, while fused petals are called gamopetalous. Corolla may be tubular, bell-shaped, funnel-shaped or wheel-shaped.

→ The androecium or the stamen is the male reproductive part of a flower. It consists of two parts, the filament and the bilobed anther. The bilobed anther is the site for meiosis and the generation of pollen grains.

→ Gynoecium represents the female reproductive part of a flower. It consists of an ovary. The ovary is connected by a long tube (called style) to the stigma. The ovary bears numerous ovules attached to the placenta.

12. How do the various leaf modifications help plants?

13. Define the term inflorescence. Explain the basis for the different types of inflorescence in flowering plants.

Answer. Inflorescence is the manner in which the flowers are arranged on the flowering axis. During the flowering season, the vegetative apex of the stem gets converted into a floral meristem. Depending on

whether the apex gets converted into a flower or continues to grow, two major types of inflorescences are defined – racemose and cymose.

as
Actinomorphic flowers are represented by the symbol

A bisexual flower is indicated by

15. Describe the arrangement of floral members in relation to their insertion on thalamus?