Modern Concepts of Acids and Bases

Acid Base And Salt of Class 10

Following are the important modern concept of acids and bases:

In this reaction, HCl acts as an acid because it donates a proton to the water molecule. Water, on the other hand, behaves as a base by accepting a proton. 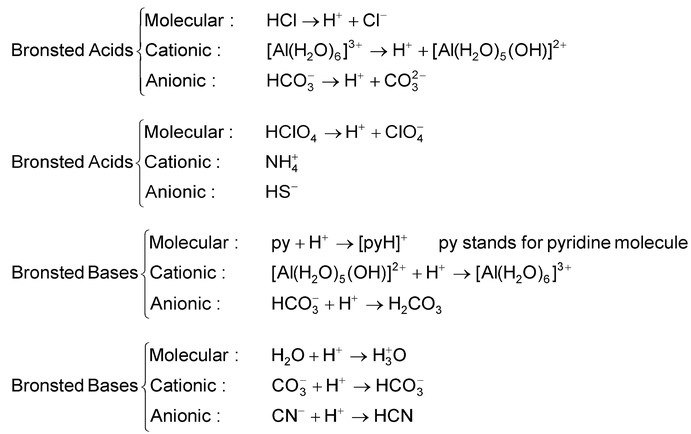 The members of which can be formed from each other mutually by the gain or loss of proton are called conjugate acid - base pairs.

If in the above reaction, the acid HCl is labelled Acid1 and its conjugate base viz. Cl– as Base1 and further, if H2O is designated Base2 and its conjugate acid viz. H3O+ as Acid 2, the equilibrium can be represented by a general equation.

Two important axioms of the Bronsted concept and position of equilibrium in acid-base reactions:

As a stronger acid, HCl is highly ionised even in concentrated aqueous solution. At equilibrium, the above reaction proceeds to the right, with most of HCl ionised to form H3O+ and Cl– ions. This fact can be illustrated by using arrows of unequal length to designate the forward and reverse reactions respectively. Thus.

The longer arrow indicates that the position of equilibrium lies to the right.

In the ionisation of CH3COOH in H2O, equilibrium is reached when the reaction has proceeded to the right only to slight extent, with only a small fraction of the CH3COOH present in the form of ions.

Here the longer arrow indicates that the position of equilibrium lies to the left.

Relative Strengths of Acids and Bases

According to Bronsted concept, a stronger acid has a stronger tendency to donate a proton and a strong base has a strong tendency to accept a proton. At least two general methods are generally used for the comparison of relative acidity of given acids.

CH3COOH is, therefore, a stronger acid than HCN and CN– ion is a stronger base than CH3COO– ion.

Ethoxide ion, C2H5O– is, therefore, a stronger base than OH– and H2O is a stronger acid than C2H5OH. Similarly when HS– is added to NH3, it has been found experimentally that NH4+ and S2– ions are present in the reaction mixture. This shows that NH3 is a stronger base in comparison to HS–.

(i) FeCl3 and AICI3 are Lewis acids, because the central atoms have only six electrons after sharing and need two more electrons.

(ii) NH3 is a Lewis base as it has a pair of electrons which can be easily donated.

Characteristics of species which can act as Lewis acids:

(A)Molecules in which the central atom has incomplete octet: Lewis acids are electron deficient molecules such as BF3, AICl3, GaCl3 etc.

Molecules in which the central atom has empty d-orbitals : The central atom of the halides such as TiCI4, SnCl4, PCI3, PF5, SF4, TeCl4. etc., have vacant d-orbitals. These can, therefore, accept an electron pair and act as Lewis acids.

(C) Simple cations : All cations are expected to act as Lewis acid, since they are electron deficient in nature.

(D) Molecules having a multiple bond between atoms of dissimilar electronegativity : Typical examples of molecules belonging to this class of Lewis acids are CO2, SO2 and SO3.

Characteristics of species which can act as Lewis bases :

(C)Multiple bonded compounds : The compounds such as CO, NO, ethylene, acetylene etc. can act as Lewis bases.