Production of offsprings by a single parent without the formation and fusion of gametes is called as asexual reproduction. It is more primitive type of reproduction. It ensures rapid increase in number. 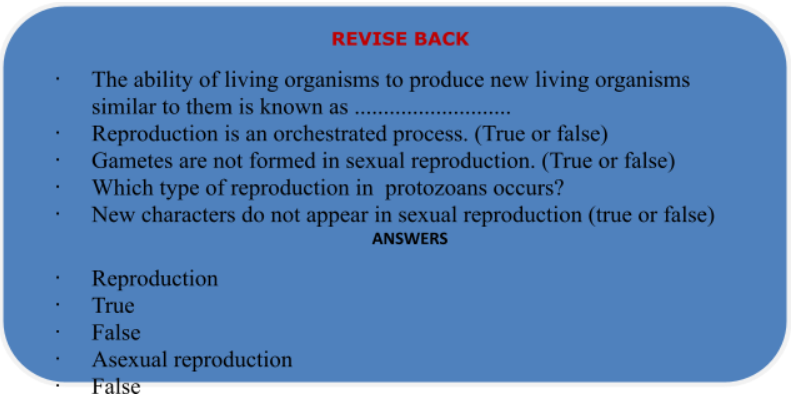 It is the simplest form of reproduction in which unicellular organism either divides into two or many organisms.

It is also divided into two types:

Budding is also of two types:

Exogenous budding: [External budding] In this, bud arises from the surface of parent body. e.g., Hydra.

Budding in Hydra: A bulge appears on the body as a result of repeated mitotic division in the cells resulting in the formation of lateral out-growth called bud. This bud enlarges in size by further division of cells and attains the shape of parent. It then separates from the parent body and starts behaving as new Hydra. 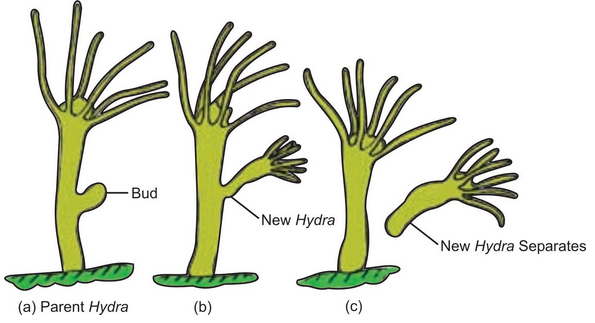 Endogenous budding: [Internal budding] In this, bud arises inside or within the parent body. e.g., Sponges.

Budding in yeast: A small bud like out-growth appears at one end of the parent cell which gradually enlarges in size. The nucleus also enlarges and divides into two daughter nuclei. One nucleus remains in the parent cell and other goes to the daughter. When the bud attains almost similar size like parent, a constriction appears at the base of the bud separating it from the parent. However, sometimes a chain of buds can also be seen. 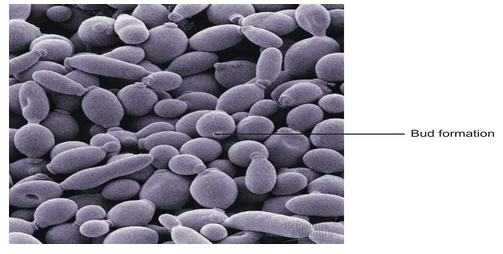 Fragmentation: It is a type of reproduction or the regeneration ability of the organism to replace their lost part. In this process an entire new organism can grow from certain pieces or of the parent organisms. e.g. Flatworm. 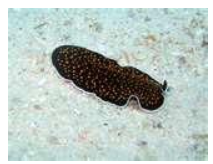 Answer : Fungi reproduce asexually by means of sporulation and fragmentation.

This is a type of asexual reproduction in fungi which is similar to the vegetative reproduction in some plants. In this process, a detached fragment of the fungal hyphae gives rise to a new individual under suitable conditions.

In fungi, other than yeasts, the most common type of asexual reproduction is sporulation. The process of formation of spores is called sporulation. . The spores formed in sporangia are called sporangiospores which are formed by several mitotic divisions. Asporangiospores germinate to develop into an organism with many vegetative hyphae.eg: mucor

In this process the fungal hyphae differentiate into structures like sporangia, conidiophoresetc., which will give rise spores or condidia by mitotic division. eg: Asperigillus

A spore is a single or several-celled reproductive structure that detaches from the parent and gives rise, directly or indirectly to a new individual.

Spore formation takes place mostly in bacteria and fungi. In fungi e.g. Rhizopus, Mucor, Aspergillus, Penicillium etc., spores are formed in a sac-like structure called sporangium at the tips of fungal hyphae. The nucleus divides inside the sporangium and gets surrounded by a small mass of cytoplasm forming a spore. After attaining maturity, the sporangial wall ruptures releasing the spores. The spores are covered with thick walls that protect them until they come in contact with another moist surface and can begin to grow. 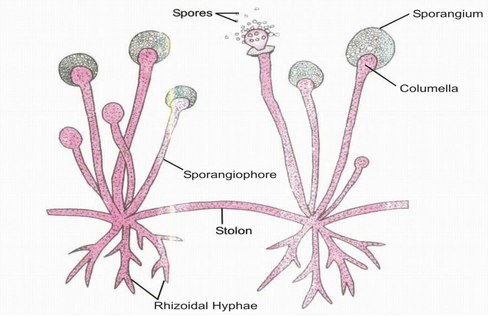 Formation of sporangia and spores in a fungus (Rhizopus)

Regeneration is defined as a natural ability of some simple multicellular organisms to replace worn out parts, to repair damaged parts or to regrow cast off organs. It takes place mostly in Hydra, Planaria, sponges, etc. If sometimes the individual is somehow cut or broken into many pieces, many of these pieces grow into separate individuals. But regeneration is not same as reproduction since most organisms would not normally depend on being cut up to be able to reproduce.

Regeneration is performed by specialised cells. These specialised cells proliferate and make large number of cells. Different cells from the mass of cells undergo change to become various cell types and tissues. These changes takes place in an organized sequence referred to as development. Complex multicellular organisms cannot give rise to new individuals by regeneration. This is because they have complex body organization.

Natural method: There are many plants which propagate naturally. Some plants propagate by roots e.g. sweet potato, guava, etc.; some by stems like ginger, banana, potato, strawberry; etc.; some by leaves like Bryophyllum, Begonia, etc.

Artificial method: There are some plants which propagates artificially by following methods :

Cutting: This is the very common method of vegetative propagation practised by the gardeners all over the world. It is the process in which a vegetative portion from plant is taken and is rooted in the soil to form a new plant. e.g. Grapes, Sugarcane etc.

Layering: In this process the development of adventitious roots is induced on a stem before it gets detached from parent plant, e.g., Mango, roses etc

It is of three types:

Mound layering: In the process of layering the lower stem branch of plant is used. Leaves are removed from this stem. Then it is bent close to the ground, pegged and covered with the moist soil in such a way that it's growing tip remains above the soil surface. This pegged down branch is called as layer. After a few days the covered portion of stem develops roots. This stem is then detached from the parent plant and is grown separately into a new individual. e.g. Jasmine 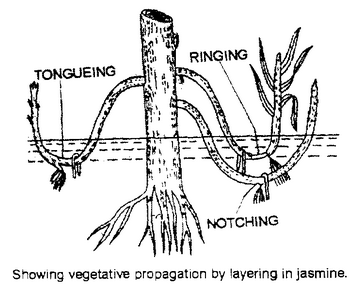 Air layering: It is adopted in those plants where stem cannot be bent to the ground. In this process the stem is girdled (i.e. ring of the bark is removed). Then it is covered with moist moss or cotton and wrapped with a polythene sheet to preserve the moisture. After few weeks adventitious roots develop from the injured part. The branch along with roots is then separated from the parent plant and planted to grow into a new plant. e.g. Orange, Pomegranate etc. 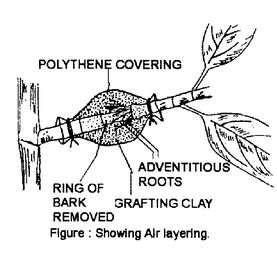 Grafting: The process of joining together of two different plants in such a manner that they live as one plants is called as grafting. Out of the two plants one is rooted in the soil and is known as the stock. The other part consists of a small shoot bearing one or more buds it is known as scion. Their union is carried out in such a way that their cambium must overlap each other. e.g. Mango, roses etc.

There are four methods of grafting. They are

Tongue grafting : This method is used on stocks that are relatinely small.

1. A 'T' shaped incision is made on the bark of the stock.

2. A bark is removed on either side of vertical cut.

3. A single bud scion with a little wood is placed in the incision of below the bark and held in position applying tape.

2. For Example in ornamental plants with attractive flowers and leaves or any other interest ingvariatiion in one plant can be continued in next generation through vegetative propagation.

3. Such plants can be produced in large numbers in a short time.

5. This root stock can be selected from a plant that is immune to diseases.

6. In this method it would be possible to develop new varieties with useful characters.

7. It can be used to grow other varieties by means of grafting.

8. Vegetative propagation is a very useful method of reproduction in plants that rarely pro duce flowers.

Micro propagation: It has now become possible due to recent techniques to produce a large number of plantlets from a small piece of tissue taken from the shoot tip or other suitable plant parts. This method of propagation is called as micro-propagation. It involves the process of tissue culture. e.g., Orchids. ornamental plants etc.

(A) It is used to propagate a plant in which viable seeds are not formed or very few seeds are produced. e.g. Orange, pineapple, banana etc.

(B) Vegetative propagation helps us to introduce plants in new areas where the seed germination fails to produce mature plant due to change in environmental factors and the soil.

(C) Vegetative propagation is a more rapid, easier and cheaper method of multiplication of plants.

(D) By this method a good quality of a race or variety can be preserved.

(E) Most of the ornamental plants are propagated through vegetative propagation. e.g. Rose, Tulip etc.

The significance of asexual reproduction is that it is a means for a rapid and significant increase in the numbers of individuals. (Weeds, for instance, are successful partly because of their great capacity for vegetative reproduction.) The cells that result from asexual reproduction are genetically identical to their parent cells. In addition, vegetative reproduction in the bryophytes and pteridophytes is a means of bypassing the somewhat lengthy and moisture-dependent sexual process; that is, the motile swimming sperm characteristic of these groups require the presence of water, which may be a limiting factor in drier times. 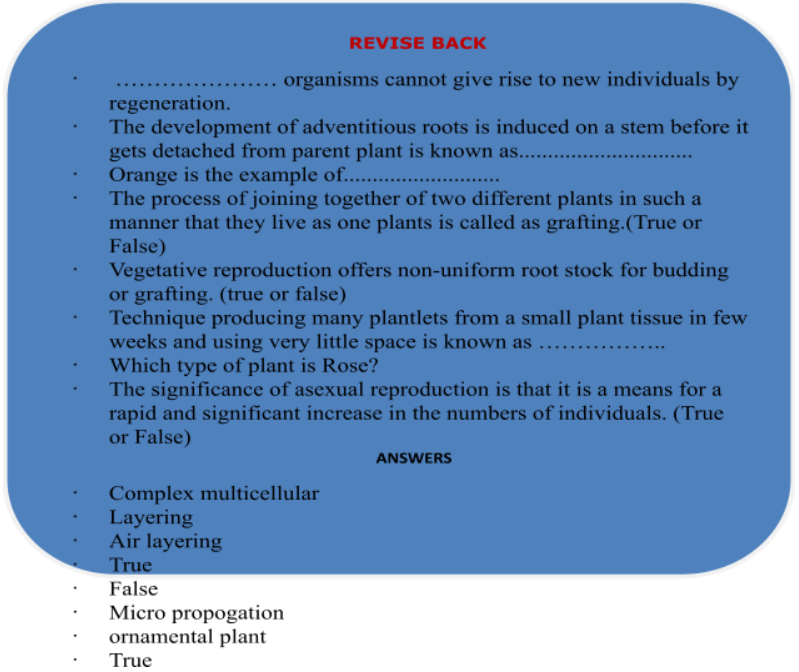