Secondary sexual characteristics in males include deepening of voice, widening of shoulders, appearance of beard and moustaches, growth of axillary and pubic hair, enlargement of external genital organs and formation of sperms.

Secondary sexual characteristics in females include growth of axillary and pubic hair, widening of pelvis and hip, enlargement of breasts and initiation of the menstrual cycle.

The male reproductive system consists of the two following organs – a pair of testes, a pair of epididymis, a pair of vasa deferentia, urethra, penis and accessary glands. 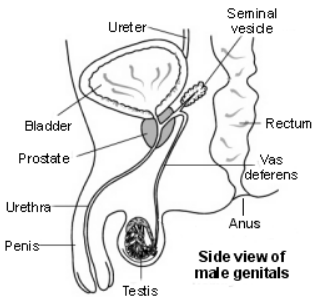 Testes are one pair of small sized oval shaped 4 to 5 cm long, pinkish coloured primary sex organ of male.These are present in a thin pouch made up of skin and connective tissue called scrotal sac or scrotum hanging from lower abdominal wall between the leg.Scrotal sac acts as thermoregulator and it keep the testicular temperature 2°C lower than body temperature. This temperature is suitable for development of sperms. Each testis is externally covered by a white fibrous capsule, the tunica albuginea which is produced inside the testis as fibrous septa. The septa divide the testis into a number of testicular lobes.Each lobule has one to three convoluted seminiferous tubules.The combined length of all seminiferous tubules is about 200–400 metres. Between the seminiferous tubules connective tissue are found.In this connective tissue interstitial cells also called Leydig cells are present as clumps.These cells secrete the male sex hormone, testosterone. This hormone regulates the maintenance of primary and secondary sexual charateristics in males.

It arises from the urinary bladder and joins the ejaculatory duct to form urinogenital canal as it carries urine, sperm and secretion of seminal vesicles postrate and cowper’s gland.

Urethra is 20 cm long, passes through the penis and it is differentiated into prostatic part (2.5 cm) membranous part (2.5 cm) and penile part (15.0 cm). Finally it opens at tip of penis.

In male it is the common pathway for release of urine and seminal fluid.

Penis: It is a long and thick muscular organ made up of mostly erectile tissue. It opens outside the body. It passes the sperms from the man’s body into the vagina of the women’s body during mating. 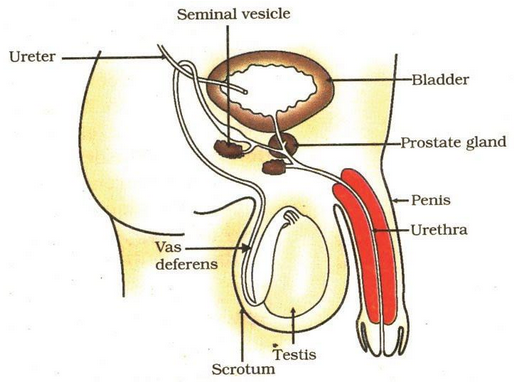 (ii) Prostate gland: This gland surrounds the first portion of urethra. It secretes a fluid containing citrate and enzymes that nourish and activates the spermatozoa that swim. 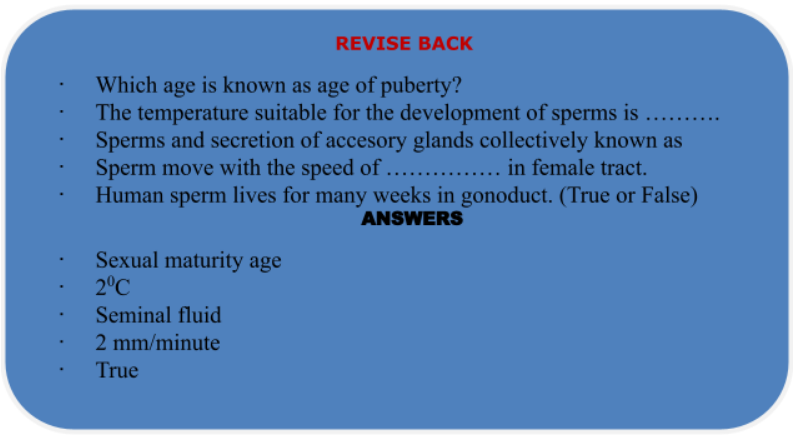