The human eye is one of the most valuable and sensitive sense organs, which enable us to see the colourful world around us. It is just like a photographic camera. The lens system of the eye forms an image of the object on a light sensitive screen. 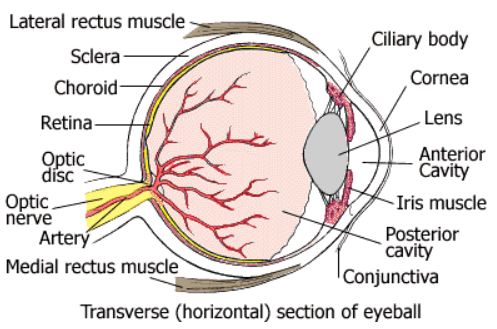 STRUCTURE AND WORKING OF HUMAN EYE:

The human eye has the following parts :

WORKING OF THE HUMAN EYE

Light rays coming from the object to be seen can enter the eye through pupil and fall on the eye lens. The eye lens being convex, forms a real and inverted image on the retina. The light sensitive cell of the retina gets activated upon illumination and generate electric signals. These signals are sent to the brain via the optic nerve. The brain interprets these signals and finally gives rise to the sensation of vision. 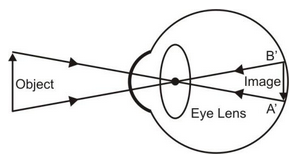 THE FUNCTION OF IRIS AND PUPIL

The image of the objects at different distances from the eye are brought to focus on the retina by changing the focal length of the eye-lens, which is composed of fibrous jelly-like material, can be modified to some extent by the ciliary muscles.

Near Point and Far Point:

The nearest point at which a small object can be seen distinctly by the eye is called the near point. For a normal eye, it is about 25 cm and is denoted by the symbol D.

With advancing age, the power of accommodation of the eye decreases at the eye lens gradually loses its flexibility. For most of the old persons aged nearly 60 years, the near point is about 200 cm and corrective glasses are needed to see the nearby objects clearly.

The farthest point upto which our eye can seen objects clearly, without any strain on the eye is called the far point. For a person with normal vision, the far point is at infinity.

The minimum distance of an object from the eye at which it can be seen most clearly and distinctly without any strain on the eye, is called the least distance of distance of distinct vision. For a person with normal vision, it is about 25 cm and is represented by the symbol D, i.e.

Let a sequence of still pictures is taken by a move camera. If the sequence of these still pictures is projected on a screen at a rate of 24 images or more per second then the successive impression of the images on the screen appear to blend or merge smoothly into one another. This is because an image (or a scene) on the screen appears just before the impression of previous image on the retina is lost. Hence, the sequence of images blend into one another giving the impression of a moving picture. This principle is used in motion picture projection or in cinematography

Due to genetic disorder, some persons do not possess some cone-shaped cells that responds to certain specific colours only. Such persons cannot distinguish between certain colour but can seen well otherwise. Such persons are said to have colour-blindness. Driving licenses are generally not issued to persons having colour-blindness.

Different animals have different colour perception due to which different structure of rod shaped cells and core shaped cells. For example, bees have some cone-shaped cells that are sensitive to ultraviolet. Therefore bees can seen objects in ultraviolet light and can perceive colours which we cannot do.

Sometimes due to the formation of a membrane over the crystalline lens of some people in the old age, the eye lens becomes hazy or even opaque. This is called cataract. It results in decrease or loss in vision of the eye. Cataract can be corrected by surgery leading to normal vision.