For example: The air just above the fire becomes hotter than the air farther up. The hotter air is lighter (rarer medium) than the cooler air (denser medium) above it, and has a refractive index slightly less than that of cooler air. Since the physical conditions of the air are not stationary, therefore when we see the objects through hot and cold air layers then refraction of light takes place due to which the position of the objects fluctuates and the object appears shaking.

Some of the optical phenomena in nature which take place due to the atmospheric refraction of light are as follows:

The twinkling of stars is due to the atmospheric refraction of star’s light. Since stars are very far off heavenly bodies and therefore are considered single point sources of light.

When the light coming from a star enters the earth’s atmosphere, it undergoes refraction due to the varying optical densities of layers of air. The continuous changing conditions of the atmosphere, refract the light coming from the stars by different amounts from one moment to another. When the atmosphere refracts more star light towards us, the stars appear to be bright and when the atmosphere refracts less star light towards us, the star appears to be dim. This phenomenon goes on thereby giving rise to twinkling of stars.

PLANETS DO NOT TWINKLE:

As a result, the total variation in the amount of light entering our eye from all the point sources of light will average out to be zero. Thereby, nullifying the twinkling effect. Hence planets do not twinkle.

THE APPARENT POSITION OF THE STARS IS HIGHER THAN THEIR ACTUAL POSITION:

The apparent position of the stars is higher than their actual position due to the atmospheric refraction. The upper layers of the atmosphere act like a rarer medium whereas the lower layers which are close to the earth acts like a denser medium. As the star light enters from rarer to denser medium it bends more towards the normal. Since the atmosphere bends starlight towards the normal, the apparent position of the star is slightly different from its actual position, as a result, star appears slightly higher than its actual position, as shown in the figure.

It is again due to the atmospheric refraction that we can see the sun for about two minutes even after the sun has set below the horizon. Because of this atmospheric phenomenon, the time from sunrise to sunset is lengthened by about 2 + 2 = 4 minutes. 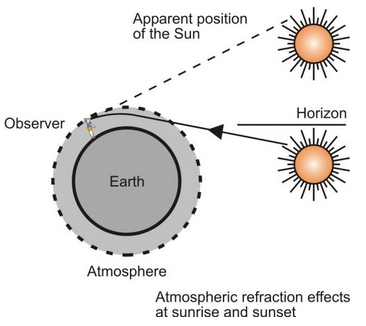 When light falls on tiny particles then diffused reflection takes place and light spreads in all possible direction. This phenomenon is known as scattering of light.

Small particles scatter mainly blue light. When size of the particle increases then the light of longer wavelength also scatter. The path of a beam of light passing through a true solution is not visible. However, its path becomes visible through a colloidal solution where is size of the particles is relatively larger. Rayleigh proved that the intensity of scattered light is inversely proportional to the fourth power of the wavelength, provide the scatters is smaller in size than the wave length o light :

The earth’s atmosphere is a heterogeneous mixture of minute particles. These particles include smoke, tiny water droplets, suspended particles of dust and molecules of air. When a beam of light strikes such fine particles, the path of the beam become visible. The light reaches us after being reflected diffusely by these particles. The phenomenon of scattering of light by the colloidal particle gives rise to tyndall effect. This phenomenon is seen when a fine beam of sunlight enters a smoke filled room through a small hole. Thus, scattering or light makes the particles visible. Tyndall effect can also be observed when sunlight passes through a canopy of a dense forest. Here, tiny water droplets in the mist scatter light.]

PHENOMENA BASED UPON SCATTERING OF LIGHT:

(i) Colour of the clear sky is blue:

The molecules of air and other fine particles in the atmosphere have size smaller than the wavelength of visible light. These are more effective is scattering light of shorted wavelength at the blue end then light of longer wavelength at the red end. The red light has a wavelength about 1.8 times greater then blue light. Thus, when sunlight passes through the atmosphere, the fine particles in air scatter the blue colour more strongly than red. The scattered blue light enters our eyes. If the earth had no atmosphere, there would not have been any scattering. Then, the sky would have looked dark. The sky appears dark to passenger flying at very high attitudes, as scattering is not prominent at such heights.

(ii) Colours of the sun at sunrise and sunset :

Let us do an activity to understand the colour of sun at sunrise and sunset. Place a strong source (s) of white light at the focus of converging lens (L1). This lens provides a parallel beam of light. Allow the light beam to pass through a transparent glass tank (T) containing clear water. Allow the beam of light to pass through a circular hole (c) made in a cardboard. Obtain a sharp image of the circular hole of a screen (MN) using a second converging lens (L2). Dissolve 200 g of sodium thiosulphate in 2 L of clear water taken in the tank. Add 1 to 2 mL of concentrated sulphuric acid to the water.

It is due to scattering of short wavelengths by minute colloidal sulphur particles. We observe that the colour of the transmitted light from the fourth side of glass tank facing the circular tank at first is orange red colour and then bright crimson red colour of the screen. Light from the sun travels relatively short distance. At moon, the sun appears white as a little of blue and violet colours are scattered. Near the horizon, most of the blue light shorter wavelength are scattered away by the particles. Therefore, the light that reaches our eye is of longer wavelength. This gives rise to the reddish appearance of the sun.

Out of all the colours of visible light, red colour has the longest wavelength. Therefore red colour is least scattered. As a result, it can be seen from maximum distance. That is why danger signals are red.