Structure of sperm has three parts :

It is flat and oval in human sperm. It is composed of a large posterior nucleus and a small anterior acrosome.

Acrosome: Acrosome is formed from the golgi complex. It contains digestive enzyme “sperm lysin”. It is the caplike covering above the nucleus. It is surrounded by double membrane. Acrosome + its membrane are together called  Galea-capitis. Acrosome plays important role in penetration of ovum by sperm.

Remaining part of the head is nucleus. Narrow space between the nucleus and the acrosome is termed as “perforatorium”.

Nucleus of the sperm is very small. In it nucleoplasm and nucleolus are absent. It contains only chromatin.

At the base of the nucleus in a pit like depression proximal centriole is present.

In between the head and the middle piece a small neck is present. In this neck part a distal centriole is located. Both the centrioles are at right angles to each other.

Distal centriole gives rise to the axial filament of the sperm. It has (9+2) microtubule arrangement.

This is known as the energy-chamber of the sperm. Many mitochondria spirally surround the axonema, this is called “Nebenkern sheath”. This part provides energy to the sperm for locomotion.

In middle-part, axonema is surrounded by 9 solid fibres made up of proteins. 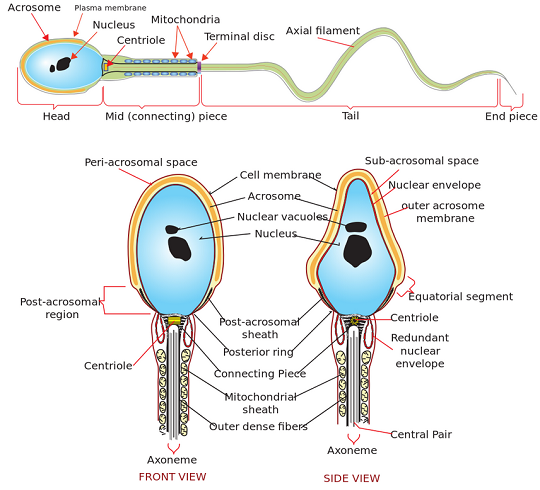 At the posterior end of the middle-piece a Ring centriole is found.

Its function is not known.

The longest and the fibrous part of the sperm is termed its tail. Sperm moves with the help of its tail.

Basal granule of the tail is Distal centriole. Tail has 2 parts

Main part : This part is broad. It contains cytoplasm and is surrounded by 2 solid fibres.

End piece : This part is narrow in it cytoplasm is absent only axonema is present. In it solid fibres are also absent. In the sperm of certain animals, tail is absent. e.g.