The heart of the rat consists of four chambers. There is a right ventricle, and a left ventricle, which are not easy to distinguish externally. Right atrium and left atrium are dark ear-shaped structures on each side of the anterior portion of the heart. 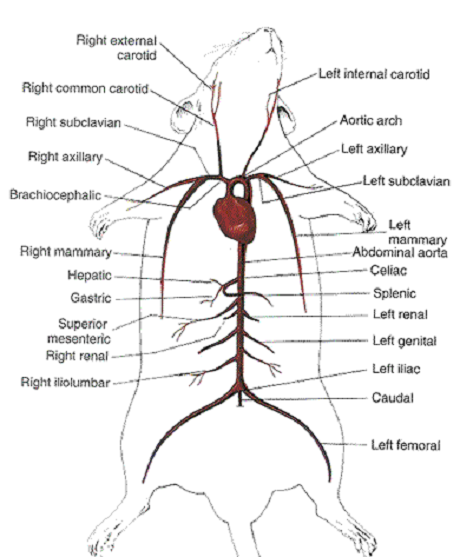 The arterial system in rat shows the following main arteries and their branches :

A. A pulmonary aorta arises from the right ventricle and divides into right left pulmonary arteries that supply blood to the lungs.

B. An aortic arch arises from the left ventricle and supplies blood to all the parts of the body. It divides into three main branches :

1. Innominate artery : It arises from the aorta on the right side and divides into two arteries.

(a) Right common carotid : It runs upwards on the side of trachea and divides into external and internal carotids that supply blood to the right side of head and face.

(b) Right subclavian : It further divides into following arteries :

(i) Right cervical supplies blood to the muscles of neck.

2. Left common carotid : It arises directly from aortic arch and runs upwards along the side of trachea. It divides into external and internal carotids that supply blood to the left side of head and face.

3. Left subclavian : It also arises from the aortic and divides in the same way as right subclavian branch of innominate.

The aortic arch curves down as dorsal aorta and gives the following arteries :

(a) Hepatic artery supplying blood to the liver.

(b) Gastric artery supplying blood to the stomach.

3. Anterior mesenteric artery : supplies blood to various parts of intestine and forms a network of vessels.

5. Gonadial arteries : A pair of arteries supplies blood to ovaries and uterus (in females); and to testis and epididymis (in males).

6. Ilio-lumbar arteries : A pair of these arteries supply blood to the wall of the abdominal cavity.

9. Caudal artery : The dorsal aorta continues into all tail region as caudal artery.

Venous system in rat cosists of the following veins : 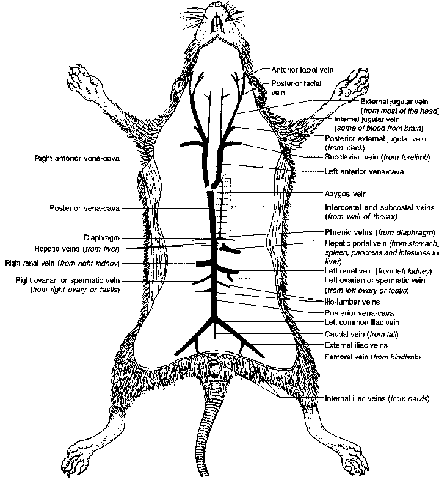 1. A pair of pulmonary veins collect oxygenated blood from lungs and open into left atrium.

2. A pair of precavals or anterior vena cava collect the deoxygenated blood from the anterior region of the body and open into the right atrium. Each precaval is formed by the union of following veins :

(f) Azygous vein : present only to the left side, so it opens into left precaval. It collects blood from the region of vertebral column.

1. A postcaval vein collects blood from the posterior region of the body and is formed by the union of following veins:

(a) Caudal vein : Collects blood from tail region and opens into postcaval where iliac veins join it.

(b) Iliac veins : Each iliac vein is formed by the union of :

(i) Femoral vein - collects blood from the outer side of leg.

(ii) Sciatic vein - collects blood from the inner side of leg.

(d) Ilio-lumbar veins : A pair of them collect blood from the lumbar region of the body.

(f) Renal veins : pair of them collect blood from kidneys.

(g) Hepatic veins : pair of them collect blood from the liver.

2. A hepatic portal vein collects blood from various parts of alimentary canal and opens into liver (instead of heart). It is formed by the union of following veins:

Note : There is no renal portal system in rats.