Digestive and Respiratory System of Frog 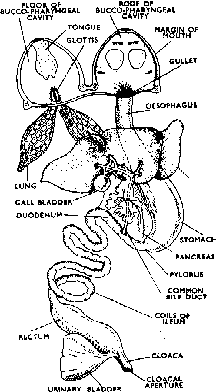 Fig. The digestive System of Frog

Cutaneous respiration (35% of respiration) is through the body surface. During hibernation and aestivation, frog respires only through this method.

Buccopharyngeal respiration occurs through the lining of buccal cavity. It occurs only when frog is out of water (0.9% of total respiration). The mucus membrane of the buccal cavity is moist which dissolves oxygen and diffuses it into the blood capillaries.

Lungs in frog are not efficient respiratory organs because only mixed blood enters into them and mainly function as hydrostatic organs. Lungs are a pair of thin walled, translucent with inner surface divided into alveoli by septa.

Respiratory movements in pulmonary respiration are because of buccopharyngeal cavity which acts as a force pump. These movements are carried out by set of paired muscles – sternohyal and pterohyal muscles.

Sternohyal muscles are attached with hyoid and coracoid, clavicles of the pectoral girdle and on contraction depresses the buccal floor enlarging the buccopharyngeal cavity.

Pterohyals are attached in between hyoid and pro-optics of the skull and on contraction lifts the floor of buccal cavity. With the depression of buccal floor, air enters buccal cavity through the nares.

External nares are then closed by pushing tuberculum prelinguale and the movable premaxillae. It is followed by raising of the buccal floor by pterohyal muscles which reduces the volume and the air is pushed into the lungs where exchange of gases takes place.

Buccal floor is again lowered enlarging its volume which draws air into the buccal cavity.

External nares are opened followed by raising the buccal floor, pushing the air out through external nares.

Sound producing organ of frog is laryngo-tracheal chamber. It is supported by one cricoid, two arytenoids and two prearytenoids. It has a pair of muscle strands vocal cords which actually produce sound. Male frog has vocal sacs which act as resonating chambers.