From the sub-oesophageal ganglion, a double ventral nerve cord passes backwards into the thorax which bears three ganglia in the thorax and six in the abdomen. 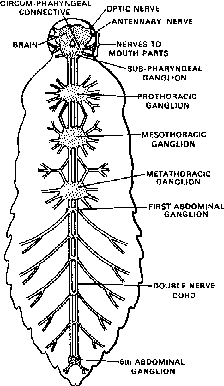 (ii) Peripheral Nervous System : Consists of nerves, which are given off from the ganglia so as to innervate all parts of the body.

(iii) Sympathetic or Stomato-gastric Visceral Nervous System: Consists of a frontal ganglion, which is situated on the dorsal side of the oesophagus in the head. From this ganglion, a median unpaired recurrent nerve reaches the visceral ganglion situated on the crop. Various nerve branches are given off from the visceral ganglion. The frontal ganglion is joined with the central nervous system by nerves, which connect the circumoesophageal commissures.

Each eye consists of about 2000 hexagonal facets or ommatidia, which are covered externally with transparent cuticle called the cornea. A single ommatidium consists of

(i) Corneal lines or facets formed by the transparent cuticle.

(ii) A pair of corneagen cells which form the corneal lens. 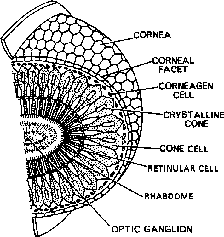 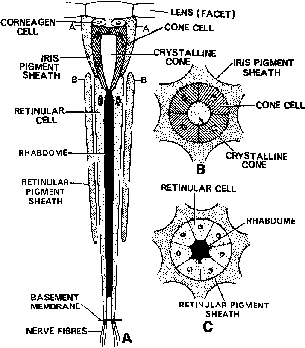 Some glands and ganglia secrete hormones. Endocrine system consists of:

4. A gland closely associated with brain secretes brain hormone or prothoracicotropic hormone (PITCH). This hormone performs two functions. They are:

(i) Stimulation of metabolism of prothoracic gland.