A large sac of skin, muscle and connective tissue called scrotum contains the testes on the exterior of the body just ventral to the anus.

Sperms produced in the seminiferous tubules of the testes pass into the caput epididymis via the vas efferentia (very small tubules which are not visible). The sperm moves through the corpus and cauda epididymes into the vas deferens, which is a moderately large tube leading from the epididymis to the urethra. The prostate gland is found on either side of the urethra region of the urinary bladder. Locate the large-lobed vesicular glands, and the coagulating glands which are closely applied to the inner curve of the vesicular glands. 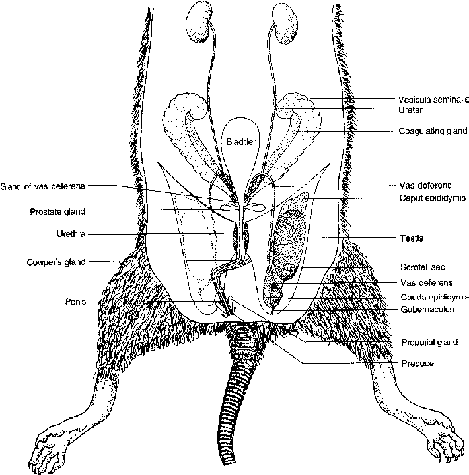 The above glands and some other glands in this region comprise the accessory sex glands. The secretions of these glands form the seminal fluid, which carries the sperm during ejaculation, activates and provides certain nutrients for them, and contains substances which neutralize the slight acidic environment of the vagina.

Ovaries appear as a mass of follicles just posterior to the kidneys. The adult non-pregnant rat is usually in breeding condition with mature or well developed ova in the ovaries.

The oviducts are small highly coiled tubes leading from the ovaries to the uterus. The cornua of the uterus unite to form the vagina.

The clitoris, which is the female homologue of the male penis, is associated with the urethra and therefore is not connected with the vagina in the rat.

When a follicle is ripe and its ovum is mature, it bursts, releasing the ovum which is then picked up by the oviduct. The oviduct is ciliated internally. The cilia beat to create currents to draw the ovum inside and propel it towards the uterus.

The rats are prolific breeders and have a short gestation period of 3-4 weeks and produce 5-6 litters a year. Each litter has 5-8 young ones. 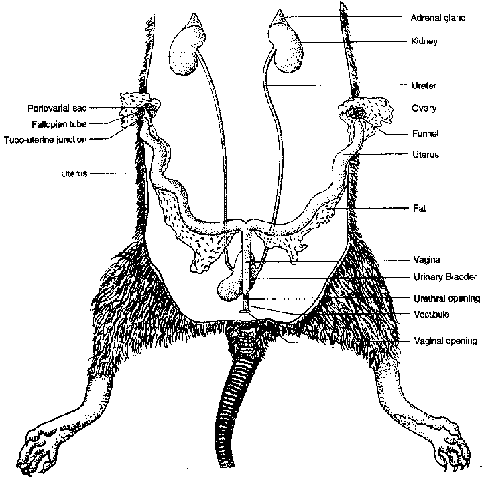 These are viviparous i.e. give rise to young ones, which are blind and naked at the time of birth. They become sexually mature in 8 - 11 weeks.