Nutrition in Plants of Class 7

Plants are autotrophic in nature. They prepare their own food hence they are called as producers. They contain a green pigment called chlorophyll which can entrap solar energy which is then converted into chemical energy in the form of food and the process is called as “Photosynthesis”.

The synthesis of organic compounds like glucose from simple inorganic molecules like CO2 and H2O by the cells of green plants having chlorophyll in the presence of sunlight is called as photosynthesis.

Photosynthesis is a two step process.

(A) Light reaction: ATP, NADPH2 and O2 are produced.

(B) Dark reaction: CO2& H2O are converted into glucose.

These are the green pigments present in chloroplast. They are found in green leaves in the maximum amount as well as in other green aerial parts of plant. There are six different types of chlorophylls: chl a, b, c, d, e and bacteriochlorophyll. Amongst them chlorophyll a and chlorophyll b are the most commonly occurring chlorophylls.

Besides chlorophyll certain other pigments are also present in plants like:

They help in exchange of gases and water. Stomatal opening is guarded by the presence of guard cells (kidney shaped). Aquatic plants obtain CO2 dissolved in water through their general body surface so they perform more photosynthesis than terrestrial plants.

(ii) Water: Plants absorb water from the soil by the process of osmosis. This water is transported to leaves by a special type of tissue called as xylem.

Site of photosynthesis is different in prokaryotes and eukaryotes.

It is a lamellar system consisting of stacks of granum lamella each bounded by a membranous box called as thylakoid. They are 40 – 60 per cell. Number of thylakoids per grana is 50 or more. Chlorophyll molecules are found inside the thylakoid membrane where they trap solar energy in the form of small energy packets called `photons’ or’ quanta’. Grana are interconnected to each other by a channel called as stroma lamellae or Fret’s channel.

It is a non pigmentedproteinaceous matrix in which grana remain embedded. It contains enzymes for dark reaction.

Regulated by: The process is regulated by chlorophyll molecules. ° It consists of 3 steps:

(B) Photolysis: It is also called as photo oxidation of water; this takes place in presence of Mn+2 and CI- ions 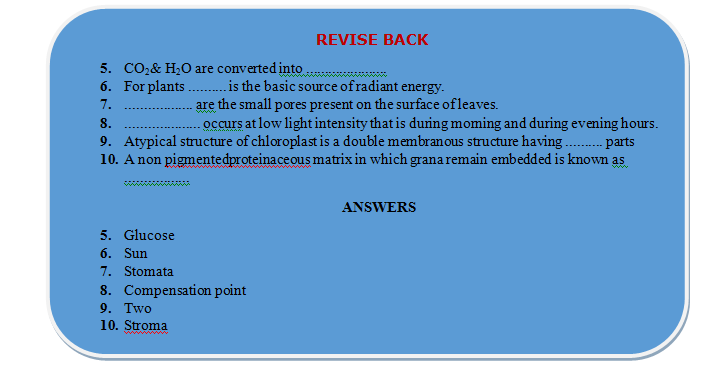