They grow on extremely wet soil where water is available to plants in abundance. The aquatic environment remains uniform, the hydrophytes, particularly the submerged and floating forms have less adaptations are chiefly in response to excess water, decreased oxygen supply and low temperatures.

On morpho ecological basis hydrophytes have been divided into five groups :

They remain in contact with water and air, but not soil. They float freely on the water surface. Leaves in some are very minute, while in other quite large. Some of the free floating hydrophytes are Wolffia, Lemna, Spirodella, Azolla, Eichhornia, Salvinia and Pistia.

Their roots are fixed in mud, but leaves have long petioles which keep them floating on the water surface. The remaining plant, except leaves, remains in water. Some of the rooted hydrophytes with floating leaves are Trapa, Nélumbo, Nymphaea and Marsilea, Victoria, Nymphoides.

These are also called suspended Hydrophytes. These are the plants in contact with only water, being completely submerged and not rooted in the mud. Their stems are long and leaves generally small. Some of the examples are Ceratophyllum, Utricularia, Najas, etc. In Ceratophyllum, roots are lacking even in embryo stage, sometimes leafy branches are modified into rhizoids.

These are hydrophytes like Hydrilla, Potamogeton, Isoetes and Vallisneria, which remain completely submerged in water and rooted in soil. In Hydrilla, Potamogeton and Chara, the stem is long, bearing small leaves at the nodes. Hydrilla is a slender weed with fibrous roots. In Isoetes and Vallisneria stem is tuberous (corm like) with long leaves, which are narrow, ribbon shaped. 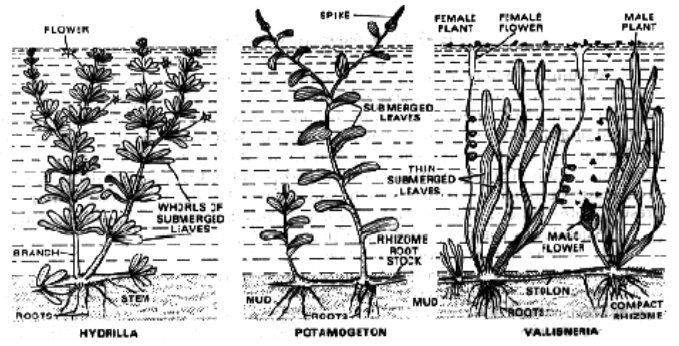 These are also called amphibious plants. They grow in shallow waters along the margin of pond/lake. e.g. Ranunculus, Sagittaria, Monochoria Typha, Cyperus these are such hydrophilus forms which, although require excess of water, but their shoots (assimilatory organ) are partly or completely exposed to air. The root system is completely under water, fixed in soil. in some, as Sagittaria and Ranunculus, shoots are partly in water and partly emerging i.e., exposed to air, whereas in others such as Scirpus and Cyperus also known as marshy plants, the shoots are completely exposed to air. 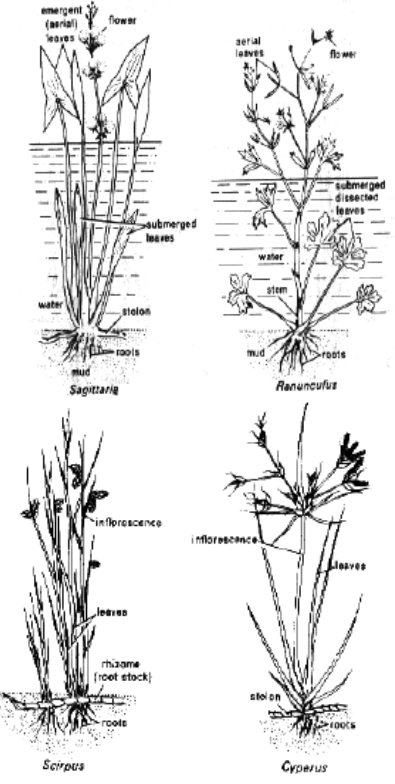 Hydrophytes may differ from each other in some aspects, but most of the characteristics morphological as well as anatomical, are common to all of them. Due to these similarities, they belong to the same ecological group; the hydrophytes.

In Salvinia submerged leaves compensate for roots. However, in emergent forms as Ranunculus which grow in mud, roots are well developed with distinct root caps. Root hairs are absent or poorly developed. Root caps are usually absent. In some cases, as in Eichhornia, root caps are replaced by root pockets.Roots, if present, are generally fibrous; adventitious, reduced in length, unbranched or poorly branched. In Lemna, roots act simply as balancing and anchoring organs. In some plants as Jussiaea repens, there develop some floating aerial roots also in addition to normal adventitious roots.

In submerged forms as Hydrilla and Potamogeton, stem is long, slender, spongy and flexible. In free floating forms it may be slender, floating horizontally on water surface as in Azolla or thick, short, stoloniferous and spongy as in Eichhornia. In forms which are rooted with floating leaves, it is a rhizome as in Nymphaea and Nelumbo. Vegetative propagation by runners, stolons, stem and root tubers, dormant apices, offsets etc., is the most extensive and common method of reproduction. Thus most of them are perennials.

In submerged forms, leaves are thin, and are either long and ribbon shaped as in Vallisneria, or long and linear as in Potamogeton, or finely dissected as in Ceratophyllum. Floating leaves are large, flat and entire as in Nymphaea and Nelumbo with their upper surface coated with wax. Their petioles are long, flexible and often covered with mucilage, in Eichhornia and Trapa petioles become swollen and spongy. Emergent forms as Ranunculus and Sagittaria show heterophylly with submerged, floating, and aerial leaves. Emergent leaves are generally translucent.

These are less common in submerged forms. Where flowers develop seeds, are rarely formed.

The distribution of various tissues in roots of hydrophytes, in general, becomes clear from figure showing transverse sections of roots.

It may be concluded from these figures that : 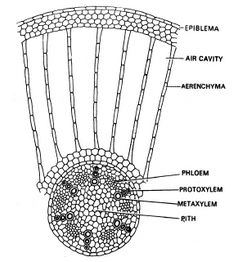 Distribution of various tissues in stems of hydrophytes becomes clear form transverse section of stem of Hydrilla. It may be seen that Cuticle is either absent or poorly developed and thin. Epidermis is usually single layered made up of thin walled parenchymatous cells. However, rhizomes of Nymphaea and Nelumbo show well developed epidermis. In emergent forms as Typha, cuticles as well as epidermis are generally well developed.

Hypodermis is completely absent in submerged forms as Hydrilla and Potamogeton. However, in floating and emergent forms, it may be present as thin walled parenchyma or collenchyma.

Cortex is well developed, thin walled and parenchymatous, extensively traversed by air cavities as seen in roots. Cells of cortex generally possess chloroplasts and are thus photosynthetic. In some cases, as Nymphaea, there are found large number of vascular bundles scattered in the cortex.

Endodermis is generally distinct, especially in rhizomes and similar organs.

In their internal structure, leaves in different hydrophytes show variations. However, some of the anatomical features are common to most of the leaves. Distribution of different tissues in leaves of hydrophytes would become clear from vertical transverse sections of leaves of Anacharis, Potamogéton and Nymphaea respectively. From these we may conclude that in leaves, Cuticle is usually absent in submerged form as Anacharis and Potamogeton. In floating forms as Nymphaea it is poorly developed confined only to upper side and is thin. In emergent forms also it is thin.

Epidermis is single layered, made up of thin walled cells with abundance of chloroplasts.Stomata are completely absent in submerged leaves as Anacharis and Potamogeton. In floating forms as Nymphaea, stomata are confined only to the upper surface of leaf, whereas in emergent forms they are generally found on both surface of leaves.

Vascular tissues are very much reduced and sometimes difficult to be differentiated into xylem and phloem as in leaves of submerged forms like Anacharis. Wherever differentiated as in Nymphaea, xylem elements are thin walled, phloem being well developed. However, in aerial leaves, vascular elements are comparatively well differentiated with vessels in xylem. 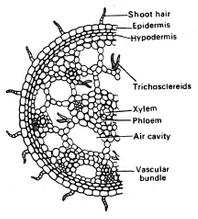 Fig. : Part of petiole of Nymphaea

Mechanical tissues are absent. The petioles, wherever well developed, as in Nymphaea, also possess internally the various tissues characteristics of a typical hydrophyte, i.e., an abundanceof aerenchyma, thin walled cells, lack of differentiation in vascular tissues and absence of any lignified mechanical tissue. We have described in detail the various morphological and anatomical features of each of the three major ecological groups of plants i.e., hydrophytes, mesophytes and xerophytes.

To sum up this detailed descriptive account of various features for the purpose of quick revision, the same has been presented in a comparative way in the table.

They are special type of xerophilous plants which grow on saline soils with high concentration of salts like NaCl, MgC12 and MgSO4. Soils are physiologically dry. Their osmotic pressure values are very high. Most of them are succulents; their leaves are evergreen, thin, small and leathery with water storage tissues, thick cuticle and well developed palisade tissue. Most of them produce special type of branched, negatively geotropic roots that come out of the mud surface to encourage the entry of oxygen gas. These roots are called pneumatophores which possess breathing pores for gaseous exchange. Some of the halophytes show vivipary i.e., germination of seeds before they are shed from parent plant. The universal feature of these plants is selective absorption and tolerance of sodium chloride, and the ability to grow in soils so saline that they are either physiologically toxic to normal plants or impose so serious an osmotic water stress that water absorption is impeded. Plant cells are bathed in a medium of high osmotic potential and thus should maintain a higher vacuole osmotic potential in order to avoid loss of water.

Halophytic communities have been divided (Warming, 1909) into: 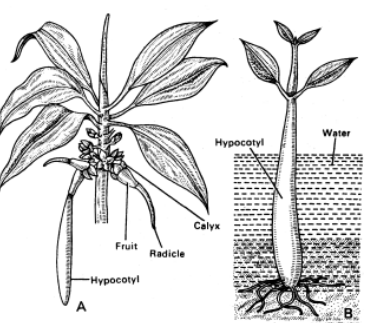 Helophilous halophytes have been further sub divided into:

Littoral swamp forests (mangroves) are most extensive, which occur in all tropical seas, especially on flat, muddy shores, where the water is relatively cairn, as in lagoons, inlets, estuaries etc. Soil is flooded with water either permanently or at high tide. These littoral swamp forests form characteristic vegetation, known as the mangroves or mangrove formations in tropical and subtropical areas. e.g. Sonneratia, Rhizophora, Avicennia.

In India, mangroves are very much prevalent on seashores of Bombay and Kerala and in Andaman and Nicobar islands. They grow on water lodged soil, where habitat is characterized by sandy, swampy and saline soils, high precipitation, high atmospheric humidity and almost no fluctuation in temperature throughout the year. The two common halophytes of this type are Rhizophora mucronata and Sonneratia. They produce stilt roots, pneumatophores, and show vivipary.

Oligotrophic soils are poor in nutrients. One such type of soil which supports dense vegetation is the one found in tropical rain forests. Here the top soil is shallow while subsoil has dense clay mixed with iron – aluminium compounds. Despite growing in oligotrophic soil, nutrient accumulation is high in vegetation. More than 84% of nutrients undergo biogeochemical circulation. A major adaptation of tropical plants is the presence of mycorrhizae. Mycorrhiza is a mutualistic association of plant roots with fungi. It is useful in retrieval of critical elements from organic compounds (e.g., phosphorus), absorption of water and protection from soil borne pathogenic fungi.

Mycorrhiza is of two types :

Some of these adaptations are described below :

Fig. : Migration as a Strategy of Adaptation of Animals

Mimicry is of two types

Batesian Mimicry : The mimic is defenseless. It has, however resemblance to a dangerous or unpalatable model so that the predator usually does not prey upon it, e.g., Viceroy Butterfly mimics unpalatable and toxic Monarch Butterfly.

Mullerian Mimicry : It is resemblance to two animal species, especially insects, both unpalatable/ferocious, to their mutual benefit, e.g., Monarch Butterfly and Queen Butterfly.