“The volume of a given mass of a gas at constant temperature is inversely proportional to the pressure” P1V1 = P2V2.

“At constant pressure, the volume of a given mass of a gas at 0°C, increases or decreases by 1/273 times its volume for every degree rise or fall in temperature respectively”. 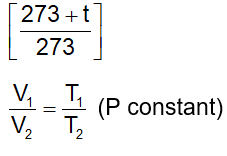 Conditions of liquefaction of gases

Do follow NCERT text book and solve questions with the help of Physics Wallah. NCERT solutions for Class 11 chemistry.  Students can also access the Class 11 Chemistry Notes from here and If any students need to take the online test to check their concepts or undertstanding then they can visit Quiz for States of Matter.

Download free pdf sheet which consist of formulas and important points of Gaseous State from the link given below .