1. Define growth, differentiation, development, dedifferentiation, redifferentiation, determinate growth, meristem and growth rate.
Sol. Growth is defined as a vital process which brings about an irreversible and permanent change in the shape, size, form, weight and volume of a cell, organ or whole organism, accompanied with increase in dry matter.
Differentiation is a localised qualitative change in size, biochemistry, structure and function of cells, tissues or organs, e.g., fibre, vessel, tracheid, sieve tube, mesophyll, leaf etc. Thus it is a change in form and physiological activity. It results in specialisation for particular functions.
Development may be defined as a process which includes growth, differentiation and maturation in a regular sequence in the life history of a cell, organ or organism viz., seed germination, growth, differentiation, flowering, seed formation and senescence. Dedifferentiation is the process by which the differentiated cells which have lost the ability to divide under certain circumstances, become meristematic and regain the divisibility. Redifferentiation is defined as maturation or differentiation of dedifferentiated cells to form cells which are unable to divide e.g., secondary xylem elements, cork cells etc., are formed by redifferentiation of secondary cambial cells.Determinate growth is the ability of a cell, tissue or the organism to grow for a limited period of time. Meristem is a tissue consisting of unspecialised immature cells, possessing the power of continuous cell division and adding new cells to the body. Growth rate is defined as the increased growth per unit time.
2. Why is not any one parameter good enough to demonstrate growth throughout the life of a flowering plant?
Sol. A flowering plant consists of a number of organs viz., roots, stem, leaves, flowers, fruits etc. growing differently under different stages of life cycle. These plant organs require different parameters to demonstrate their growth. In plant organs like fruits, bulbs, corms etc. fresh weight is used for measuring their growth. In case of fruits, increase in volume, diameter etc., are also used as other parameters for the measurement of their growth. For flat organs like leaves, increase in surface area is used as the parameter. Stem and roots primarily grow in length and then in girth, thus increase in length and diameter are used for measuring their growth. Consequently, the flowering plants exhibit several parameters to demonstrate growth.
3. Describe briefly
(a) Arithmetic growth
(b) Geometric growth
(c) Sigmoid growth curve
(d) Absolute and relative growth rates
Sol. (a) Arithmetic growth: If the length of a plant organ is plotted against time it shows a linear curve, the growth is called arithmetic growth. In this growth, the rate of growth is constant and increase in growth occurs in arithmetic progression e.g., length of a plant is measured as 2,4, 6, 8,10,12 cms at a definite interval of 24 hrs. It is found in root or shoot elongating at constant rate. Arithmetic growth is expressed as Lt = L0 + rt Here, Lt = length after time t. L0 = length at the beginning, r = growth rate. 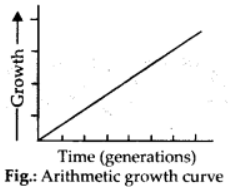 (b) Geometric growth: Geometric growth is the growth where both the progeny cells following mitosis retain the ability to divide and continue to do so. It occurs in many higher plants and in unicellular organisms when grown in nutrient rich medium. Number of cells is initially small so that initial growth is slow which is called lag phase. Later on, there is rapid growth at exponential rate. It is called log or exponential phase. 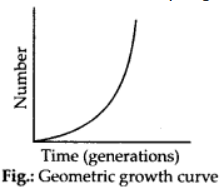 (c) Sigmoid growth curve: Geometric growth cannot be sustained for long. Some cells die. Limited nutrient availability causes slowing down of growth. It leads to stationary phase. There may be actually a decline. Plotting the growth against time will give a typical sigmoid or S-curve. 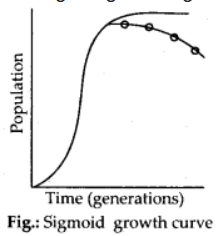