The term fungus (plural : fungi) is a Latin word meaning mushroom, and this term was coined by Gaspard Bauhin (1560-1624). The science of study of fungi is known as mycology (Greek, mykes : mushroom; logos: study) or mycetology.

Whittaker (1969) placed this group of achlorophyllous organisms in a separate kingdom fungi.

Definition: Alexopoulos (1952) defined fungi as nucleated, achlorophyllous organisms, which typically reproduce sexually and asexually and whose usually filamentous, branched somatic structures are surrounded by walls containing cellulose or chitin or both.

Distribution : There are more than 100,000 species of fungi, which are cosmopolitan in distribution.

Habitat : Fungi are ubiquitous i.e., found in almost every habitat. They flourish well in moist, dark and warm conditions. The most usual habitat of fungi is wet soil rich in humus. A few forms are aquatic (e.g., Saprolegnia, Allomyces, Achlya).

Fungi lack chlorophyll and are unable to synthesize their own food by the process of photosynthesis. Therefore, they obtain their nutrition from the external source by the process of extra cellular digestion and absorption of the digested material. Such mode of nutrition is called heterotrophic and absorptive, and the organisms are called heterotrophs.

According to their mode of nutrition, fungi are of two types: parasites and saprophytes.

The mycelium may be aseptate and septate. Aseptate mycelium lacks septa. It is multinucleate and is called coenocytic, e.g., members of Phycomycetes. In aseptate mycelium, septa formation occurs at the time of injury and during separation of reproductive structures. Septate mycelium is partitioned into separate compartments by means of cross walls (septa). Individual cells may be uninucleate, binuclate or multinucleate.

Each septum is perforated by a central pore. The pore may be either simple or dolipore.

Fungi are eukaryotic and possess true nuclei. Fungal cells are bounded by definite cell wall. The cell wall is made up of fungal cellulose/chitin (nitrogen containing polysaccharide or heteropolymer of acetyl glucosamine which are also found in insects). True cellulose is found in cell wall of some Phycomycetes (e.g., Phytophthora).

The cell wall encloses protoplast, which is differentiated into plasma membrane, cytoplasm, nucleus and vacuoles. Cytoplasm has all the eukaryotic cell organelles, except plastids. The dictyosomes are also not typical. Lomasome is a convoluted complex of membranous outgrowth of plasmalemma.

Vacuoles are many but small.

Reproduction can be vegetative, asexual and sexual.

Fragmentation : Mycelium may break accidentally or due to decay into two or more parts. Each segment develops into complete mycelium.

Budding : The protrusion grows out into a bud. The bud constricts at the base and separates into a new individuals e.g., yeasts. Sometime a number of buds may be seed attached to the parent cell (torula stage).

Chlamydospores : They are thick walled, black, multinucleate resting spores formed by the collection of protoplasm at one or many places from the adjacent places. They are mostly intercalary and after the separation, germinate to produce new mycelia, e.g., Rhizopus, Mucor, Ustilago, etc.

Oidia (Arthrospores): Oidia are thin walled structures produced in chain. They are formed by the segmentation of hypha in the presence of excess water, sugar and salts. They germinate immediately after liberation and produce new mycelia, e.g., Mucor. The oidia formation in Mucor represents the Torula stage. 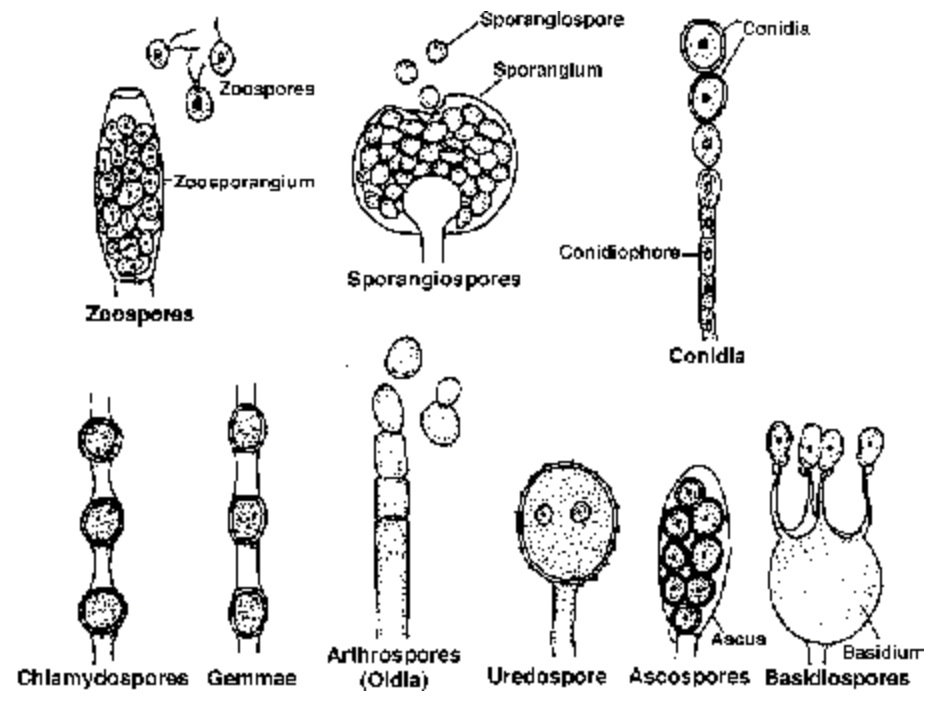 The zoospores are thin walled flagellated spores produced inside a sac like structure known as zoosporangium. Zoospores may be uniflagellate or biflagellate. The flagella occur anteriorly, laterally or posteriorly, e.g., aquatic fungi.