It is a highly polished surface, which is quite smooth and capable of reflecting a good fraction of light from its surface.

Anything which gives out light rays (either its own or reflected) is called an object.

(i) Real object : All physical objects and light sources are real which either scatter light rays or produce light rays.

(ii) Virtual object : When converging incident rays, incident on eye or an optical device, there is no single point from which light rays are coming. In this case we say object is virtual.

The reproduction of object formed by mirror or lens is called an image. 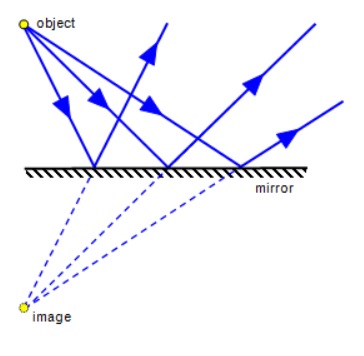 The images formed from a plane mirror are the reflected images in their normal proportions but reversed from left to right. These are the most widely used mirrors.

CHARACTERISTICS OF IMAGE FORMED BY A PLANE MIRROR :

NUMBER OF IMAGES FORMED WHEN THE OBJECT IS PLACED BETWEEN TWO PLANE MIRRORS :

When two plane mirrors are placed facing each other, act at an angle and an object is placed between them, multiple images are formed as a result of multiple reflections.

Curved mirrors are slightly more complicated. There are basically two types of curved mirrors: concave and convex. A concave mirror curves toward the incoming light while a convex mirror curves away from the incoming light. For now, we will assume that light waves striking the lens are from an object infinitely far away, therefore, the light waves will be parallel with the principal axis.

When light strikes a concave mirror of curvature radius R, the light waves will reflect and converge at a point on the principal axis that is 1/2 × R in front of the mirror. This point is called the focal point. Since light is converging at the focal point, it is also diverging from that point on the other side. Therefore, the image of the object is created at the focal point, appearing as if the object is actually there. Notice that this image is not like the image of the plane mirror, light actually pass through where the image is. This type of image is called a real image.

When light strikes a convex mirror of curvature radius of R, the light waves will reflect and appear to diverge from a point on the optic axis that is 1/2 * R behind the mirror. Just like that of the concave mirror, this point is also called the focal point. The image of the object, even if the object is infinitely far away, will appear as if it is 1/2 * R behind the mirror. 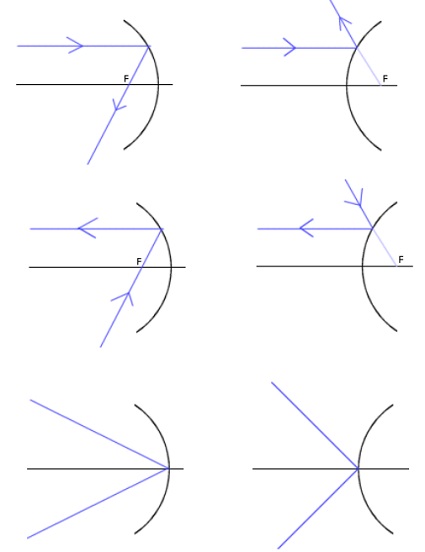 The object distance, image distance, and focal length are all related by the image equation: To score More in your class 8 refer NCERT solutions for class 8 .

NCERT Solutions for class 8 science will be highly helpful 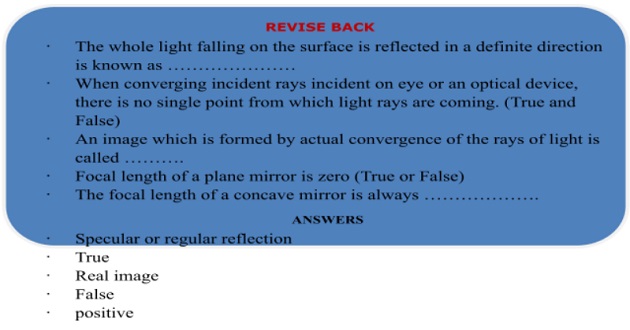