Phosphorus is one of the most important ingredients of the protoplasmic materials (nucleotides, nucleic acids, ATP, GTP, NAD, NADP, FAD, Phospholipids, co-enzymes etc.) of autotrophic as well as heterotrophic organisms of the ecosystem.

Phosphorus is also added to soil from external source as chemical manure in crop fields (man’s engineered ecosystem).Weathering of rocks and decomposition of organic wastes provide phosphorus to soil.

Plants take phosphorus as orthophosphates from soil solution through their roots and incorporate it in their biomass.

Secondary producers obtain their phosphorus requirements from primary producers directly or indirectly in the form of organic phosphorus. After the death of organisms of various trophic levels, their dead organic remains are subjected to microbial decomposition. 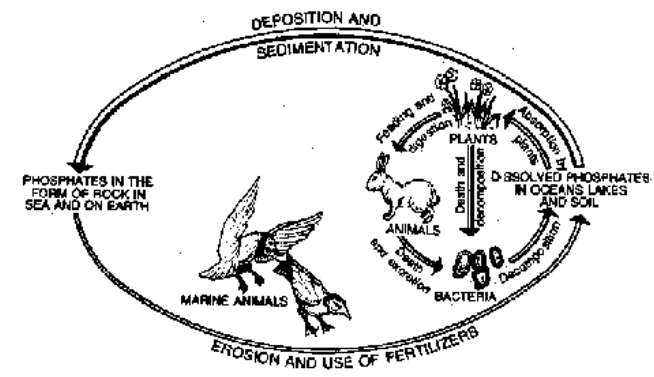 Fig. : A phosphorous cycle in nature

Aspergillus, Penicillium, Fusarium, many Bacilli and Pseudomonas are commonly found associated with rhizosphere flora. It is a type of protocooperation between the microorganisms and roots of higher plants, where both the partners are obliged or benefited but they do not establish physical or physiological contact.

Different parts of the world are inhabited by different species of plants and animals. The major terrestrial biotic communities of the world, each comprising a characteristic array of plant and animal life are called biomes. They are the largest ecological units. The biomes contain many ecosystems, but are defined by climate.

They are of two types :

The characteristic vegetation of forest biomes is dominated by densely growing trees having a closed or nearly so, canopy cover. Depending upon the climate type, a wide variety of forest types occur in the world.

Major forest biomes in India are :

The tropical rain (evergreen) forest biome occupies low-lying areas near the equator with heavy rainfall. It is found in central America, the Amazon and Orinoco river basins of South America, the Congo river basin of Africa, Malagasy Republic and South-East Asia. In India, the tropical rain forests occur along the West coast and in and around Assam. This biome covers about 1/12th of the earth’s surface but has over half of the world’s flora and fauna. The tropical rain forests are very thick and nearly impenetrable, hence called jungles.

The climate is warm and moist, and there are almost no seasonal variations. There are, thus, excellent conditions for plant growth throughout the year.

The rainfall is high (about 200 cm or more annually) and uniform, there being no dry periods, hence the name rain forests. The sunlight is strong, but very little light reaches the ground through the dense foliage. Temperature is high and fairly constant. The soil is very rich in minerals and humus as the high temperature and moisture are favourable for the decomposition of fallen leaves and dead organic matter by the decomposers.

The tropical deciduous forest biome is found in the West Indies, the Eastern region of Brazil, the central plateau of India, Indo-China and the North-Eastern projection of Australia. The climate is warm, and there is a marked alternation of wet and dry seasons. The annual rainfall varies from 100 to 200 cm. The sunlight is strong, and enough of it reaches the ground through the foliage to support vegetation. The soil is rich in minerals and humus as the climate is favourable for the reducers to decompose the fallen leaves. Life is rich in the tropical deciduous forest biome also.

Temperate broad-leaf forests mainly occur between 1500 and 2400 m altitude in the western Himalayas. Several species of oak (Quercus) predominate in the temperature broad-leaf forests. These include banj oak (Quercus leucotrichophora), and rianj oak (Q. lanuginose). All oak species in the Himalayan region are evergreen. The evergreen oaks in Himalaya show peak leaf fall during summer, but never become leafless. These four strata forests have 25-30 m height. The tree canopy is dense, herbaceous layer is least developed, and grasses are generally lacking. The oak forests are often rich in epiphytic flora.

Grassland ecosystems have treeless herbaceous plant cover dominated by wide variety of grass species (family, Poaceae). These occupy about 19% of the total land mass. These biomes are characterized by the presence of grasses of varying sizes.

Tropical grasslands : These grasslands have scattered trees and savannah. This is meadow like plain biome mainly found in South America, Africa and Australia. These are also found in India, Burma and adjoining areas.

Other common animals are mice, rabbit, fox, wolf, tiger and lion. Kangaroo occurs in savannah of Australia. This biome is ideal for hunting.

They are natural as well as anthropogenic. Indian savannas are largely anthropogenic being derived from tropical forests and maintained by grazing as well as fire. Availability of soil moisture determines composition and productivity. Root system of grasses are present in upper 30 cm of soil while that of woody species penetrate to deeper horizons.

Many of them perform C4 photosynthesis that is helpful in maintaining high productivity even under conditions of low soil moisture. Hoofed herbivores are quite common. Animals include Antelope, Zebra, Giraffe, Goat, Gazelle, Rhino, Elephant, Fox, Wolf, Lion, Tiger, Kangaroo (in Australia).

Desert biome experiences prolonged moisture scarcity. The desert biome covers about one-fifth of the earth’s surface. Deserts are generally located in rain shadow areas, around latitudes 20 to 30° north and south, where dry air from the equator falls from the upper atmosphere, warming as it is compressed near the earth.