Certain genes which cause the death of organism (if present in them) during early stages of development are known as lethal genes. Two dominant or recessive genes in homozygous condition cause the death of the organism. The individual survives only in heterozygous condition. The phenotypic and genotypic ratio in F2 will be 2:1. Soon after the rediscovery of Mendelism, Cuenot (1905) studied the inheritance of colour and recessive lethal genes in mice.

E. Baur (1907) discovered first case of lethal gene in plant, Snapdragon (Antirrhinum majus). In this plant, a yellow leaved dominant genotype called aurea when crossed with its own type (aurea × aurea), aurea heterozygous and normal green plant in 2: 1 ratio were obtained. Aurea coloured plants containing dominant genes in homozygous condition (GG) do not survive due to lack of chlorophyll synthesis. 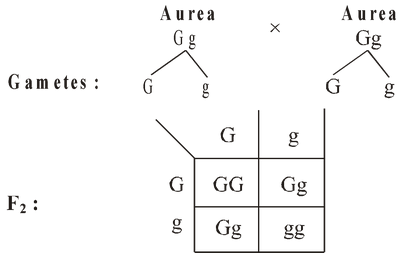 In dihybrid and polyhybrid crosses too, the expression of genes is not independent of each other and depends on the presence or absence of other genes. Intergenic or nonallelic interactions occur between the alleles of different genes present on the same or different chromosomes to alter the normal phenotype.

A few modifications depending on interaction of genes are as follows:

Flower colour in Pea. Bateson and Punnet (1906) made a cross between two white flowered varieties of sweet pea (Lathyrus odoratus) in which F1 progeny was purple flowered. The flower colour in L. odoratus is determined by two dominant genes C and P. When purple individuals of F1 are self-pollinated, they produce purple and white in the ratio of 9:7. Bateson assumed that 9:7 is merely the modification of Mendelian F2 ratio 9:3:3:1 in which the last three classes (3:3:1) have the same phenotypic ratio. The two white varieties of L. odoratus have the genotype CCpp and ccPP.Here dominant gene C produces an enzyme that catalyzes the formation of colourless chromagen. Dominant gene P produces an oxidase enzyme that oxidizes chromagen into purple coloured anthocyanin, and thus purple colour is produced. This is confirmed by mixing the extract of the two types of flowers when purple colour is formed. Therefore, at least one C gene and one P gene must be present to produce purple flowers. The absence of any one or both results in white flowers. 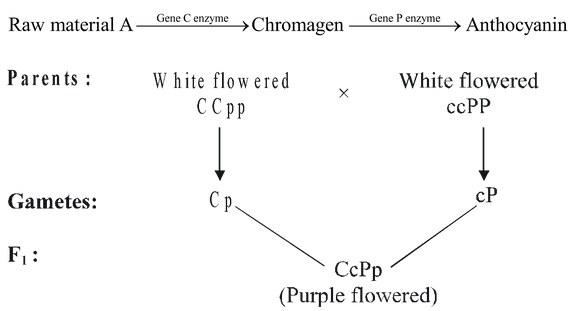 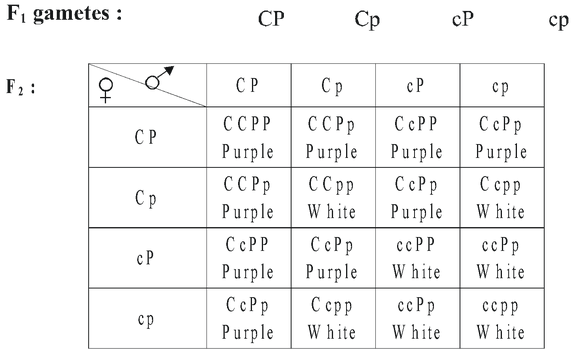 In Lathyrus odoratus, the complementary genes also show recessive epistasis. When either of the two genes in double recessive state (cc – , pp – , ccpp), the dominant allele of the other gene (cc P – , C – pp) is unable to express its effect. Consequently, the flower colour is white. When the epistatic effect is absent (C – P – ) the dominant alleles of both the genes become operational and produces purple colour of their joint activity.

Supplementary genes are two non-allelic genes in which one gene produces its effect whether the other is present or not, and the second (supplementary) gene without any independent effect, modifies the effect of the former to produce a new trait. 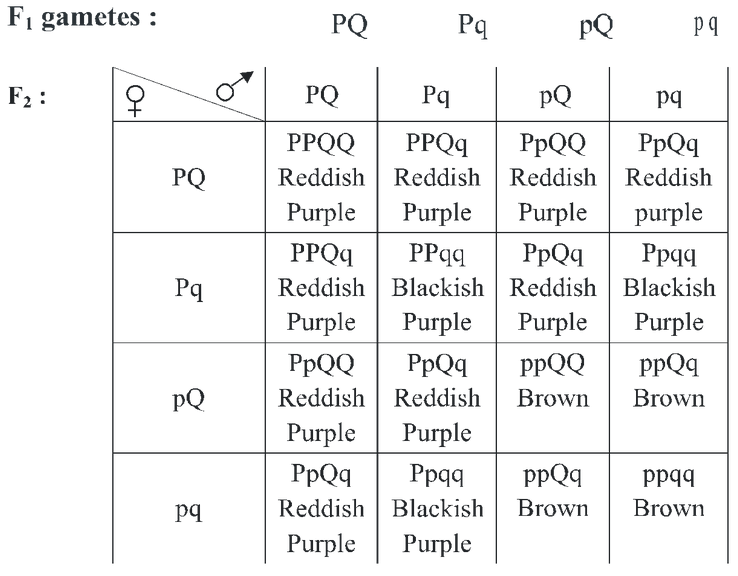 Epistasis was first studied by Bateson.

Epistasis (Gk. act of stopping) is the phenomenon of suppression of phenotypic expression of a gene by a non allelic gene (present at separate loci) which shows its own effect. The gene which masks the effect of another is called epistatic gene while the one which is suppressed is termed hypostatic gene.

Epistasis is similar to dominance but the two factors occupy two different loci. The epistasis involves intergenic suppression, while dominance involves intragenic suppression. Epistasis may be caused by the presence of homozygous recessives at one gene pair or by the presence of a dominant allele at a gene pair. In addition the epistatic effect may be in only one direction or in both directions.

It is of mainly two types :

DOMINANT EPISTASIS (12:3:1 RATIO) :A dominant epistatic allele suppresses the expression of a nonallelic gene whether the latter is dominant or recessive. 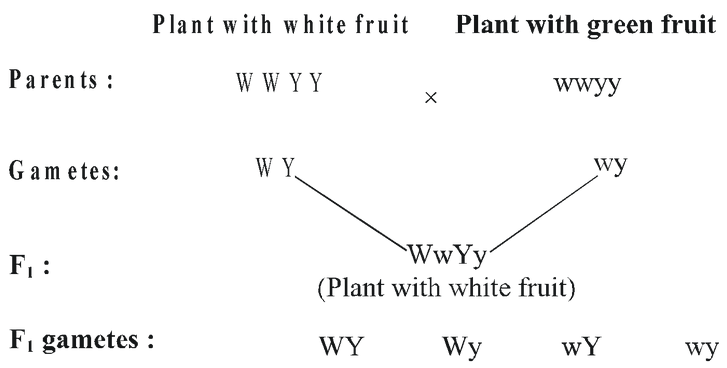 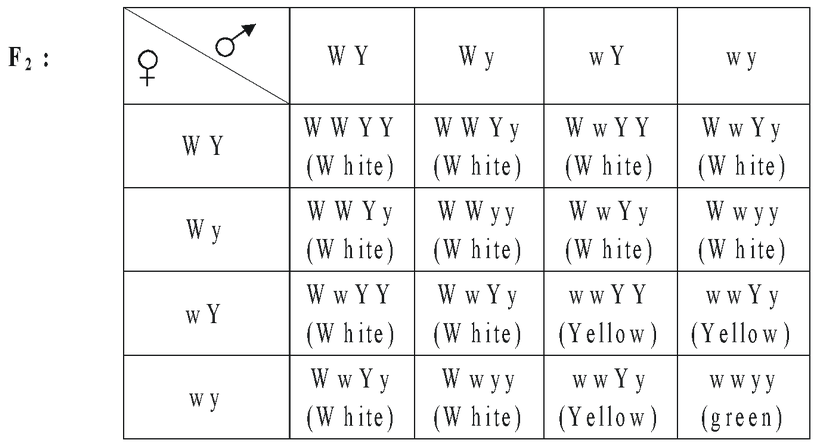 Epistatic gene suppresses the expression of nonallelic gene only when it (epistatic) is in homozygous recessive state.

In mice, the wild body colour is known as agouti. The agouti colour is controlled by a gene, say A, which is hypostatic to recessive allele ‘C’. The dominant allele C in the absence of A gives black mice. Moreover, in the presence of dominant allele C, A gives rise to agouti. Therefore, CCaa will be black and ccAA will be albino. Here, cc masks the effect of AA and is, therefore, epistatic. Consequenty, ccAA is albino. However, ccaa is also albino, but not due to epistatsis but due to the absence of both the dominant alleles. Black mice (CCaa) crossed with albino mice (ccAA) produced agouti mouse (CcAa) in F1. On selfing, in F2 agouti mice, black mice and albino mice are produced in a ratio of 9:3:4. 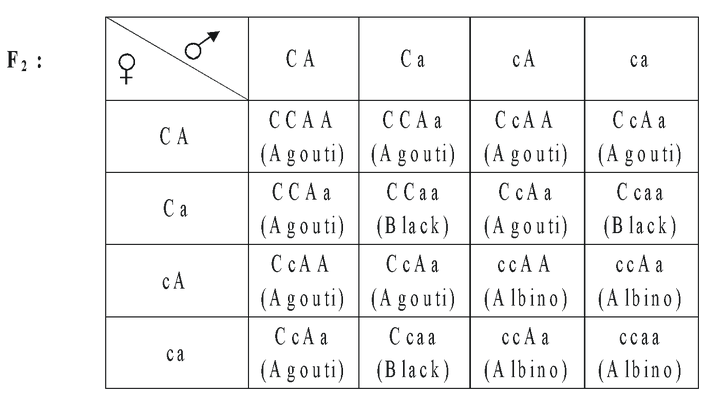 When two pairs of genes located on different chromosomes determine the same phenotype then they are called duplicate genes. 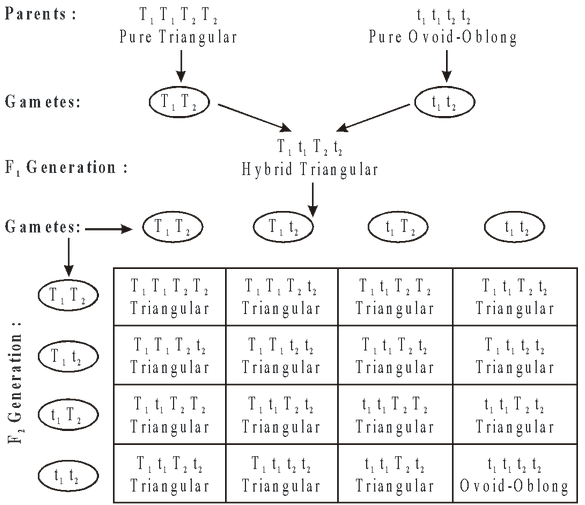 Fig. : Inheritance of capsule shape in Capsella indicating the action of duplicate genes.

Two independent dominant genes, whether present in homozygous or heterozygous condition, have similar phenotypic effect when present individually but produce a cumulative or double effect when found together. The effect is produced in 9/16 of the population. 6/16 population forms simple dominant trait as phenotypes produced by single gene dominance of the two different genes are similar. Therefore, a dihybrid ratio of 9 : 6 : 1 is obtained in the F2 generation.

Cucurbita pepo (Summer Squash) has three types of fruit forms—disc-shaped, spherical and long. Spherical shape is dominant over long shape. The shape is produced individually by one of the two dominant genes, S1 (– S1s2s2) and S2 (s1s1S2–). When both the dominant genes are brought together (–S1S2–), disc-shaped fruits are formed indicating that the two independent genes are acting in additive or cumulative fashion. This is observed by self pollinating the F1 hybrids having disc-shaped fruits. F2 generation has a ratio of 9 discoid, 6 spherical and 1 long. 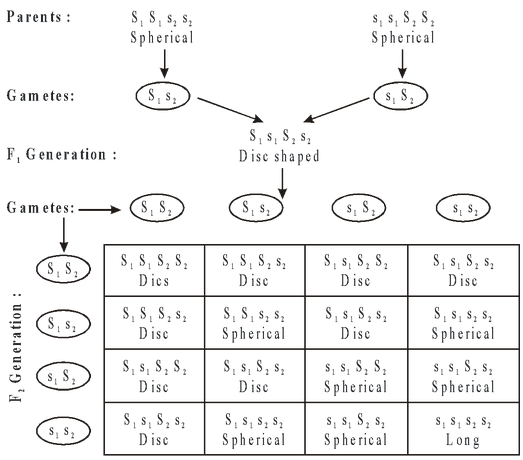 Fig. : Inheritance of capsule shape in Capsella indicating the action of duplicate genes

A non lethal gene without any expression of its own but suppresses or inhibits the expression of a nonallelic gene, is called inhihitory or suppressor gene.

Feather colour in Fowls. In rice, purple colour of leaf is due to the presence of gene P and its recessive allele (p) determines green colour. The gene I inhibits the expression of P so that leaves become green (IP). Green leaves also occur when the genes are recessive (iipp) A cross between two green leaved plants having different genotypes (IIPP and iipp) yields green leaved plants (IiPp) in F1. On selfing, in F2 green and purple leaved plants are segregated in 13:3 ratio. 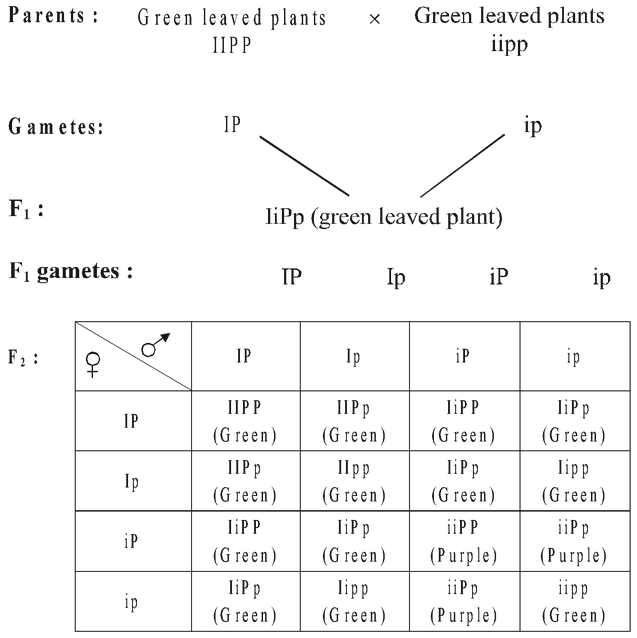