Fertilization: The fusion of male gamete with the female gamete to form a diploid zygote within the embryo sac is called fertilization. 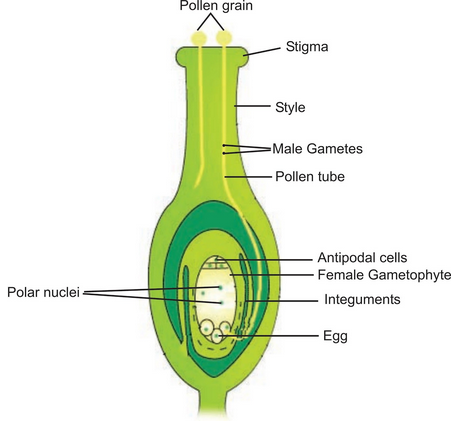 (i) Due to pollination the related pollen grains are deposited over the receptive stigma of the carpel.

(iii) The pollen tube grows into the stigma, passes through the style and then moves towards the ovarian cavity.

(iv) Two male gametes are formed inside the tube during its growth through the style.

(v) After reaching the ovary, the pollen tube enters the ovule with its tip piercing the egg apparatus.

(vi) The tip of the pollen tube ruptures releasing two male gametes into the embryo sac.

(vii) One male gamete fertilizes the egg to form the diploid zygote by the process of syngamy.

(viii) The other male gamete fuses with the two polar nuclei to form the triploid (3n), primary endosperm. This is known as triple fusion. The mechanism involving two acts of fertilization in an embryo sac is called double fertilization.

Formation of fruits and seeds

(i) The fertilized egg divides several times to form an embryo within the ovule.

(ii) The ovule then develops a tough coat around it which gradually gets converted into a seed.

(iii) All the fertilized eggs in the ovules present in an ovary grow to become seed.

(iv) The ovary of the flower develops and becomes a fruit, which may be soft like mangoes; juicy like oranges; hard, dry and woody like peanuts and almonds.

(v) The petals, sepals, stamens, style and stigma may shrivel and fall off.

(vi) The fruit protects the seed. The seed is the reproductive unit of a plant. It contains the baby plant.

(viii) The part of the seed which contains stored food for the baby plant is called cotyledon.

(ix) The baby plant inside the seed develops into a seedling under suitable conditions like water, air, temperature, etc. This is called germination.

DIFFERENCES BETWEEN SELF POLLINATION AND CROSS POLINATION: 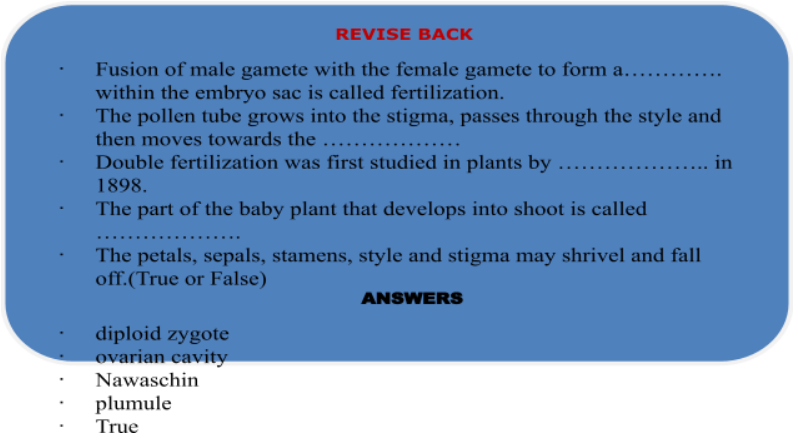