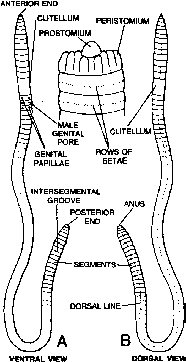 Fig. A. Ventral view of P.posthuma;

B. Dorsal view of its anterior end

Note : If we put body wall in 20% KOH, then setae remain unaffected.

Dorsal pores : Minute apertures of the coelomic chambers located mid-dorsally, one in each intersegmental groove, behind the segment 13 upto the last but one groove.

Male genital pores : These are a pair of crescentic apertures located ventro-laterally upon 18th segment.

Just behind the clitellum, each of the 17th and 19th segments bears a pair of small and conical ventro-lateral genital or copulatory papillae. These papillae help in copulation.

Body wall is thin, soft and slimy. It consists of the following layers from the surface inwards : 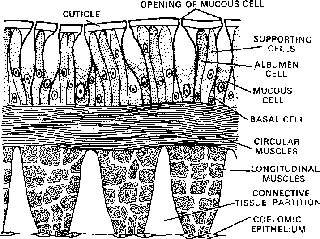 Fig. V.S. of skin of earthworm

Coelomic epithelium : is outer envelope of coelomic cavity, made up of squamous cells. 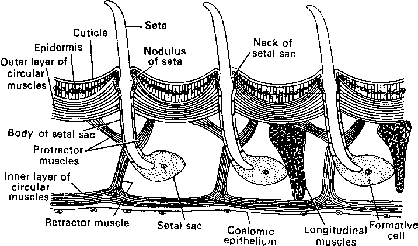 Note : Body wall of Microscolex phosphoreus is phosphorescent in nature. 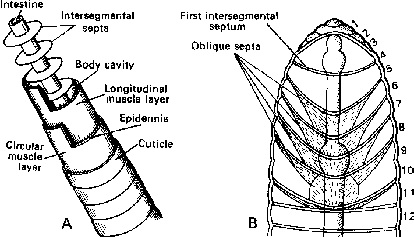 Fig. A. Diagram of “tube within a tube” type of body in earthworms.
B. Arrangement of septa in anterior part of body

Schizocoel divided by septa from 4/5 onwards.

Each septum consists of a thin layer of muscle fibres lined by coelomic epithelium on both surfaces.

The first six septa are cone-like and run obliquely backwards from the body wall to the gut wall.

The first nine septa i.e. upto septum 13/14 are without perforations. The remaining septa beginning from septum 14/15 are perforated by numerous sphinctered apertures.

Granulocytes (Phagocytes) : Most numerous and largest corpuscles. These serve to store nutrients.

Leucocytes : These are smaller and fewer. Their function is uncertain.

Mucocytes : These are elongated, vase-like corpuscles, each with an expanded fan-like part and a narrow nucleated stalk-like part. Function of these is also uncertain.

Chloragogen cells/Yellow cells : These are also numerous but much smaller and star-shaped corpuscles, each with finger-like pseudopodia. They are supposed to be excretory in function.

Originate from visceral peritoneum of stomach and intestine. Analogous to liver as store food in the form of glycogen. (Storage of reserve food, deamination of proteins, urea formation)

Note : Other corpuscles are formed by lymph glands, present on dorsal side of intestine from 26th segment to last segment. Each gland is having 10 lobes.

Coelomic fluid serves as a hydrostatic skeleton to assist the musculature of body wall in bringing about the locomotion of body. It oozes out upon body surface through dorsal pores, keeping the body wall moist to facilitate respiration and to destroy bacteria and other harmful micro-organisms.

Madreporite is a thick, rounded sieve-like calcareous plate, situated on the aboral surface of the central disc. The pores of the madreporite allow water into the system.

Tiedemann’s bodies are also known as racemose glands. In Asterias they are nine in number. Exact function is not known. They are considered to be lymphatic glands and filtering device.