Alimentary Canal : A straight tube running throughout the length of the body. It can be divided into following parts :

Oesophagus : Pharynx is followed by a straight, narrow, long tube called gullet or oesophagus. This thin-walled tube extends from the fourth upto the seventh segment.

Gizzard : In the 8th segment, oesophagus becomes enlarged so as to form a prominent, hard, oval, thick-walled structure, the gizzard. Internally, it is lined by a chitinous cuticle. The muscular walls of the gizzard help in breaking up the food particles by contraction.

Stomach : Gizzard leads into stomach, which extends from 9th to 14th segment. Both the ends of stomach are provided with spincters. The walls of the stomach are folded, vascular and glandular. The glandular folds have calciferous glands found only in Eutyphoeus and Lumbricus. These cells produce a calcareous fluid which neutralises the acidic effect of decomposing leaves, that are taken as food by earthworm.

Intestine : Behind the 14th segment, there is a wide, thin-walled tube, the intestine. It runs straight upto the anus. It has a beaded appearance due to constriction corresponding to septa. Its internal lining is ciliated, folded, vascular and glandular. 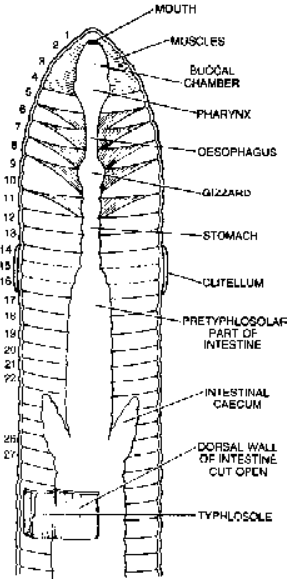 In the 26th segment, there are two conical outgrowths, one on either side, which are known as intestinal caecae. These extend forward upto 22nd segment and end blindly, their function is unknown.

It is found in the intestine upto 25th segment in front of the anus. Thus intestine can be divided into 3 regions:

Pre-typhlosolar region : Extends from 15th to 26th segment. Its wall is internally folded toform minute processes, the villi, and is highly vascular.

Typhlosolar region : This part extends from anterior 27th segment to the 25th segment in front of the anus. Both pre-typhlosolar and typhlosolar parts are digestive and absorptive in function.

Post-typhlosolar region : Also known as rectum and situated in the last 23-24 segments. It communicates to the outside through a terminal anus.

The gut wall consists of four layers in succession : -

Peritoneum : Outermost layer consisting of tall and narrow cells. Sometimes on the stomach and intestine, the cells of the peritoneum are filled with minute yellow refractive granules known as yellow or chloragogen cells. The function of these cells is not definite but are said to serve for storage of reserve food, deamination of proteins etc.

Muscles : They include an outer layer of longitudinal and inner layer of circular muscle fibres. The muscles are unstripped or involuntary.

Enteric epithelium : Consists of a single layer of columnar cells which become ciliated on the roof of pharynx, glandular in stomach and absorptive in intestine.

Cuticle : It is present in the buccal cavity as a thin lining, while in the gizzard as a thick layer.

Earthworm protrudes and retracts its buccal cavity during its movement. The food is thus taken into the mouth by the sucking action the pharynx. The passage of food into the alimentary canal is effected by peristaltic movements. The juice found in the pharynx contains mucin and proteolytic enzyme. Mucin lubricates the food. The process of digestion is intercellular as it

occurs in the cavity of the gut.

The undigested food material is passed out with the large quantities of soil particles in the form of worm castings.