The fore-gut and hind-gut are long and lined by a thin, chitinous cuticle, which is continued with the outer surface of the body. The mid-gut is endodermal in origin and it is short and narrow.

Buccal Cavity : Mouth is an elongated opening below the head which opens into a buccal cavity or pre-oral chamber, which is bounded by various mouth parts.

Oesophagus/gullet : Small, thin which enters in thorax and opens in crop.

Crop: Broadest part of alimentary canal, it occupies all thorax and some part of abdomen. It serves the purpose of storing food material. 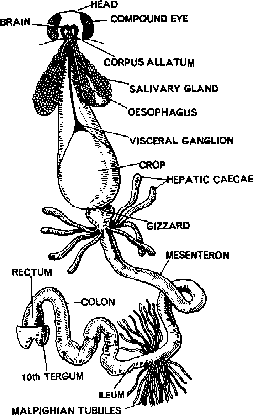 Gizzard : Crop is followed by a small, thick-walled, muscular and conical gizzard or ventriculus, whose continuous inner wall is raised into six hard, chitinous teeth. These teeth serve as an efficient grinding apparatus. Narrow part of gizzard with cuticular teeth is called armarium. Behind the teeth are six elevations or pads covered with bristles or setae, which serve as strainers and allow particles of food to pass into the mid-gut. Gizzard projects backwards into the cavity of mid-gut or mesenteron in the form of a funnel.

A short narrow tube lined by glandular epithelium and is the only region of alimentary canal, which can absorb the digested food material.

In the anterior end of the mid-gut open seven or eight short, finger like, hollow, blind tubes called the hepatic caecae, which secrete a digestive fluid.

Hind-gut/Proctodaeum : It is long, coiled part of the

alimentary canal and consists of

Salivary glands : One pair of bilobed, whitish and translucent salivary glands are present around oesophagus and crop. Each gland consists of a glandular part and reservoir. Salivary glands secrete saliva containing mucin, amylase, cellulose and chitinase.