Question1. Group the following as nitrogenous bases and nucleosides:

Solution :
Nitrogenous bases present in the list are adenine, thymine, uracil, and cytosine.

Nucleosides present in the list are cytidine and guanosine.

Question2. If a double stranded DNA has 20 per cent of cytosine, calculate the per cent of adenine in the DNA.

Question3. If the sequence of one strand of DNA is written as follows:

Write down the sequence of complementary strand in 5'→3' direction

Solution :
The DNA strands are complementary to each other with respect to base sequence. Hence, if the sequence of one strand of DNA is

Then, the sequence of complementary strand will be

Therefore, the sequence of nucleotides on DNA polypeptide

Question4. If the sequence of the coding strand in a transcription unit is written as follows:

Write down the sequence of mRNA.

Solution :
If the coding strand in a transcription unit is

Then, the template strand in 3’ to 5’ direction would be

It is known that the sequence of mRNA is same as the coding strand of DNA.

However, in RNA, thymine is replaced by uracil.

Hence, the sequence of mRNA will be

Solution :
The property of DNA double helix led Watson and Crick are:

This type of arrangement in DNA molecule led to the hypothesis that DNA replication is semi-conservative. where the two strands separate and act as a template for the synthesis of a new complementary strand.

Question7. How did Hershey and Chase differentiate between DNA and protein in their experiment while proving that DNA is the genetic material? 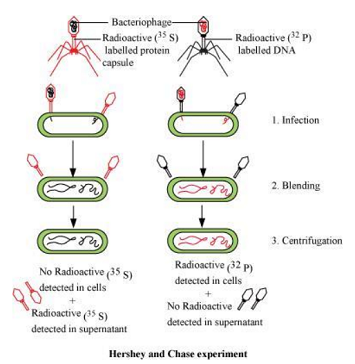 According to Hershey and Chase experiment:

Question8. Differentiate between the followings:

(a) Repetitive DNA and Satellite DNA

(b) mRNA and tRNA

(b) mRNA and tRNA

Solution :
The important functions of ribosome during translation are as follows.

(a) Ribosome acts as the site where protein synthesis takes place from individual amino acids. It is made up of two subunits.

The smaller subunit comes in contact with mRNA and forms a protein synthesizing complex whereas the larger subunit acts as an amino acid binding site.

(b) Ribosome acts as a catalyst for forming peptide bond. For example, 23s r-RNA in bacteria acts as a ribozyme.

Question10. In the medium where E. coli was growing, lactose was added, which induced the lac operon. Then, why does lac operon shut down some time after addition of lactose in the medium?

Solution :
Lac operon is a segment of DNA that is made up of three adjacent structural genes, namely, an operator gene, a promoter gene, and a regulator gene. It works in a coordinated manner to metabolize lactose into glucose and galactose.

After sometime, when the level of inducer decreases as it is completely metabolized by enzymes, it causes synthesis of the repressor from regulator gene. The repressor binds to the operator gene and prevents RNA polymerase from transcribing the operon. Hence, the transcription is stopped. This type of regulation is known as negative regulation. 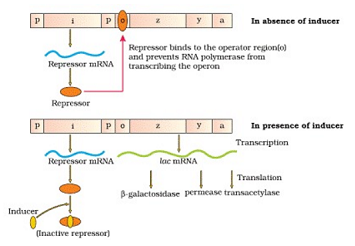 Question11. Explain (in one or two lines) the function of the followings:

Question12. Why is the Human Genome project called a mega project?

Solution :
Human genome project was considered to be a mega project because it had a specific goal to sequence every base pair present in the human genome. It took around 13 years for its completion and got accomplished in year 2006. It was a large scale project, which aimed at developing new technology and generating new information in the field of genomic studies. As a result of it, several new areas and avenues have opened up in the field of genetics, biotechnology, and medical sciences. It provided clues regarding the understanding of human biology.

Question13. What is DNA fingerprinting? Mention its application.

Solution :
DNA fingerprinting is a technique used to identify and analyze the variations in various individuals at the level of DNA. It is based on variability and polymorphism in DNA sequences.

It develops certain tools for easy and efficient access to the information and its utilization. Bioinformatics has developed new algorithms and statistical methods to find out the relationship between the data, to predict protein structure and their functions, and to cluster the protein sequences into their related families.