Current Electricity formula are listed below:

The rate of charging flow in any part of the wire is called the electric current flowing through it.

Conventional electrical current direction is the direction of the positive charge motion.

When charging, q revolves around a circle with frequency f, equal power,

(Metallic conductor current flows due to free electrons' motion while electrolytes and ionized gases flow now due to electrons and directions.)

Where I = Strength of current

Case-1: When battery is delivering current

Case-2 : When battery is charging 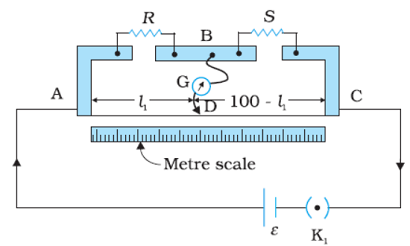 Where – x – unknown resistance of given wire, R – resistance in the resistance box, l1- balancing length from left end of the bridge to Jockey.

Where - ρ-resistivity of the wire,

A – Area of cross section of the wire,

Emf of the cell in the secondary circuit

(i) Comparison of emf’s of two cells

(ii) For determination of internal resistance of cell:

Do follow NCERT Solutions for class 12 Physics prepared by Physics Wallah. If any students need to take the online test to check their concepts or undertstanding then they can visit Quiz for Current Electricity.