Acid Base And Salt of Class 10

⇒ To see what is common in all acids, let us perform the following experiment with different acids:

Experiment to illustrate chemical nature of acids or what do all acids have in common:

Take four test tubes and label them as A, B, C and D. Place them in a test tube stand. Take about 2 ml of each dil HCl, dil H2SO4, dil HNO3 and dil CH3COOH in test tubes A, B, C and D respectively. Now add few pieces of zinc granules in each test tube.

Observation: There is evolution of hydrogen gas (H2)in each test tube which burns with a pop sound on bringing a burning candle near the mouth of tubes.

Conclusion: Hydrogen is common in all acids i.e. all acids contain hydrogen which they liberate when they react with active metals.

Thus we can say that acids are the substances which contain hydrogen ion, which they liberate when they react with active metals.

It can be explained more clearly by following experiment.

Experiment to show that all compounds containing hydrogen are not acids: The experiment is based on the fact that acids conduct electricity through their aqueous solutions. 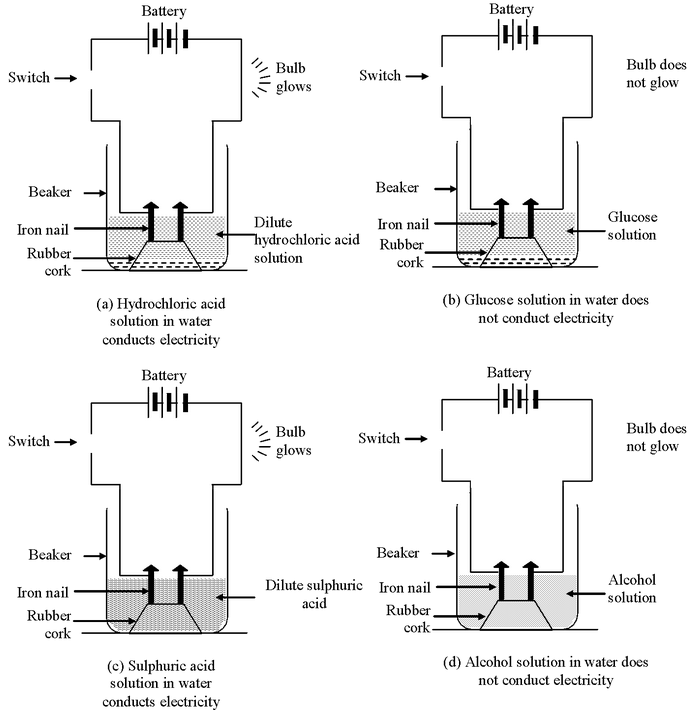 Conclusion: From the above experiment, we lead to a conclusion that only those hydrogen containing compounds are acidic which when dissolved in water give H+ ions in the solution. Thus the definition of acid is modified as:

Acids are the substances which contain hydrogen and which when dissolved in water give H+ ions in the solution. This is called Arrhenius definition of acids given by Arrhenius in 1884.

WHAT HAPPENS TO AN ACID IN WATER SOLUTION?

(ii) The wet (or moist) litmus paper turns red. It shows that HCl gas acts as an acid only in presence of water (which is present in moist or wet litmus paper).

Since H+ ions are responsible for acidic behaviour of acids, HCl gas does not show acidic behaviour with dry litmus paper and thus it does not turn the blue litmus red (due to absence of H+ ion in dry HCl gas).

Dissociation does not occur.

Since H+ ions are responsible for acidic behaviour of acids, HCl gas shows acidic behaviour with wet litmus paper and thus it turns it into red (due to presence of H+ ions in wet HCl gas) i.e.

Such dissociation of a covalent molecule like HCl into ions in the presence of water is called ionization. The ionization of HCl is shown more clearly as follows:

Dissociation of HCl into H+ and Cl− ions in presence of water.

It is clear from the figure that, after dissociation of HCl, a number of water molecules remain attached to H+ and Cl−. Hence they are represented as H+(aq) and Cl–(aq) (aq indicating water molecules)

Thus H+ does not exist freely in water, but exist in combination with water molecules. Hence, we represent it as H+ (aq.) or (H3O+).

Conclusion: The properties of an acid is due to H+ (aq.) ions or hydronium ions (H3O+) which it gives in the aqueous solution.

Acidic properties of acids are due to presence of H+ (aq.)ions or (H3O+) ions which they produce only in presence of water.

In absence of water, a substance will not form H+ (aq.) ions or (H3O+) ions and hence will not show its acidic behaviour.