Control And Coordination of Class 10

The growth regulators are the important chemicals affecting growth.

Growth hormones (phytohormones) are the natural growth substances which are produced in any part of the plant and ara transferred to another part and there they influence the growth of plant. The growth regulators consist of auxins, gibberellins, cytokinins, ethylene and abscisic acid. Except abscisic acid, ethylene the three are called Growth hormones and ethylene, abscisic acid are growth inhibitor.

It is a type ofhormone, or growth substance, found in plants. Planthormonesare molecules produced by plants to accelerate, inhibit or modify its growth. In plants, growth occurs during cell division, cell elongation and cell differentiation. The hormones can affect any or all of these different processes in plants.The first discovered plant hormone was identified as indole acetic acid (I.A.A.).

DISCOVERY Auxins were first discovered to be chemical substances and as hormones by F.W. Went in 1928.

F. W. Went coined the term auxin (Greek Auxein: to grow) to the chemical influence responsible for the phototropic response.

Auxins were first of all discovered from human urine.

IAA is a true natural auxin of plants.

A number of synthetic compounds related to auxins have been produced. Some of these are indole-3-butyric acid (IBA), a and b naphthalene acetic acid (NAA), phenyl-acetic acid (PAA), 2, 4 dichlorophenoxy acetic acid (2, 4-D) etc.

The auxins are widely distributed throughout the plant body, but their greatest amount is found in actively growing regions and the lowest amount is found in the non-growing regions. However, the concentration of auxin found at root tip is much lower than the concentration found at the shoot tip. In general, the auxins are located mainly in young and actively growing regions, such as, root apex, shoot apex, lateral meristems and enlarging leaves.

Auxins promote elongation and growth of stems and roots and enlargement of many fruits by stimulating elongation of cells in all directions.

Auxins promote cell division in vascular cambium. The reactivation of cambium in the growing season is due to the moving of IAA from the developing shoot buds. 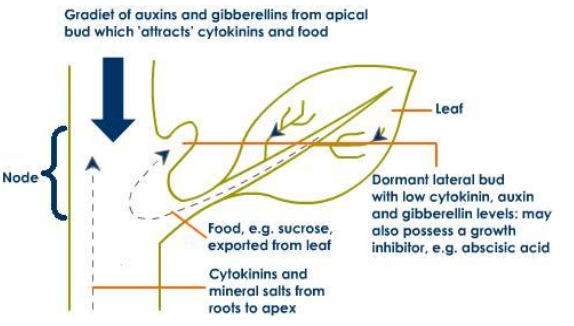 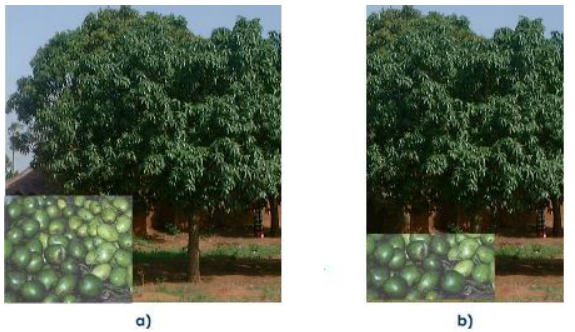 Auxin induces parthenocarpy, i.e., the formation of seedless fruits without the act of fertilisation. 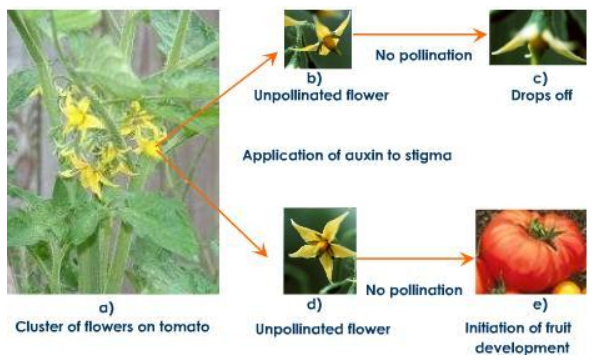 IAA stimulates cell division in the pericylce leading to the formation of lateral and adventitious roots. Auxin stimulates formation of new roots, but inhibits the root growth.

Many synthetic auxins are used as selective weed killers and herbicides. 2, 4 - D (2, 4 - dichlorophenoxy acetic acid) is used to destroy broad leaved weeds. It does not affect mature monocotyledonous plants. 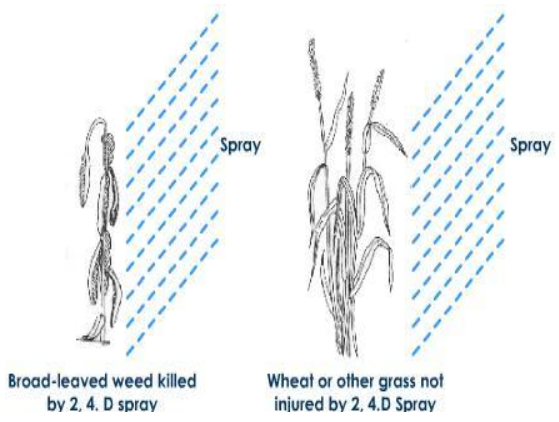 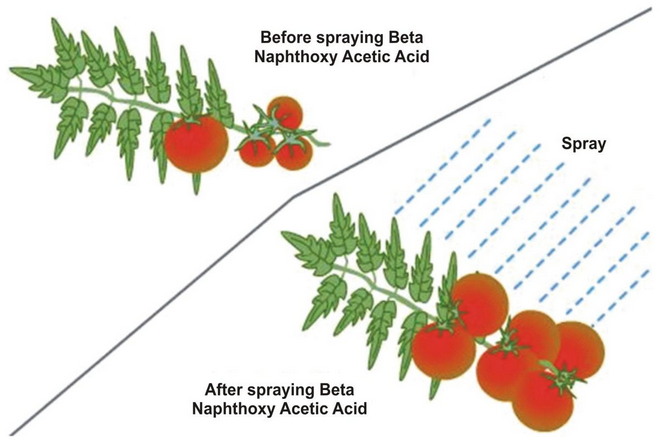 Destruction of Weeds by 2,4-D Spray

Foliar spray of NAA and 2, 4 - D induces flowering in litchi and pineapple. Percentage of ball setting in cotton plants increases when NAA or IBA are applied.

Auxins such as 2, 4 - D, IAA, IBA have been used successfully to prevent premature fruit drop in apples, pears and oranges.

Dormancy of seeds can be broken by auxin application.

The methyl ester of NAA is used to prevent the sprouting of potato tubers.

Auxins improve the quality of vegetable crops by inhibiting flower formation in some plants. 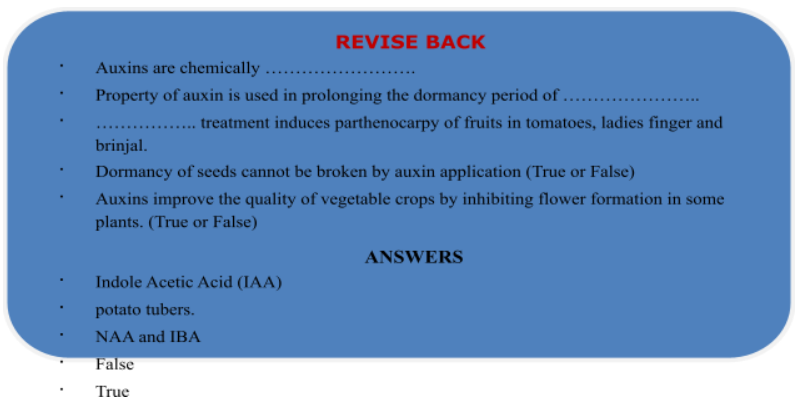