Reproduction in a flowering plant

REPRODUCTION IN A FLOWERING PLANT

Sexual reproduction in flowering plants involves transformation of diploid sporophytic cells into haploid gametophytic cells by meiosisand subsequent fusion of haploid gametes of opposite sex to form diploid zygote. The zygote then develops into an embryo which ultimately forms a diploid plant body. In flowering plants, all these steps of sexual reproduction occur within specialized reproductive organs, called the flowers.

Structure of the flower :Morphologically flower is a modified shoot meant for sexual reproduction of the plant. Typically, it is a condensed branch in which internodes have become condensed, bringing nodes very close to one another, and the leaves are modified to form floral whorl that directly or indirectly participate in the process of reproduction.

The flower is commonly borne on short or long stalk called the pedicel. It has an upper swollen region known as receptacle (thalamus or torus). 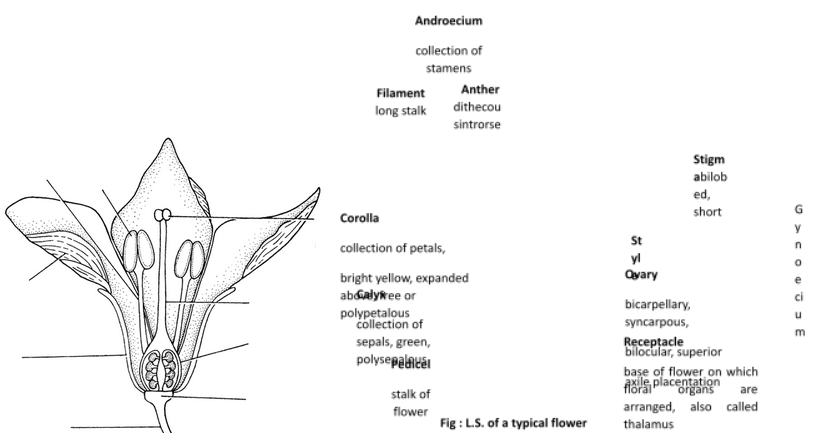 (2) Parts of a flower :A typical angiospermic flower consists of four whorls of floral appendages attached on the receptacle : calyx, corolla, androecium and gynoecium. Of these, the two lower whorls (i.e., calyx and corolla) are sterile and considered as nonessential, accessory or helping whorls. The two upper whorls (i.e., androecium and gynoecium) are fertile and considered as essential or reproductive whorls.

(i) Calyx :It is the outermost whorl of the flower. It is composed of leaf like green sepals. The sepals are essentially green in colour but in some cases they are coloured like petals. Such a condition of calyx is called petaloid. Sepals enclose the bud and protect the delicate part within. They prevent rapid transpiration from the inner parts of the flower.

(ii) Corolla :This is the second whorl of the flower and consists of a number of petals. Petals are generally brightly coloured and sometimes fragrant which make the flower to become attractive. Petals usually attract the insect pollinators and helps in pollination. The petals and sepals together form the floral envelope (perianth).

(iii) Androecium :It is the third whorl of flower and is the male reproductive organ consisting of stamens. Each stamen is made of filament and anther. The filament supports anther at its tip. Usually anthers are bilobed and contain four microsporangia (or pollen sacs), but sometimes they have only one lobe and two microsporangia. The portion of stamen which connects the anther and the filament is known as connective.

(A) Filament: It forms the stalk that bears more or less cylindrical or ovoid anther.

(B) Connective: it connects anther to filament.

(C) Anther: It is present on the top of filament. Each anther consists of two lobes that is why it is called as bi-lobed. Each anther lobe has two pollen sacs which contain millions of tiny microscopic pollen grains, called as microspores. The pollen grains are like yellow dusty powder in appearance. 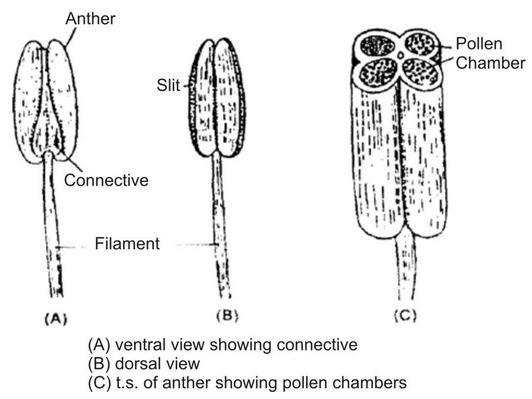 (iv) Gynoecium :This is the last and the fourth whorl of flower and is the female reproductive organ of the flower. It occupies the central position on the receptacle and composed of ovary, style and stigma and the component parts are called carpels.Ovary encloses the ovules. Stigma is the receptive spots which lodges the pollen grains. Style is the connection between stigma and ovary.

(A) Ovary: It is a basal, swollen part of the pistil. The ovary has one or more chambers called the loculi which are distributed in a special cushion like parenchymatous tissue called the placenta, from which the ovule develops.

(B) Style: From the top of the ovary arises a long, elongated structure called as style.

(C) Stigma: The terminal end of style is called as stigma. It is rough, hairy or sticky to hold pollen grains during pollination process.

Types of flower based on reproductive organs

(a) Unisexual: In such flower, only one reproductive part is present, either male (stamen) or female (pistil) e.g. cucurbits, mulberry, papaya, watermelon, etc.

(b)Bisexual: When stamens and carpel are found in the same flower, it is called hermaphrodite or bisexual, e.g. Hibiscus (chinarose), mustard, rose, pea, cotton, etc. 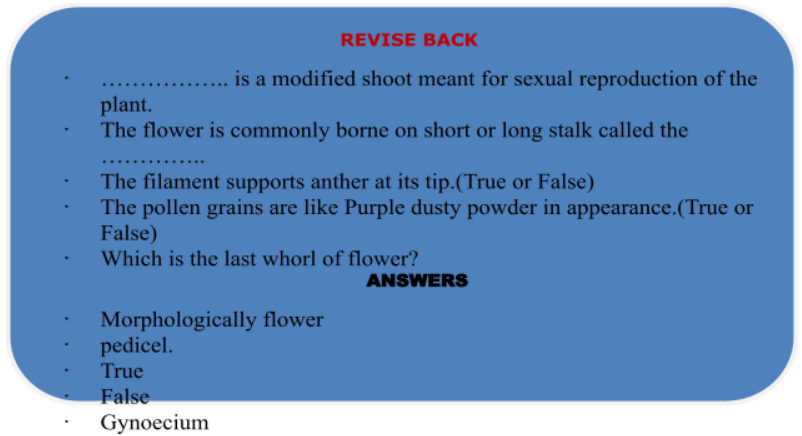