Collisions may be either elastic or inelastic. Linear momentum is conserved in both cases. A perfectly elastic collision is defined as one in which the total kinetic energy of the particles is also conserved.

In an inelastic collision, the total kinetic energy of the particle changes. Some of the kinetic energy is stored as potential energy associated with a change in internal structure or state, and is not immediately recovered. Some of the energy may be used to raise the system (e.g. an atom) to a state with higher energy. Or, it may be converted into thermal energy of vibrating atoms and molecules or into light, sound or some other form of energy.

In a completely inelastic collision, the two bodies couple or stick together.

The elasticity of collision may be measured in terms of a dimensionless parameter called the coefficient of restitution (e).

For an elastic collision e = 1

Elastic Collision in One Dimension 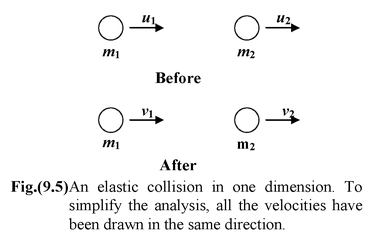 Figure (9.5) shows a one - dimensional elastic collision between two balls. 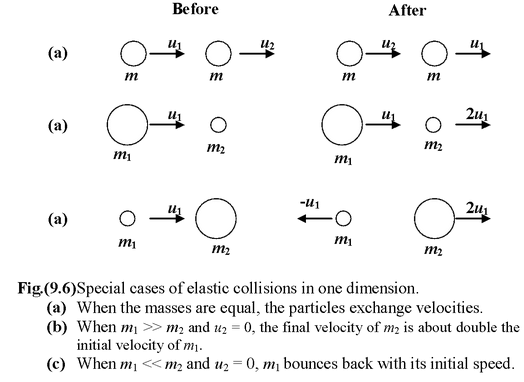 First, when the particles have equal mass, and second when one of them, say m2, is initially at rest.

After solving, we get

v1 = u1and v2 = 2u1, which means that m1maintains its initial velocity u1but it imparts double this value to m2.

(b) the total horizontal distance covered before the particle stops bouncing.

After first impact, let v1 and θ1 be the velocity and angle of rebound, as shown in the figure.

(a)The total time of flight is 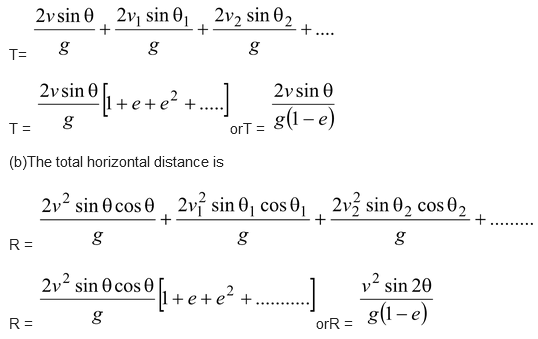 A wedge of mass M and angle α can move freely on a smooth horizontal plane. A smooth sphere of mass m strikes it in a direction perpendicular to its inclined face and rebounds. If the coefficient of restitution is e, then find the ratio of the speeds of the sphere just before and just after the impact.